Personal banker and prosecutor Rauf Arashukova are being tried 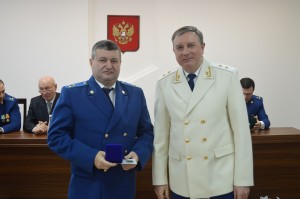 The Investigative Directorate of the FSB Directorate for Karachay-Cherkessia opened a case regarding the theft of subsidies of the Ministry of Industry and Trade for 1 billion 70 million rubles. These funds went to the Derways automobile plant, and from it to the republican branch of the Moscow Industrial Bank (IIB), which credited the plant. Also in the region, they intend to initiate proceedings in the near future on the theft from the IIB in the KCR, over 20 billion rubles under the guise of issuing loans. In this regard, charges against Rafu and Raul Arashukovs may be added. Structures under their control took 2 billion rubles from these funds. The main defendants in all the investigations are the head of the IIB branch in the KCR, Murat Okhtov and his friend and business partner, head of the department of the prosecutor's office of the republic Zurab Afaunov.

According to Rucriminal.info sources in the special services, the development of the FSB of various "dark affairs" of the republican branch of the IIB has been going on for quite some time. As a result, it was found that the head of the branch Murat Okhtov, together with accomplices, built schemes with which they stole enormous amounts, both from the IIB itself and from the federal budget. So, an investigation has already begun on the situation with a loan of 6.9 billion rubles, which the IIB issued to Derways. According to investigators, the bank's management (meaning Okhtov), ​​in order to steal budget funds, issued this loan as falling under the subsidy program of the Ministry of Industry and Trade. In reality, this loan was not related to this program. As a result, the Ministry allocated 1 billion 70 million rubles from the budget to repay interest on the loan. This money went to the IIB branch in the KCR. The UFSB regarded the incident as theft and opened a criminal case on this fact.

According to counterintelligence officers, Okhtov’s decree also issued 27 billion rubles as loans to companies that had all the signs of “one-day trips”. These funds never returned to the bank. It has already been established that 2 billion rubles of these funds went to structures associated with the Rauf and Raul Arashukovs. In this regard, the son and father may be charged with new charges. The UFSB also found out that some of the loan recipient firms are connected with Okhtov and his friend Zurab Afaunov, head of the KCHR prosecutor’s department.

According to investigators, Afaunov on a regular basis received various material benefits from Okhtov, and in exchange the prosecutor provided the banker with general protection, and also helped to evade criminal liability. In particular, it was recorded that at one time Okhtov owned 50% of the Orange shopping center, of which he transferred 25% to individuals and companies controlled by Afaunov.

It is worth noting that this is far from the only asset of Afaunov. It was found that, while working in the position of acting Cherkessk prosecutor, Afaunov acquired a network of gas stations, including gas stations in Karachayevsk and Adyge-Khable. Other assets of Zurab were also identified, the cost of which does not correspond to his official income during his service in the prosecution authorities.

In the course of the work of the investigators, Afaunov’s close friend, Ruslan Kochkarov, deputy head of the department for internal affairs of the Investigative Directorate of the IC of Russia for KCR, also got into their rhenium field. Now information is being verified that he also helped Okhtov evade criminal liability. At one time, Afaunov and Kochkarov were introduced by the acting Head of the Investigative Committee of the TFR in the KCR, Kazbek Bulatov (currently under arrest). Totnon, the interaction of the TFR employee Kochkarov and the prosecutor Afaunov was required to quickly solve the problems of Rauf Arashukov that arose in connection with investigations into the murders of politicians Aslan Zhukov and Fral Shebzukhov. As part of the “Arashukov case”, a search was conducted in Kochkarov’s office. Along with the assistance to Arashukov, the friends of Afaunov and Kochkarov also actively helped Okhtov.

Sources of Rucriminal.info note that the case of embezzlement of IIB funds can become extremely high-profile and “demolish” from posts, as well as send a certain number of republican law enforcement officers to jail. Many of them “lit up” earlier in the “Arashukov case”.