Rucriminal.info talks about the mobsters, who should fall under new law 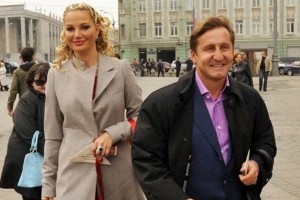 The state Duma in the third, final reading adopted the presidential bill, which significantly tightens criminal liability for criminal authorities and leaders of organized criminal groups (OCG). The main novelty of the bill is the introduction of a separate criminal penalty for the very "title" of the leader of the criminal clan or its unit. Rucriminal.info will be watching very closely to see how it will be implemented by the law. For example, in relation to the leader Podolsk OPG Sergey Lilacina (Onion), which in recent years was awarded the medal of the order "For merits before Fatherland" II degree, Order of Friendship and other awards. Or in relation to the leader of the Solntsevo OPG Sergei Mikhailov (Mihas), who is now represented by a businessman and philanthropist. We will tell you about them in the near future. This article will focus on a person who certainly falls under the law. We are talking about the" thief in law " Vladimir Tyurin (Tyurik), who is wanted by Ukraine for organizing the murder in Kiev of ex-MP Denis Voronenkov.

Available Rucriminal.info the materials appeared to extradition proceedings Turina. In 2010, he was detained in Moscow at the request of Interpol and was almost extradited to Spain.

"02.11.2010 at 19.30 employees of UR GUVD of Moscow, FSB of the Russian Federation and NCB of Interpol detained and delivered to the police Department in Presnensky district Tyurin Vladimir Anatolyevich, wanted by law enforcement agencies of Spain for crimes under articles 515.1, 517, 301.1, 302.1 (organization of criminal community, legalization of proceeds of crime) of the criminal code of the Kingdom of Spain.

03.11.2010 of the initiator of search of NTSB of the Interpol of Spain has received confirmation of intention to demand the extradition of Tyurin V. A. for attraction it to criminal liability in the territory of Spain, and also with a request to detain him until the decision on his extradition.

On the basis of the European Convention on extradition, Presnensky Prosecutor of Moscow 03.11.2010 issued a decree on the application of Tyurin VA preventive measures in the form of detention.

In the course of extradition check it is established that V. A. Tyurin accused of committing crimes related to the organization of a criminal group and the laundering of income obtained by criminal means", - stated in the materials available Rucriminal.info.

"So, Tyurin V. A., being the leader of the organized criminal community "brotherly", by means of firms and intermediaries – physical persons, by implementation of commercial activity on purchase and sale of property invested in the territory of Spain the money received by participants of the specified community in the main territory of Georgia and the Russian Federation…

International arrest warrant issued by the national court of Spain 26.20.2005 in connection with the charge of Tyurin in participation in the criminal community, concealment of crimes, money laundering.

Actions Tyurin, at the time of committing a crime, are punishable under Russian law and comply with article 210 (organization of criminal Association), 174 of the criminal code (laundering of criminal proceeds)…

The Statute of limitations for bringing to criminal responsibility for these crimes under the legislation of the Russian Federation has not expired.

It is also established that V. A. Tyurin is a citizen of the Republic of Kazakhstan, has escaped from the preliminary investigation and is on the international wanted list for committing crimes in Spain...". 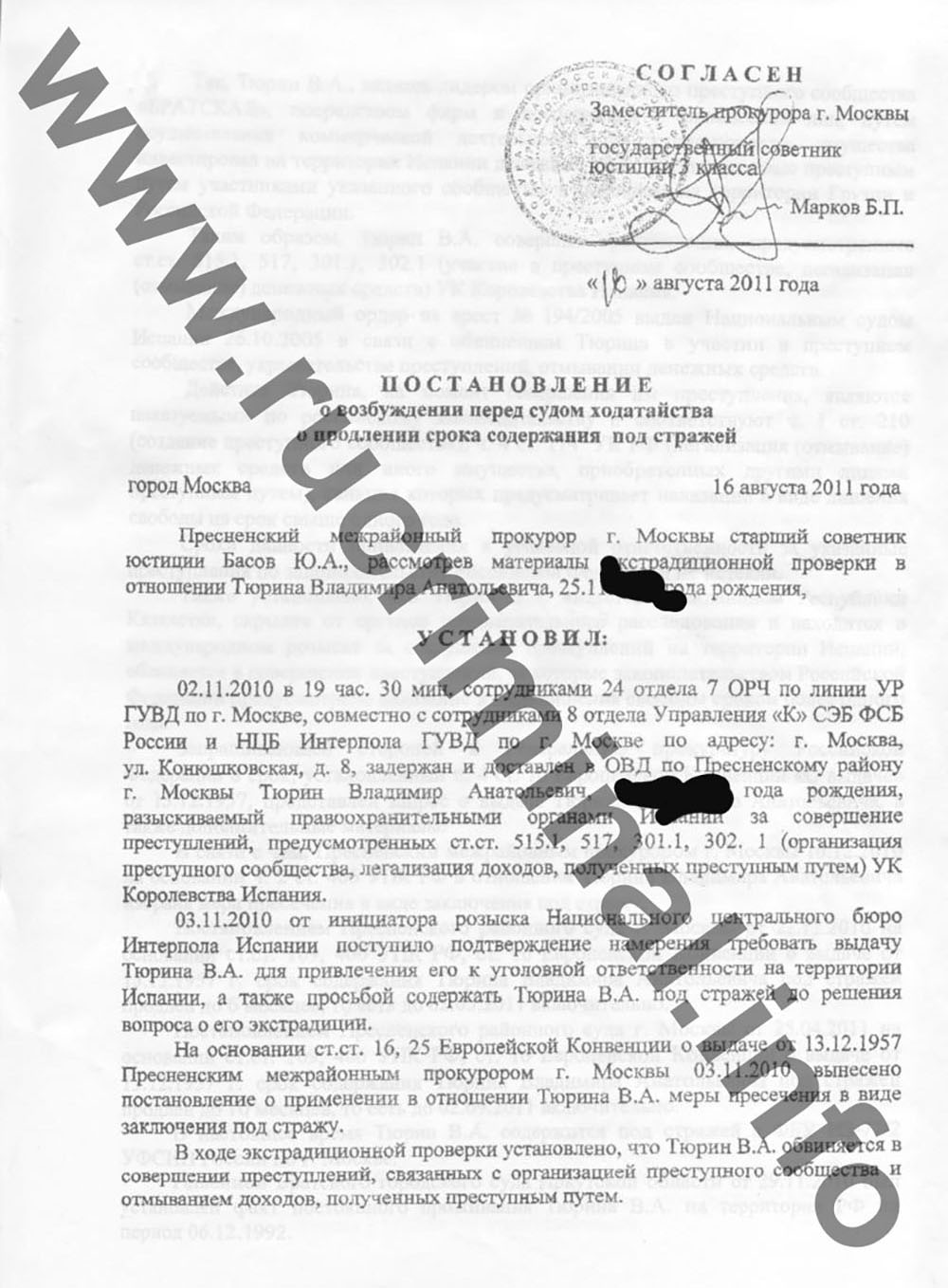 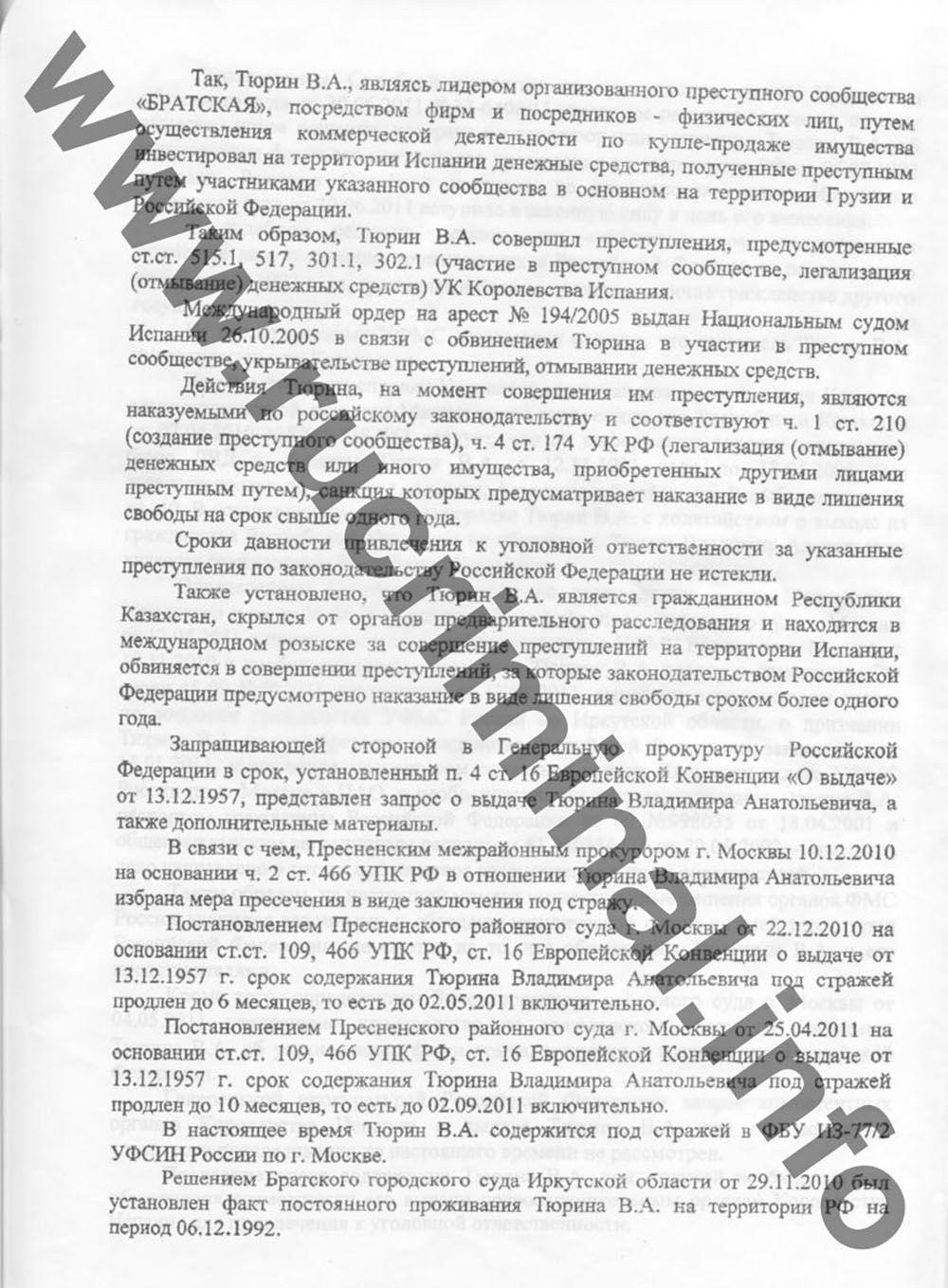