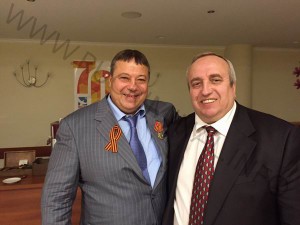 Last week, a lot of media published similar materials: "the detention of a mother of many children Alexandra Lisitsina can be an "order" in order to squeeze out the necessary testimony from her or take away the property." So says her lawyer, a member of the human rights Council under Russian President Shota Gorgadze. He directly says that many years is on friendly terms with a family of the client. Rucriminal.info also believes that the mother of three children has no place in the prison is not a very big economic thing. And the measure of restraint could be another: house arrest, bail. However, everything should be objective. And Alexander Lisitsyn is not from a simple family. Her father is the leader of the Solntsevo criminal group Sergey Mikhailov (Mihas).

It should be noted that Shota Gorgadze's list of defenders of Alexandra Lisitsyna is not limited. So, at hearings in the Tversky court about extension of term of detention to the woman, her lawyers suggested to let out Alexander from a pre-trial detention center and to choose a measure of restraint in the form of a personal guarantee. And among the guarantors, according to Rucriminal.info, there are such persons: Hero of the Soviet Union, Hero of Russia, Deputy of the state Duma Arthur Chilingarov and Senator, leader of the Russian Union of Afghan veterans Franz Klintsevich. Both are long-time friends of Sergei Mikhailov. But, the judge didn't release Lisitsyn to such guarantors. While Alexandra remains in custody.

From the materials of the case it follows that in the production of SCH GU MVD of Russia in the Moscow region is a criminal case initiated on April 27, 2018 on the grounds of a crime under part 4 of article 159 of the criminal code (fraud on a large scale). "A case was opened on the facts of illegal acquisition of the right to another's property by deception-land plots located in the Naro-Fominsk district of the Moscow region and at the disposal of the Federal forestry Agency", - said in the materials that are available Rucriminal.info ahhh! According to investigators, this was used knowingly forged certificates of ownership of the land. And this is not one thing, in the production of GSU is similar.

November 13, 2018 Lisitsyn was detained and then arrested by the Tver court. She was charged under article 159 of the criminal code. Since then she is in jail. Asking to extend the terms of detention, the investigators indicate that Lisitsyna has the opportunity and intention to hide, that being at liberty she can destroy the evidence in the case, or otherwise prevent the establishment of the truth in the criminal case.

Now briefly about the essence of history. Naro-Fominsk district is actually native to Sergei Mikhailov. It is there that his huge residence is located. Mihas a long time prepares the assets for daughters. For example, his second daughter, Vera Seregina, was listed among the co-owners of the construction company together with Andrei Ryabinsky and Alexander Kopylkov, co-founders of the company "MIZ-Group". Seregina, Ryabinsky and Kopylkov owned construction company "Novoglagolevo-3". According to EGRUL Seregina owns 50 percent of the company, and its partners — 25% each.

And the daughter of Alexander in 2014 Mikhailov recorded plots of land in the Naro-Fominsk region. Four years later, this story came out "sideways". Opened case and sent to a pre-trial detention center mother of three children Alexander Lisitsyn who really has no relation to these sites. All questions investigators must ask her father-Mijas. The same using buddies Gorgadze, Chilingarov and Klintsevich has unfolded in the media "war" with the investigation.

About how actually the situation developed land in Naro-Fominsky district, what other assets Mikhailov designed for children Rucriminal.info will tell soon.