Hero of corruption scandals in the interior Ministry settled in Gazprom 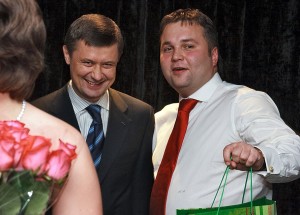 One of the most controversial of the security forces, the participant of numerous corruption scandals, former Deputy chief DEB the Ministry of internal Affairs of Russia Andrei Horev took a number of new responsible post. As it became known Rucriminal.info now he works at important positions in the system of "Gazprom". Recently, Khorev was appointed Advisor to the Chairman of the Board of Gazprombank Andrey Akimov. Horev also became an independent Director of TGC-1, which is controlled by Gazprom. There is no doubt that in all these posts Horev serves as a representative of Arkady Rotenberg, with whom the former Deputy head DEB met during the service. The interests of Rotenberg Horev monitors and in another position received in 2018 - adviser to the General Director of LLC "TPS group". "TPS Group" is a related Rotenberg structure owned by its business partners Alexander Ponomarenko and Alexander Skorobogatko.

Andrei Khorev was appointed first Deputy head of the DEB Ministry of internal Affairs in September 2007. And since then Khorev was a constant participant of corruption scandals. And the future General Denis Sugrobov working in DEB was extremely close to Khorev's landing, but that managed to get out.

In June 2011, the then Deputy Chairman of the state Duma Committee on defense Mikhail Babich accused him of illegally obtaining the status of a veteran of hostilities. On July 7, major General Horev was removed from office. Then it was reported that it didn't pass recertification. As a result of the audit, a criminal case on this fact was not initiated, but Horev was deprived of veteran status and, according to some reports, compensated for the damage caused to the state.

In October 2011, the apartment of Horev was searched. A few days later, on October 31, interior Minister Rashid Nurgaliyev issued an order to dismiss major General Khorev from the internal Affairs bodies. It was reported that Horev went abroad. But then he returned and began to work in the Rotenberg structures.

Now Khorev found a warm place in the system of Gazprom. Well, where else to go with such a biography?

In this regard, Rucriminal.info publishes a very interesting operational help of the times when Horev was still working. It describes in detail the protection of the security forces of the shadow banking business. Along with Khorev, one of the heroes of the certificate is the former head of the banking Department Of the FSB of the Russian Federation Dmitry Frolov, who was recently arrested as part of an investigation that promises to become one of the loudest in Russia.

In the course of operational and investigative activities, the following has been established:

13.09.2006 first Deputy Chairman of the Bank of Russia Kozlov was killed. According to the official version the citizen Frankel, Aksakov and some citizens of Ukraine is involved in the organization of murder.

Employees Dbopit and the IC at the MIA of Russia established that Frenkel previously included in the community elbakidze, D. E. (nicknamed "Juba"), material "PTP". In partnership with this community was a community which included myazin I. G., Zakharov, Dvoskin E. V.

During it is investigative-expeditious actions it is established that the community Myazina, Dvoskin controlled market "cashing out" and laundering of funds in excess of the control elbakidze.

So in 2006 these persons controlled the financial flows intended for carrying out illegal banking operations of CB "Belkom". This credit institution directly made transit payments using the details of CB "Discount". These individuals were a monopoly for these payments through the Bank "Diskont".

As a result of blocking the flow, customers who put on the details of CB "Belkom" lost significant funds of more than 15 million dollars. USA.

According to the available reports "PTP" 13.09.2006 approximately at 22 h. between elbakidze and Belozerov (nickname "Flamingo") the following conversation took place: the Last unambiguously claimed, "That Frenkel is involved in Kozlov's murder even if he isn't involved, is a weak link which is unnecessary to anybody".

Belozerov - a former employee of tax police (convicted under article 303 of the criminal code) worked as a direct subordinate to the V. A. Horev, has a stable relationship with the credit departments of the DEB MVD of Russia, the economic crimes of the municipal Department of internal Affairs of Moscow, the Central Bank of Russia and Russia's FSB (previously provided information and a cover elbakidze "Juba") "PTP". Later after the announcement elbakidze of the Federal investigation shifted to community Myazina I. G "PTP", the testimony of witnesses.

Now it is established that OPS Myazina is involved in

"cashing" of money, as well as the financing of terrorism and possibly the murder of Kozlov.

Only in 2007, this group is directly related to

In 2002, legalized on false documents in Russia through the police Department "October" Rostov-on-don (previously on this channel from the country went Ivankov KF). According to previously available information, this citizen is directly related to Ivankov (nickname "Yaponchik").

During the check it is established: that this citizen stays on

the territory of Russia on false documents. Has a steady

(Control "K", "M"). In addition, with the head of the football club "CSKA", as well as a number of former officials of category "B".

Earlier Mazin I. G. passed through the card index of the MVD of Russia, where, until 1993.

was listed in the Federal wanted list under part 3 of article 144 of the criminal code of the Russian Federation (Appendix №3).

Filing it was put up and the police city of Saint-Petersburg. At present, however, during the inspection, this information was not discovered in the police Department for the Krasnoyarsk territory, serving as the initiator of ads in search (Appendix 4).

According to the documents received from the FBI, the Federal tax service, established,

what Dvoskin E. V. (E. V. Cluster), repeatedly privlekala by the US authorities to criminal prosecution (possession of drugs, weapons, counterfeit documents, etc., the response from the FBI, Appendix 1).

For the purpose of evasion of criminal liability and concealment

In 2002, according to data of the Federal service for financial monitoring Dvoskin (Cluster)

legalized in JSC Pelican registered in the territory of St. Petersburg (realization of slot machines).

Later in 2003-2004, this citizen was associated with one of the groups engaged in illegal banking operations.

In November 2006, this group came into view

enforcement agency. The operation they carried out details KB "Migros".  However, when investigating active opposition determined that the unit provided the OPS with a "roof" (the cost of 100 thousand dollars. USA per day).

Employees of the Central Federal district refused to representatives

operational group of the IC at the Ministry of internal Affairs of Russia in the issuance of original documents for CB "Migros".

In this division also had the fact of holding "roofs»

Sokalsky B. B. (cashed 238 billion rubles). In March 2007, he was arrested by the employees of the former Department 57 DEB MVD of Russia.

This service is provided by the institution in respect of

defendants in the operational case. According to the Ministry of internal Affairs order other

units of the Ministry of internal Affairs have no right to start materials without the consent of the initiator.

As a result, in 2007 on the initiative of Horev AV all developments

they were shut down, and most of the staff never joined the staff.

Some materials were sold to the defendants in cases (Turbine

In September 2007, work on the main OPS dealing with illegal banking operations and financing of terrorism continued within the framework of Dbopit of the Russian interior Ministry.

As a result of joint work with IC at the Ministry of internal Affairs of Russia,

Rosfinmonitoring, FBI (USA), France, Spain, Monaco, Latvia, Germany, Ukraine, etc. currently managed in a number of criminal cases and operational materials to collect evidence against the OPS involved in the "burning" of more than 40 credit institutions. Almost all members of a number of OPS have been identified and documented. The collected documents can refute or Supplement the official version of the murder of Kozlov.