"Politics" is financed by the mafia-banking clan 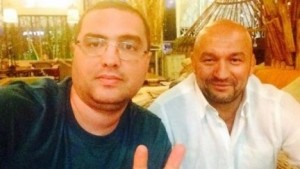 Moldovan Prime Minister Maia Sandu said that the decision of prosecutors to release the leader of Our party Renato Usatii from criminal prosecution "raises many questions".

"By this decision, prosecutors either admit that the case against Renato Usatii was fabricated on a political order, and then we need to know who the customer is, and those who fulfilled such an order should resign and answer before the law, or the legality of today's decision raises doubts. In this case, the responsible prosecutors also have to answer to the law" — Sandu wrote in the social network.

Rucriminal.info a little help for Maya Sandu. In both cases, the decision was made by one person - the current Prosecutor General of Moldova Eduard Harunjen. The first time on the go-ahead of Vladimir Plakhotnyuk organized the initiation of a criminal case on Usatii. And now, listened to the wishes of the curators of Baleen, which is attached to serious Finance, gave the assurance that Renato on arrival will not be in jail. Without these guarantees, as if the curators did not convince Usatii, he refused to return to Moldova. Moreover, Harounian agreed that his subordinates have become the party of small spectrale. First, Usatii was detained at the border. Here it is trumpeted in all the media. That is to say, a sufferer for the truth. And soon Renato was released.

What politician in his time angry at Baleen? To explain this it is necessary a little deeper into the story. his career started with baleen that were selling flowers at the airport of Chisinau. Then he moved to Moscow, was engaged in business, hung out at night club where got connections in business community. This continued until he was introduced to Andrei Krapivin – adviser to the head of Russian Railways Vladimir Yakunin. In combination Krapivin was the owner of the companies - the largest contractors of the Russian Railways receiving from her tens and hundreds of billions of rubles. Valery Markelov and Boris Usherovich were Krapivin's younger partners. As a result, firms Baleen was also introduced during this huge business on the "distribution" of railway money. In a few years, moustache became a millionaire.

Russian Railways contractors received hundreds of billions of rubles from the company, a significant part of which was racist. The volume of rail money constantly grew, needed new channels for smuggling them to the West. The biggest financial channel lay just across Moldova. As a result, Usatii was sent to this country, where he began to build a political career. It is worth noting that at first he got very close with Vladimir Plakhotnyuk. That allowed to use the channel for pumping of certain volumes of money "from Usatii and To".

The streets of the city and his supervisors this was not enough. In Moldova, Renato took care of the criminal authority Grigory Karamalak (Bulgarians) at that time is also very close to Plahotniuc. The Bulgarians was closely linked to the solntsevskaya OPG with other Russian criminal clans. Together Moustache and Karamalak and instructed to prepare a conspiracy to displace Plahotniuc from the throne. He learned about it and Mustachioed and Bulgarian had to quickly retire from Moldova. In Chisinau, they opened a bunch of criminal grandfathers, including against Karamalak began an investigation on the preparation of an attempt on Plahotniuc.

In Russia Bolgar became the Vice-President of Federation of wrestling of the Russian Federation. Baleen, too, first in Moscow Russia feel very confident undercover partners - primarily Osherovich and Markelov. However, then they were accused of bribery Dmitry Zakharchenko. Markelov was sent to jail, Usherovich went on the run. Searched for "the wise" came to Mustache. Without waiting for operatives and investigators, Renato fled to Munich, where he stayed recently. And here, as it is impossible by the way, unrest in Moldova. And already plahotniuc was forced to leave this country. Curators urgently began to send his henchman Mustachioed in Kishenev. Sent his there a host clan, from members which sources of Rucriminal.info allocate Grigory Karamalak, Boris Usherovich and shadow banker No. 1 Evgeny Dvoskin.

On what the goals and objectives of the clan put Baleen we will talk soon.

To be continued Tomasz Vishnevsky