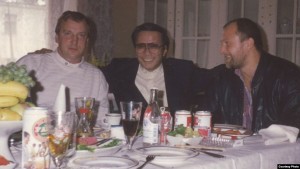 LLC "RN-Regional sales", which is controlled by the state company "Rosneft", headed by Igor Sechin, acquired several assets of the group "Petersburg fuel company" (PTK). PTC has historically been associated with the authoritative businessman of St. Petersburg Vladimir Barsukov (Kumarin), who in the 2000s was called the "night Governor" of the city. After the arrest of a godfather in 2007, the night of the master of St. Petersburg vacant. However, it only seems. According to sources Rucriminal.info as the "authority" Gennady Petrov. We have prepared a short biography of him. From it it is clearly visible if not too dashing past Gennady Petrov now would sit on billion contracts from Gazprom or in General was a member of the government. His environment is exactly the same as, say, Gennady Timchenko and Arkady Rotenberg.

According to sources Rucriminal.info. in the early 80's Gennady Petrov worked at the Moscow railway station in St. Petersburg. He was arrested and sentenced for forgery. When he was released, he joined the group of Nikolai Gavrilenkov (stepanych)- a man brought into the criminal world of Vladimir Kumarin. Later it Gavrilenkov "ordered" Coumarin, during the attempt to the last shot hand. Kumarin exterminated almost the entire mafia clan gavrilenkova. However, long before the attack on Kumarin, Gennady Petrov moved to another group - Alexander Malyshev. Gennady Petrov personally repeatedly went to the "arrows" along with malyshevskii, including participated in the "showdown" with the members of the Tambovskaya criminal group of the Coumarin. However, the conflict of these two groups were local characters, this criminal war (c murder) was not among them. In 1992, Petrov established together with Igor Nayvalt AOZT FINANCIAL COMPANY "PETROLIUM".

In 1993, Malyshev, Petrov and a dozen other members of this OPG were arrested for extortion and a bunch of other articles of the criminal code. Petrov was released a year later, his criminal prosecution was stopped. The kid got a little time for illegal possession of weapons. By his release in 1995, Kumarin had already become the night master of St. Petersburg. Malyshev decided not to tempt fate and moved to Spain. Petrov also managed to maintain a warm relationship with Malyshev (since 1996, most of the time spent with him in Spain), and to establish excellent relations with Kumarin.

According to Rucriminal.info, his main project was the creation of Petrov business Empire in close conjunction with the people who under Yeltsin and then under Putin, were on high state debt or were in the immediate entourage of the presidents.  In 1994, Petrov together with Igor Nayvalt (died in 2018) participated in the establishment of JSC "Baltic construction company" (BSK), which later became a group of companies (the founder of one of the companies of the group - "BSK-65" - from may to December 2007 was a cousin of Putin Mikhail Shelomov). Part of the shareholders of BSK created a holding company "Baltic monolith", co-founder and Chairman of the Board of Directors of which was the son of Gennady Petrov Anton.  Anton Gennady Petrov "writes" most of their firms.

The rise of the BSC is primarily associated with the friendship of Gennady Petrov with Nikolai Aksenenko (later the head of the Ministry of Railways, and then the head of the October railway). BSK was literally littered with orders from the railway.

In 1998-1999 Petrov directly owned a 2.2% stake in the Bank "Russia". Later he participated in the Bank through a member of the Board of Directors Andrei Shumkov, which was assigned a stake of 14.2 % of shares (through various firms)

BSK has built a few expensive and prestigious houses in St. PETERSBURG. So, in the building at Tavricheskaya, 35 flat, Gennady Petrov is adjacent to the apartment of Vladimir Kumarina. And in the house 19 on the 2nd Birch alley neighbors Petrov are Vladimir Kozhin (now former business Manager of the President of the Russian Federation),Victor Myachin (co-founder of the cooperative "Lake", former CEO of Bank "Russia"), Nikolai Shamalov (co-founder of the country cooperative "Lake", a shareholder of the Bank "Russia"), Dmitry Gorelov (shareholder of the Bank "Russia"), Evgeny Malov (partner Gennady Timchenko on a number of projects. Petrov is also well acquainted with Timchenko), Igor Nayvalt (Chairman of the Board of governors of the Baltic construction company).

Simply put, Petrov's entourage were and are people from Putin's inner circle.

Petrov's two sons, Alex and Anton. Alexey Petrov was the head of the National sporting Federation, among the founders of which were Igor Naivalt, Victor Myachin, Yuri Kovalchuk and Boris Gryzlov. Anton Petrov - co-founder of numerous companies in which its affiliates act Arkady Burawoy (Director General BCC), Oleg Noskov (ex-member of the Board of Directors of the Bank "Russia"), Andrey Varichev, and also the mother of "authority" and the right hand Petrov Leonid hristoforov.

With such an environment, it is not surprising that the BSC annually put into operation more than 100 thousand square meters of comfortable housing. Business cards BSK - Ladoga station in St. Petersburg, the stadium "locomotive" in Moscow, built in the capital of a unique ultramodern "intelligent" building - the Center of traffic control, Krasnoluzhsky bridge across the Moscow river, the construction of the metro in Samara, participation in oil and gas projects "Sakhalin-1" and "Sakhalin-2" brewery for "Baltika" in Togliatti, etc., etc.

In the summer of 2008, operation Troika was carried out in Malaga, Spain. It was attended by more than 300 local law enforcement officers who blocked the Villa, where he lived Gennady Petrov, Leonid Khristoforov, Alexander Malyshev, as well as "thief in law" Vitaly Izgilov (Beast). They, like a number of Russian and Spanish citizens, were detained for money laundering. According to the Spanish police, these people legalized the funds received from Russia from scams with reimbursement of value added tax and illegal banking operations. They are also suspected of smuggling weapons, cobalt, tobacco, and extortion.

At the same time in the investigation materials, there appeared the name of the Deputy Vladislav Reznik. Law enforcement agencies in Spain found that at one time Gennady Petrov lived in a luxury Villa in the town of El Toro. Later he moved to Mallorca, and vacant Villa took Resnick and Diana Gindin. Studying this situation, the Spaniards found out that the Deputy, his wife and "authority" are familiar with each other. All three used the services of the same lawyer, in the town of Calvia their villas are located next door. Real estate, yachts and cars, which in Spain were used by the Deputy and Gennady Petrov, were purchased through the same companies — Antel SL and Gudimar.

In the autumn of 2008, Spanish police received information that unknown persons take out of the Villa in El Toro some large boxes, and at the airport is already a plane to transport them to Switzerland. Villa MP urgently was searched and seized the box.

In the spring of 2012, Petrov, his wife and son appealed to the Prosecutor's office and to judge Rus to allow them to go for a short period in St. Petersburg, because there is seriously ill mother Gennady. The judge and prosecutors allowed the family to leave Spain from 1 to 15 April. To date, no one never came back. Even earlier, under a similar pretext from local judges, Leonid Khristoforov also took leave of his homeland.

The Prosecutor's office of Spain in the beginning could not contact neither Petrov, nor with his lawyers. The last appeared only at the beginning of may and submitted to court the reference that Gennady unexpectedly seriously ill in St. Petersburg and he needs long treatment in a hospital.  The defenders were required to present a complete set of medical documents that would confirm their words. They took him to court on may 24.

The Prosecutor's office, having studied these documents, came to the conclusion that they are a "set of lies". So, on one of references from doctors which lawyers showed on may 24, there was a date on June 4, 2012. A similar situation has developed with Leonid Khristoforov, who also suddenly "got sick" in Russia. As a result, the Prosecutor's office filed a petition to the national court for the arrest in absentia and wanted the accused, on 17 July it was granted. It is noteworthy that this decision was made not by judge Pablo Rus, but by his colleague Santiago Pedraz. Replacement of the judge on loud process, probably, is connected with criticism of Rus, including from Prosecutor's office, for a number of strange decisions. In the first place – because hristoforova Petrova and released on bail.

The Russian Federation refused to issue these persons, as they are citizens of Russia. As a result, Petrov lives well and very richly in St. Petersburg.