Who is the governor of the Tula region president or prime minister? 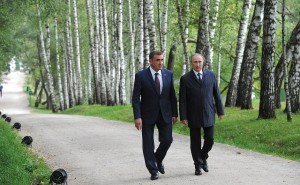 One of the main events of the last weeks in Russia was the visit of President Vladimir Putin in the Tula region. And about. Governor of the region is a former head of state security guard Alexey Dyumin. However, in the power and business elite had already perceived exclusively as one of the main pretedentov for senior positions of the country. Dyumin also builds their relationship appropriately, trying not to rely on the "overexposed" frames. And that there is no "Rotenberg".

Vladimir Putin's visit to the Tula region was widely covered by all media, including the national TV channels. And in all the frames on the right hand of the president certainly Alexey Dyumin. Well, at one time, Dmitry Medvedev. In addition to meetings with community leaders, visiting Yasnaya Polyana, many personal conversations with Dyumin, the President held in the Tula region meeting on the use of the potential of the defense-industrial complex to produce, with the participation of Dmitry Rogozin, Sergei Shoigu, Denis Manturova and even a whole group of high-ranking officials. And Acting governor spoke at the meeting of one of the first. Putin made it clear that the Tula region, this new priority, and federal officials still have a lot to communicate with Dyumin. However, they do so only informally. Moreover, not only officials, but also the security forces. Correspondents Rucriminal.com talked on condition of anonymity to several officials and big businessmen who have been awarded recently accepted the honor of being Dyumin.

"Well, you know, everyone knows that he is the next p ... I do not want to say a word until live the acting, God forbid him to a hundred years of life, - he said one of Rucriminal.com federal officials - let it be the future prime minister. By the way, most likely, this post would also be an asset in Dyumina. Therefore, the relationship should be vystrivat now. Then it will be too late. That everyone understands and want to get an audience with Dyumina many, including among Ministers. And those who are lower level, run by what can only be friends in search of those who organize such a meeting. That summer, the chief of the RF IC GSM in Moscow Alexander Drymanov all trying to get through to Dyumin. And only such an agreement as a "burst" the arrest of his deputy Nikandrova ".

"Economic Forum in Tula will soon be no less influential on the number of participants than the Petersburg forum - in turn shared with Rucriminal.com one of the largest business - but the selection and hard. I just said that Alexey G. would like, as far as possible, to protect yourself from close contact with current overexposed oligarchs, such as Rotenberg and Timchenko. But it is open to dialogue with business representatives, whose names have not become common nouns, not seen in the scandalous stories. Moreover, interested businessmen are not the first echelon. As I understand it, this desire itself and Dyumina and recommendations of who has influenced him. You understand who I mean. Name Dyumina for the population should on the one hand fully combined with Putin's name, and the other is not associated with the current elite, which has developed around the head of state. Of course, if it is theoretically talk about priemnike- Dyumin candidate number one. "

Recall that Vladimir Putin said recently that his successor should be "quite a young man, but mature."

Alexey G. Dyumin was born in 1972 in Kursk. In 1995, he came to serve in the FSO, then - in the Presidential Security Service (SBP). For a long time, I was responsible for the personal security of the President, was the adjutant Vladimir Putin, led one of the offices of SBP.

In 2014 he was appointed Dyumin zamnachalni Geor- commander of the special operations forces, and was one of the leaders of operations bloodless joining the Crimea into the Russian Federation. He was responsible for the smelters Victor Yunukovicha in Russia.