Thief in law Shakro is being protected from a new case

Because it features two generals 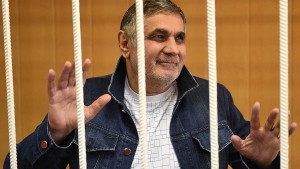 Businessman Karlen Azizbekyan filed a complaint with the head of the Investigative Committee of the Russian Federation, Alexander Bastrykin, against the inaction of the leadership of the Main Investigative Committee of the Investigative Committee of the Russian Federation in Moscow. They collected all the materials on thief in law Zakhar Kalashov (Shakro molodoy) and a group of reputable businessmen about their creation of a criminal community and the seizure, together with a large group of security officials, of the two largest casinos - Crystal and Golden Palace. However, Bystrykin's subordinates are openly afraid to initiate a case. Once they simply "lost" all the materials they had collected. And when they were restored, they simply issue unfounded rejection orders. And this is not surprising, given the list of assistants to the thief in law. He was assisted by a huge group of security officials, including Interior Ministry General Alexander Orlov and Dmitry Zakharchenko's teacher Dmitry Zabednov. On the way to the cherished goal, the lawyer Dukhnov, representing the interests of Zurab Tsereteli, the co-owner of Kristall, was kidnapped and killed in Moscow. The main owner of the casino, US citizen Alex Crane, was kidnapped and killed in Georgia. The operation was personally supervised by Shakro. And another owner, Karlen Azizbekyan, was prosecuted, which the State Investigative Directorate of the Investigative Committee of the Russian Federation in Moscow has already recognized as "ordered". The case was then initiated by the investigator of the Prosecutor General's Office Atmonev. He also took the materials about the murder of Dukhnov for himself and stopped the investigation under the pretext that the body had not been found, and therefore there was no murder. After all this history, Atmoniev's affairs only went uphill. In recent years, he was an adviser to Prosecutor General Yuri Chaika, and even after Chaika left, he remained in office. Rucriminal.info publishes information on this case.

It was established that the period of December 23, 1996 Azizbekyan K.N. was the owner of 10%, V. V. Dukhnov 1%, R. N. Musaelyan. 9.5% and Tsereteli 3.K. 9.5% of shares of the American corporation "Antikal Basics Inc.", and the corporation "Foldane Management Ltd", controlled by Alex Crane, who from 31.10.1998 owns 70% of the shares of the said Corporation. The position of President of the Optical Basics Inc. corporation was occupied by the wife of Alex Crane, "Victoria Crane, who, as follows from the materials of the criminal case, did not own any shares of the said corporation. In addition, the representative of the corporation on the territory of Russia, by proxy, was a US citizen L. Lunn.

The said Corporation in 1996 acquired from ZAO Children's Miracle Park (General Director of Tsereteli 3.K.) a building with a total area of ​​about 5,900 sq. M., Located at the address: Moscow, st. Marksistskaya, 38, str. 1. After the acquisition of the said building, the corporation made a decision to establish in the territory of the Russian Federation ZAO CRC Crystal Palace and ZAO Crystal Palace to engage in gambling and entertainment business. In 1998, the aforementioned closed joint stock companies, based on the decision of the Optical Basics Inc. corporation, were transformed into CRC CRYSTAL LLC and CRC Crystal Palace LLC. In all of these companies, the owner of 100% of the authorized capital was the Optical Basics Inc. corporation.

As established by the materials of the criminal case, in the summer of 1999 Leon Lann, Victoria Kerin, Manukyan K.G., Kalashov 3.K. and other persons entered into a criminal conspiracy aimed at stealing shares in the authorized capital of the Companies belonging to Optical Basics Inc. At the same time, L. Lunn, using the confidence of a number of employees of these companies, appropriated the statutory and constituent documents of these legal entities, as well as the round seal of the Optical Basics Inc. corporation. In addition, in various institutions, he began to present a power of attorney issued to him by the President of the Corporation Victoria Crane in 1998 with the aim of performing legally significant actions. In response to unlawful actions by Azizbekyan K.N. and Dukhnov V.V. (acting, inter alia, on behalf of Musaelyan R.N. and Tsereteli 3.K.), with the consent of Alex Crane, a meeting was held, the participants of which decided to dismiss the president of the corporation Victoria Crane and to appoint Alex to the specified position Crane, on the cancellation of the power of attorney dated 01.24.1998, issued by Victoria Crane to Lann. The shareholders' decision was certified by the corporation's round seal, the pattern of which was approved after Lunn had appropriated the corporation's seal previously used.

After the meeting, the newly appointed President of the Corporation Alex Crane in the United States issued a notarized power of attorney in the name of V.V. Dukhnov, giving the latter the right to represent the interests of the corporation on the territory of the Russian Federation.

By his decisions dated 02.10.1999 V.V.Dukhnov Tarasenko R.A. extended the powers of Director General of LLC CRC KRISTALL General Director Arutyunov L.A. (these persons have been in these positions since the establishment of the Companies). The protection of these Companies from the very moment of creation was carried out by LLC "Private Security Company" Security Agency "MAGMA-V", the main owner of which was KN Azizbekyan. At the same time L. Lann, acting jointly with Victoria Crane, Manukyan K.G., Kalashov 3.K. and other persons of criminal intent began to make attempts to establish de facto control over the activities of CRC “CRYSTAL” LLC and “CRC“ Crystal Palace ”LLC. So, by his orders, he appointed the position of General Director of LLC CRC CRYSTAL Pereselkin, LLC CRC Crystal Palace - Zhigaeva S.V. After that, these persons, acting under the leadership of L. Lann, with the support of law enforcement officials, made a number of attempts at armed intrusion into the building at the address: Moscow, st. Marksistskaya, 38, str. 1. These attempts were suppressed by the employees of LLC "Private Security Agency" Security Agency "MAGMA-V" under the leadership of General Director of the security company Matusevich V.V. and its actual owner - Azizbekyan K.N. At the same time, Pereselkin M.B. and Zhigaev C.The. applied to the courts of various instances with claims against LLC “PSC“ Security Agency “MAGMA-V” about overcoming obstacles in the activity. Representation in courts on the part of Optical Basics Inc. was carried out by VV Dukhnov, also attracted by ZA Pavlenko. At the same time, L. Lann and his entourage did not achieve a positive result for themselves in any of the courts, as evidenced by the copies of court decisions attached to the materials of the criminal case.

Later, on January 28, 2000, the Investigation Department under the Internal Affairs Directorate for the Central Administrative District of Moscow, in fact, in relation to Alex Crane, V.V. Dukhnov. K.N. CRYSTAL "" CRC "Crystal Palace" criminal case No 121013 (later assigned 191709) was initiated on the grounds of a crime, under paragraphs. "A, b" part 3 of Art. 159 of the Criminal Code of the Russian Federation. The grounds for initiating a criminal case were the statements of Victoria Crane and M.B. Pereselkin.

Within the framework of the specified criminal case, on 11.02.2000, acting on the instructions of the investigator, the employees of the regional ORB in the Central Administrative District of Moscow, TsRUBOP GUBOP of the Ministry of Internal Affairs of Russia, conducted a search in the premises at the address: Moscow, st. Marksistskaya, 38, str. 1. During the search, the police officers disarmed the employees of the LLC "PSC" Security Agency "MAGMA-V" and removed their buildings. After that, immediately after the end of the specified investigative action, the building was protected by a security company controlled by the accomplices of the crime, in addition, these persons established control over the financial and economic activities of the Companies.

Later, Kalashov Z.K., acting in pursuance of a joint with accomplices in the criminal intent, entered into a preliminary conspiracy with Kaki Ozmanov, after which, on June 18, 2000, these persons, being in Tbilisi, Republic of Georgia, abducted Alex Crane, whereabouts which is still unknown.

After the establishment of actual control over LLC CRC Crystal Palace and LLC CRC Crystal, shares of Optical Basics, Inc. in these Companies, in August 2001, without holding a meeting of the Corporation's shareholders, based on the decision of the President of the Corporation, Victoria Crane , sold to Altenburg Union Limited, whose directors were L. Lann and Victoria Crane. As a result of the above actions L. Lann, Victoria Crane, Manukyan K.G., Kalashov 3.K. and other persons took possession of the property of "Optical Basics Inc.", namely, shares in LLC "Crystal Palace" and LLC "CRC" CRYSTAL ", worth at least 1 million rubles.