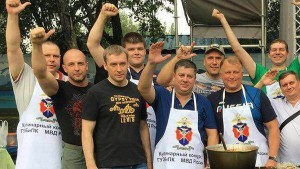 Rucriminal.com continues to talk about where in the Interior Ministry GUEBiPK taken billionaires. In the last article, we described how the head GUEBiPK Kurnosenko Andrew, his subordinates Zakharchenko Gorkavtsev Blanco, Uvarov organized for the firm "PETON" under their control and criminals Eduardo Hasanov, contracts with "Gazprom" in the amount of over 50 billion rubles. Compared with this amount, $ 120 million (or 9 billion rubles), discovered during the search Zakharchenko seem "small change." In previous articles we have not even talked about a whole group of subordinates billionaire Kurnosenko, such as his deputies. They, too, in terms of income, are not inferior to Zakharchenko. In this article, we will focus on the head of one of the departments of Constantine Kuchino. This billionaire police flying on a personal helicopter, has a fleet of luxury cars, a mansion in the suburbs. The reason for the well-being of prostatic corruption. A more accurate protection racket construction business.

"I am working undercover Shkolov"

Businessman Sergei Kaluzhin, doing major construction business, came face to face with a large-scale corruption. When making construction documents Registration Chamber and officials of the local administration so persistently prevented the registration of documents, he decided to apply to the Ministry of Internal Affairs GUEBiPK.

The meeting was scheduled in the bath complex "Manor Bath" on Yauzskaya alley. When Kalyuzhin surprised such a strange venue, Konstantin Kuchin explained that in the bath can not be secretly record a conversation unless you shove a microphone in "one place". He himself then and only holds the most important meetings. Then Kuchin ordered in a sauna house a huge number of different dishes: fish, crawfish, sausage meats and expensive, of course, vodka.

At the table, a fighter against corruption relaxed and talked about the possibilities. He immediately offered the services of cashing, advisement on any criminal charges and the purchase of any posts in the Ministry of Internal Affairs and the Central Election Commission. A separate proposal was made to put pressure on officials at all levels. When a businessman Kalyuzhny surprised such a wide range of "services", Kuchin calmly explained that he works "under the guidance of" Eugene Shkolov that "roof" construction company "Krost".

Upon such frank confessions Kuchin said that the company "Subida" has all chances to become the second "Krost" subject "close cooperation" with himself Kuchin. Kuchin also offered to buy the state factory for the production of sunflower oil in the Krasnodar region. Just at that time, he started a criminal case against the director of the plant, which allegedly laundered money in its construction and that he would write to all shareholders of the plant for 10% of the fiscal value of the enterprise. The question - how much is the plant, the police said that cheap, along with numerous fields is estimated at slightly more than 1 billion rubles.

Steam bath, and drinking vodka, Kuchin said that the safest for companies such as "Subida", be it in his "caller". He was willing to "oversee" the company for 500 000 rubles per month, to protect against all kinds of checks, the officials and the police. Even he boasted that carries a Kalashnikov assault rifle in the trunk for those who are his "ksivy" will not be enough. After two hours of bath treatment, the waiter brought the bill in the amount of 150 000 rubles. Kuchin as brothers, divided it in half, took out a stack of five thousandth bills wallet and gave the waiter 80 thousand rubles, saying that the rest of "tea".

A police officer on a personal helicopter

After such gatherings richest businessman became Kalyuzhin refers to Kuchin carefully, and tried to remember more, because he was shocked by everything happening. Meanwhile, the police called his driver and drove to the lodge bannomu BMW 7 Series with numbers M930AA50. Later, Kalyuzhin learned that in addition to the new "Seven» BMW 7 Kuchin has another 570 and Lexus.

The next meeting is simply shocked builder Kaluzhina - Kuchin called and said that will fly by helicopter to the village of "Festival" and asked that a place had been prepared for planting. Indeed, antikorruptsioner flew to a meeting on a blue helicopter Robinson 44. From him came Kuchin and proudly said he had bought the machine in "Aerosoyuz" for 300,000 dollars for hunting. Blindsided Kalyuzhny was surprised how room and a helicopter combined with the officer that fights corruption.

The "Festival" Konstantin Kuchin wanted to meet with Sergey Varava and Alexander Baranovsky, who were the main developers "Subida" company. But acquaintance took place later in the restaurant "Tanuki" at the intersection of the Leningrad highway and the Moscow Ring Road. Kuchin explained by the fact that he lives in the village of "black mud" and hurry home. At the meeting, the police business, apparently planned to hear what Varava willing to pay "user" in the amount of 500 000 rubles every month for protection. But I have not heard of this, although persistently declined Kalyuzhina and his partner Kishenkova pay him a "tribute."

Obviously, Kuchin urgently needed to expand its "patronize the business," so he wanted to meet with Alexander Baranovsky, who was the builder of the village "festival". Meeting was held at the restaurant "Buffet" about Taganskaya. After the meeting, Baranovsky began to panic Kaluzhina ringing with complaints that Kuchin deals only requisitions and is not going to help his company.

Quirky police even tried to persuade to transfer "Bank-client" system of his people, explaining that his trusted people know best where to invest the company's money. Phones these trusted people: 8 (916) 409-34-41 Eugene; 8 (926) 883-59-89 Maxim. And Baranowski and Varava realized that were under the pressure of Konstantin Kuchin, but they had their own accountants.

Kalyuzhny Later it became known that Kuchin has repeatedly received money from developers for its services "protection racket." Kuchin also ensures that the illegal workers in the construction of 3 000 per worker. Using glory "tough cop" Kuchin arranged developers meeting in expensive restaurants in Moscow, blackmailed, saying that will eventually lead them ulovnoe case if they refused to pay him. They naturally did not complain to the courts about unlawful acts, since it threatened to carry out searches with the participation of television and make anti-advertising development projects.

At the initiative of Kuchin in "Dissent" was produced about 10 economic checks and illegal searches. During searches confiscated all office equipment, which is then proto disappeared. Most likely, it was sold on the black market or appropriated. Detailed documentation is also confiscated without any explanation. All this led to delays in the schedule of works and the inability to perform the obligations under the contracts in time.

Konstantin Kuchin, occupying a high position in the main management of economic security and anti-corruption of the Interior Ministry, apparently did not shun any earnings. Later, he became interested in the company's land assets Kaluzhina and his partner.

In November 2015 Kuchin invited Kaluzhina GU MVD of Russia in the street Pavla Andreeva, where he met with a certain Michael, who introduced himself as the first deputy head of the Office of Economic Security and Anti-Corruption Directorate of the MOI of Russia and gave his phone number: 8 (926) 600-70- 05. Michael politely explained that the verification of "Subida" cease if Kaluzhin will work with Kuchin. He also pledged to that the developer will not have any problems with the business, if it will give them 50% of their land.

Kuchin required to issue 50% of the business share of the company "development", which was founded by his brother Oleg S. Kuchin. Negotiations on this subject lasted 4 months. Partner Kaluzhina Kishenko Alex was already on the verge of a nervous breakdown, as Kuchin had a strong impact on the psyche by means of threats and intimidation prospect of going to jail on charges of artificiality.

As a result, and Kaluzhin and Kishenko denied persistent Kuchin in share registration, because they understand that their company is just ruined. Threats from Kuchin only intensified obviously he pochuvstovat easy prey. At the last meeting, in March 2016 in a cafe "Grand Coffeemania", he again demanded a 50% share of the land, private car Kaluzhina "Porsche" and 15 million. Rubles. And again there were threats to start a criminal case and arrest the property.

Tired Kuchinsky domogany, Kaluzhin in March 2016 went to rest in Dubai, where he learned of the news on TV that he and his partner opened a criminal case. Kishenko Alex was detained for questioning without charge and placed in jail. Later in court, his lawyer said that Kishenko ready unsubscribe assets in exchange for freedom. Thereafter Kaluzhin decided not to return to Russia. Here, this living history of the practice of corruption in Russia, which is not finished yet, as corrupt is not punished. But the punishment will inevitably follow.