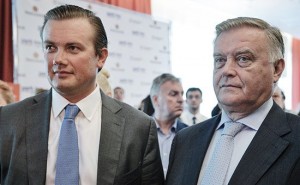 The arrest of the acting Head of MIA T GUEBiPK Dmitry Zakharchenko caused a panic among the former leaders of Russian Railways. A former head of the state-owned company, Vladimir Yakunin sharply departed from Russia "with a prolonged course of lectures and international meetings." However, in the West, he also will not be able to feel confident. According Rucriminal.com, for four years in Switzerland, is under investigation for "laundering" funds associated with the former top managers of Russian Railways.

Once in 2015 Yakunin was dismissed from his post as president of Russian Railways, he announced that he will continue to work within the framework of the World Public Forum "Dialogue of Civilizations". This forum was created Yakunin, when his family, especially son Andrew began to settle in England, and was a very comfortable thing. As soon as Russia becomes "hot" to Yakunin (there is a dangerous criminal case), he immediately turns to Europe "business forum". It is quieter, and the family has been living in England. Andrey Yakunin with his wife and children should soon get British citizenship and are actively selling off assets in Russia.

I was no exception and the case of the arrest of Dmitry Zakharchenko. According Rucriminal.com, at a time when in the apartment of relatives employee GUEBiPK seized $ 120 million, Vladimir Yakunin was already on the way from Russia for urgent cases. He had to give lectures in Europe and prepare everything to the 14th Rhodes Forum, which will take place from September 30 to October 2, on the Greek island of Rhodes. The organizer of the event - yakuninsky "Dialogue of Civilizations" and the online headline reads: "Chaos versatility: an urgent call for dialogue." "The agenda of this overarching theme, as civilization against the new barbarism", - stated in the materials of the "Dialogue of Civilizations". It is understood that the "owner" of the forum and one of the speakers is very Vladimir Yakunin. A theme of "chaos" so excites the minds of the Europeans that Yakunin as its chief expert, literally "tear apart". According to informed sources Rucriminal.com, after the forum the former head of Russian Railways will travel to Europe with the appropriate course of lectures. Therefore, his rapid return to Russia should not wait.

Why Yakunin could well scare story of the arrest of an employee of the Interior Ministry GUEBiPK? It's very simplicity Zakharchenko for many years carried out on the safety of law enforcement line Andrey Yakunin Krapivinu- adviser and custodian of the shadow box office the former head of Russian Railways.

Andrei Krapivin officially served as president of Russian Railways advisor (ie Yakunin) on banking issues and relations with the CIS countries. And the people knew him as "Yakunin purse." Through Krapivina solve many problems associated with large construction contracts Railways. Krapivin and Yakunin had known since the 90s, when Krapivin taxied fine "Mezhtransbankom" through which the son of the future patriarch of railways privatized at bargain prices hotel "Baltic" in St. Petersburg, earning on this as soon as 100 million dollars.

In 2005, they were seized with JSC "Transelektromontazh" (TEM, a subsidiary of Russian Railways), which provides electrification of the entire railway previously controlled environment of the former head Gennady Fadeev state monopoly. Krapivin and his old friends, "Safety" and Boris Usherovich Valery Markelov somehow achieved from the company's previous owners transfer their offshore companies and became co-owners TEM along with Russian Railways to give a considerable profit from the contracts. Later, the trio, and with them Yakunin Jr. quickly took control of all the rest of the key subsidiaries of Russian Railways, through which hundreds of billions of rubles in a row (this Railcar "Transmashholding" Carrier "Rusagrotrans" grain, international freight Freigh One, Project Office " Lengiprotrans "CHOP" Legion "," Infotech "and others). Son Alex Krapivin was also attached to the case, becoming apparently planted general exemption for compensation from the contractors, not directly controlled by the group.

According Rucriminal.com, all under the control of this close-knit team, there were about 200 firms that received funds from the Railways. We are talking about billions of dollars, most of which are settled in the black "box office". Part of the money is "laundered" and cash out in Russia. A portion went to the accounts of offshore companies in Switzerland. Only from 2007 to 2013 was derived from Russia $ 2.5 billion received under contracts with Russian Railways. April 20, 2015 Andrei Krapivin died, and his successor in the rank of "purse" Yakunin became Markelov.

It is clear that such raskhititelno-washout mechanism could not operate without reliable protection in the power block. One of the cover up and was Dmitry Zakharchenko. Moreover, with the tasks he mastered so well that soon became the junior partner, receive a share of shadow incomes. The share was so big that Zakharchenko literally "bathed" in the money. It is a matter of urgency, "he wrote" from Rostov-na-Donu his father Victor Dmitrievich, who began to issue one after another hugely expensive apartments (the total cost of pull at 1 billion rubles). And then former teacher Victor Dmitrievich Zakharchenko has had to become a man, who has been issued the right to manage the accounts of offshore companies in Swiss banks. (Rucriminal.com publishes scan passports Zakharchenko, Sr., who was attached to documents for the right to account management). In these accounts there were hundreds of millions of euros. However, it is not clear whether it was Dmitry Zakharchenko share or part of the money stolen from the Russian Railways, which then had to return to their partners.

So, Vladimir Yakunin, have every reason to feel uncomfortable after the arrest Zakharchenko. However, in Europe, the former head of Russian Railways can not feel completely safe. According Rucriminal.com, the summer of 2012 the Swiss prosecutor's office opened an investigation of money laundering, which may be associated with top managers of Russian Railways. At the time of initiation of the case by one of his defendants was considered Krapivin, died later. But who knows what the Swiss are "dug" for four years.

The amount of contracts 334 billion rubles

According to Reuters, Krapivin senior in 2007 he was a partner in the Herman Gorbuntsov Capital Merchant Bank, in which Russian Railways is located large deposits. In 2008, the Bank was not able to return the deposit Railways for $ 1 billion. Gorbuntsov opened a criminal case in Russia, but he had to go to London, where in a few years he was assassinated. Gorbuntsov gave Reuters the bank documents, which show that from 2007 to 2013 through the accounts of the ten companies with nominee directors and dummies were held $ 2.5 billion listed under contracts from the Railways.