How did Kerimov build a school for Shuvalov

Rucriminal.com continues a series of articles about the "owners" Rublyovka - people who own the... 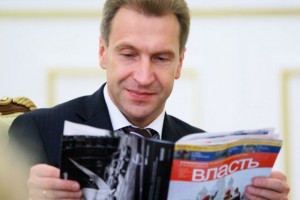 Rucriminal.com continues a series of articles about the "owners" Rublyovka - people who own the "golden" land in the Odintsovo district. And we are talking about those officials and businessmen who received dozens, and sometimes hundreds of hectares for pennies. This happened thanks to two heads of Odintsovo district - Alexander Gladyshev and, who succeeded him, Andrei Ivanov. In this publication, we continue to talk about the activities of Gladyshev, and then we turn to the fate of Ivanov. From this publication, readers will learn about how the "first persons" of the Orykhovo OPG (Klinovsky, Vyalkov, Belkin), have become notable latifundists. About how Gladyshev "in exchange" for the land went away from criminal cases. About his patrons Shuvalov, who forced the oligarch Kerimov to build a super school for the children of the vice-premier.

After in the early 90's Alexander Gladyshev got accustomed to the place of the head of the Odintsovo district, Timur Klinovsky actively sought contact with him. In the bases of the RUOP of Moscow, this person is listed as an active member of the "nut" criminal gang and an acquaintance of the leader of this organized crime group, Sergei Timofeev (Sylvester, blown up in 1994). As a result, a significant meeting was held, and after it, Gladyshev and Klinovsky became inseparable for many years. Initially, Klinovsky, at the first request of the head of the district, arranged for him luxurious banquets for hundreds of people. (Gladishev still loves such festivities). And soon, on the rights of a good acquaintance, Klinovsky began to apply to the official with requests. As a result, with the direct participation of the head of the district, Klinovsky was replaced by the most tidy lands of Rublyovka - the territories where the Gorki-2 agro-complex was located, the state farms Naro-Osanovsky, Moskvoretskoe and Makarovo, part of the lands of the Matveyevsky state farm, E. It was Gladishev who signed all the necessary regulations and land allotments.

When the most expensive lands were "stained", Gladyshev and Klinovsky came up with a kind of know-how: how to make money on firms that build cottage villages on Rublyovka. The head of the district knew perfectly well which fields and other plots of land in the future would be sold to commercial structures at market prices, and not for kopecks, as Klinovsky. As a result, Gladishev began to share such information with his friend "authoritative" businessman, and he began to buy everything as cheaply narrow, but long strips of land along the fields and near the Moscow River. If on the map of Odintsovo district to note all such territories, then it will literally be covered with red shreds. All these lands belong to the agricultural category, an annual tax on them was minimal, so they could belong to a man for decades, without seriously burdening it financially. However, for a while to understand why Klinovsky a lot of small land allotments were difficult to sell, it is almost impossible.

An explanation for this was found when those same fields were sold for cottage construction. And each erected settlement faced the same problem - the plots of land (the same segments and pieces) along which it is possible to lay the communications were surely in the possession of Klinovsky. Businessmen had to bow to him, and Klinovsky could ask for $ 1 million for his piece of land at ten meters (the one that is needed for building communications). He had to do nothing and had to pay.

With the same problem faced and structures that built villages near the Moscow River. To make a small passage to this river, it is necessary, at a fabulous price, to buy another "scrap" from Klinovskom.

Another know-how attributed to Klinovsky and Gladyshev is the introduction of forests into settlements. This allowed to start the construction of cottages in the territories of the forest fund (the land was officially leased). And then the owners of the constructed mansions bought out forest plots for 3% of their cadastral value (Russian legislation allows it to be done).

Klinovsky is by no means the only one among the "nuts" with whom Gladishev was closely associated in the 1990s. He also knew the leader of the Odintsovo grouping (the unit of the Orykhovo OPG), Dmitry Belkin (Belok), who recently received a life sentence for 22 murders. The structure of the Squirrel by Gladishev's decision not only became the owners of various land plots, but also received the Odintsovo food market. For many years he was recorded by his wife and mother Belka.

Since the 1990s, the head of the district has been friends with the former treasurer of the Walnut-Odintsovo OPG, Sergei Vyalkov. In addition to allotting him the same lots of land, in 1992 Gladishev helped Vyalkov in the implementation of a major project, carried out for money from the "obshchak" of the nut group - the construction of the shopping mall "Avtomoll." It is worth noting that Vyalkov, in contrast to many other representatives of the criminal world, was extremely grateful. He at the first request of Gladyshev arranged for that chic banquets in his night club "Stagecoach". Also, Vyalkov paid expensive foreign trips and the rest comes to the head of the district.

Another faithful associate of Gladishev in the 90s was co-owner of the once famous company "Microdyne" Gennady Voloshin. The latter had good connections in the Rosselkhozakademii, which, in turn, owned large tracts of land in the Odintsovo district. In one fine day for Voloshin, Gladyshev from the Rosselkhozakademiya received a document stating that the school refused to use its territories on Rublyovka as unnecessary. And the head of the district handed them over for a song to Voloshin. He already sold all these lands at market value, including to businessman Sergey Zuev, who among other things built a shopping complex "Three Whales" on the received sites. Then around this complex, which sold exclusively contraband furniture, a real war broke out between the Russian siloviki.

A part of other lands adjacent to the "Three Whales" went to the son-in-law of Gladyshev Yezhov. About this his relative the head of the district never forgot when allocating plots of land.

To the list of persons at different times close to Gladyshev, one can also refer to the tried lawyer Dmitry Yakubovsky. To serve his land interests, Gladyshev started a special employee in his office, named Pavel. As a result, with the light hand of the head of the district, General Dima received for a pittance of land, on which the cottage settlement Gorki-8 was later built.

Under the "wing" of Igor Shuvalov

It is clear that such a stormy and extremely questionable activity of Alexander Gladyshev, repeatedly attracted the attention of law enforcement agencies. In 2000 and 2004, the Moscow Regional Prosecutor's Office brought criminal cases to the head of the district under Article 286 of the Criminal Code (exceeding official authority). According to the investigators, in 1998 the head of Odintsovo district allocated Cotton Vei CJSC for individual housing construction of 75.98 hectares from the lands of the Sosny health complex owned by the presidential administration. Subsequently, this site was broken up and sold to private individuals. As part of the investigation, Gladishev was even suspended by the court for a while.

In 2009, the Central Internal Affairs Directorate of the Moscow Region brought two cases to Gladishev. The first, under Article 165 of the Criminal Code (deception), concerned damage to the budget. Gladishev signed an agreement on the implementation of an investment project for the construction of a multi-storey building in Gorki-10, and then in additional agreements reduced the developer's transfers to the district budget by $ 11.071 million.

The second investigation was connected with Gladishev's excess of his official powers (Article 286 of the Criminal Code of the Russian Federation). The head of the district without a tender carried out the lease of land for housing construction in the village of Trekhgorka to affiliated legal entities. Subsequently, these land plots were sold and registered in the ownership of one individual. According to the investigation, as a result, the district's budget was damaged by 230 million rubles.

In 2012, Gladishev was interrogated in connection with the investigation of the CSO of the IC of the RF for the Moscow Region, the circumstances of the very know-how invented by the district head and Klinovsky - the accession of forests to human settlements.

However, whenever Gladishev stepped out of responsibility. There are two explanations for this. First, Gladishev did not spare the plots on the prestigious Rublyovka for judges, prosecutors, heads of investigative bodies, high-ranking police officers, of course, he did not forget about his immediate bosses. At one time, the head of the district handed over 15 hectares of forest in Barvikha for the construction of cottages for almost all prominent representatives of the government of the Moscow region: Sablin, Panteleyev, Barkovsky, etc. And they all together helped the head of the district, when he found himself in a difficult situation.

The second explanation for the invulnerability of the district head is that he always had patrons among high-ranking federal officials. At one time Gladishev was taken under his care by Deputy Prime Minister Igor Shuvalov. The companies under his control, with Gladishev's supply, had at one time not only a few lands on Rublevka. Shuvalov was a regular participant of all events taking place in the area under the auspices of Gladyshev. The vice-premier built a huge residence on the site of the state farm "Zarechie". The same state farm, in which Gladyshev at the beginning of his career was the secretary of the party committee. A very funny story is connected with this residence. Next to her was an ordinary school. As if Shuvalov asked Gladyshev to give him this educational institution. The vice-premier said that he wants to build the best school in Russia, where he could give his children to study. It is clear that the head of the district could not refuse the patron. Sam Shuvalov spent money on such projects is not used. Therefore, with the money of the oligarch Suleiman Kerimov in Zarechye, a giant palace of knowledge was built with its own pool, ice rink, etc. Only here children of ordinary residents of the district in a similar palace "can not get through" - it was occupied by the scions of the owners of huge cottages.