Raiding in A1 format 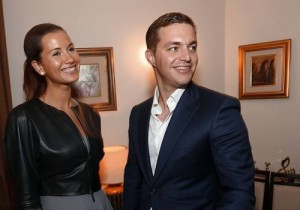 The daughter of the Minister of Foreign Affairs of Russia Sergey Lavrov has opposed the ban on studying abroad. Katya Vinokourov (by her husband) has publicly stated that the study abroad - this is a common practice adopted in the world and Russian youth should not abandon it. Characteristically, Kate was born and learned in New York, and then graduated from the prestigious Columbia University. According to her, in vain Duma deputies did not want to believe in the fact that Russian graduates of foreign universities and then return home. A living example - Katya herself and her husband, a top manager Alexander Vinokurov. Sergey Lavrov's daughter says that after working for a foreign company, the person can return to his homeland, having useful skills and working methods acquired abroad.

It is obvious that such "useful" skills and rigid principles brought to Russia Catherine's husband, Alexander Vinokourov, who graduated from the University of Cambridge. Since 2014 he is the President of "A1" - Investment units "Alfa Group". 34-year-old manager started his career as a senior specialist investment banking division at Morgan Stanley in London. Then he became general director of the Russian branch of TPG Capital - the world's largest private equity fund, which manages assets of $ 100 billion..

Obviously, in Europe Vinokourov learned something this special way that allowed him to make a career in the scandals of financial fraud and corporate raiding frank. Even in 2010, TPG Capital famous raider attack on the "Lenta" retail chain management. The company's office stormed by armed ChOPovtsami, using tear gas and smoke grenades. It was the first time Alexander Vinokourov showed skills "European" education. Although, according to the recollections of his friends, he was in his youth differed hooligan tendencies.

After studying at Cambridge, these tendencies have reached a new level, giving rise to a shameless love of raider attacks. Business acumen, obtained in the West, has turned into a professional raider Vinokourov. Although the basics of gang skills he learned back in the 90's to the guidance of his father - Semyon Vinokourov, who in those years, dashing suddenly transformed from a simple engineer a major dealer of drugs and participated in the public supply of medicines regions of Russia. This business Semen Vinokurov worked under the auspices of Shabtai Kalmanovich, who was killed in Moscow v2009 year. Later, his father - Vinokourov participated in the takeover of the company, "Liat-Natalie," which went "SIA International", the main owner of which is now a son - Alexander Vinokourov.

When in 2008 Vinokurov married the daughter of the Minister of Foreign Affairs of Russia Sergey Lavrov, he did not come into this family "poor cousin". But as a result of "dynastic" marriage Cambridge graduate has received a "roof" of which Russian businessman can not even dream of. Before that Vinokourov was just run, after his marriage to the daughter of the minister, he began "taking off." From 2011 to 2014, Alexander led a group of "Sum" Ziyavudin Magomedov. In December 2014 he was appointed president of the unit "Alfa", "A1" investment company.

It is characteristic that during the whole "investing" career Vinogradov activity was associated with major financial scandals and grab someone else's property. People surrounding the top manager is involved in dozens of criminal cases or hiding them abroad. It should be noted that the "Alfa Group" has always been famous for the love of raider attacks, due to which its founder, Mikhail Fridman has long left Russia, went to London and calls himself a "citizen of the world." As president unit "Alfa", investholding "A1", Alexander Vinogradov happily plunged into the atmosphere of cosmopolitan lawlessness, becoming a major raider with impenetrable "ministerial" roof.

At one time, the wolfish appetites of the young Sasha Vinokourov shocked even the founder of the "Amount" Ziyaudina Magomedov - 28-year-old Cambridge graduate demanded 2 million dollars just for the transition to the post of President of the "Amount", except that -. $ 2 million annual salary and. an annual bonus of up to 6 million. dollars. But later, Magomedov has not regretted that hired a guy with such connections - only operation to capture JSC "United Grain Company" (UGC) brought him about 15 billion rubles.. In early 2012, thanks to the active support of the Deputy Prime Minister Arkady Dvorkovich "Summa Capital" Magomedov gained control of the UGC, winning the tender by the owner "Basic Element" Oleg Deripaska.

At the end of 2012, "United Grain Company" - a state agent on grain interventions regulation, storage of the state grain fund and strategic stocks already showed losses of about 3 billion rubles.. According to estimates of financial investigations of the Centre under the Government of the Russian Federation since the transition state-owned companies under the control of the "sum" of the budget through a front company of the Swiss company «Soyuz Commodities S.A.», use the "Left" contracts were put in a total of 15 billion rubles. "United Grain Company" is an important agricultural market regulator, to smooth price fluctuations and to ensure maintenance of the state grain reserve.

After the major success of raider in favor of the "Amount", zamaterevshy invader Vinokourov moved to the "Alfa Group", which was engaged in the same, but on a much larger scale. He managed to establish good contact with the head of Sberbank German Gref, who appealed to the company "A1" with a proposal to "work" with "bad" debts and assets with stressful that most do not carry reputational risks. After that, the debtors Sberbank unanimously began to accuse Gref in the seizure of their assets: it is made publicly Vladimir Kehman (the JFC), Sergei Poymanov ( "Pavlovskgranit"), Andrew Gorodnov ( "Alteks group companies"). Gref, hiding behind the activities "A1", confidently declared that he was ready to go through with regard to ineffective owners, due to which the bank is losing.

It should be noted that in the capable "Cambridge" hands Sasha Vinokourov company "A1" has become a stout tool for knocking out debt in the best traditions of medieval English usury. It is known that working with bank debtors company requires a fee in the amount of 5-20% of the amount of the returned value of the loan or sold the property. Therefore, it is interested in projects that can bring her at least 10 million. Dollars. That is, the company is interested in working with the debts of 50 mln. US dollars. This assertion of Vinokourov. As stated by the co-owner of "Alpha groups", the head of the advisory council "A1" German Khan "was tasked to update the company before Vinokourov and cheer her inside. We wanted to infuse new blood into A1 and make it more aggressive entrepreneurial spirit. " Apparently, aggression failed.

The sense of impunity that allows you to "A1", which is covered with armor "roof" Vinokourov in-law, even "run down" to "Uralvagonzavod", which produces our famous tank "Armata". It was learned that the lawyers of the company "A1" opposing NPK "Uralvagonzavod" in a corporate conflict at the coal company "Nina", threatened the members of the Board of Directors and management UVZ criminal proceedings in Cyprus and personal sanctions, including a ban on entry to the EU.

Often, financial and commercial activities "A1" recalls dashing 90-s with a rough "spin" stalls. But now the scale is certainly more. The latest example, an attempt to push the company's founder "Eurodon" Vadim Vaneeva of its business. After the investment group "A1", bought 40% stake in the ground turkey producer in Russia - company "Eurodon", she immediately filed lawsuits against its owner Vadim Benaiah. Only three of the claim was filed: two defendant named OOO "Eurodon", in the third - person Vadim Van. The plaintiff in all cases is "Brimstone Investments Limited", which the beneficiary is A1. His interest in "Eurodon" sold her a member of "Gazprom" Board of Directors, former Minister of Property Relations of the Russian Federation Farid Gazizullin.

After that, the detective began quite dark and gloomy with the arrest of the investigators. Lefortovo court of Moscow arrested the former director of the Department of Natural Resources Vnesheconombank Ilgiz Valitova on suspicion of attempting to take possession of fraudulent assets of the group of companies "Eurodon". According to investigators, the proposed structure Valitov "Eurodon" get VEB loans in exchange for a share in their charter capitals. On the same day it became known that the company has sold structures A1 VEB 40% stake in "Eurodon" which gained less than a month before. At the same time, VEB bought from A1 share in 49% of the three group companies - OOO "Ursdon" (turkey egg production), Ltd. "Metal-Don" (metal) and LLC "Irdon" (house-building).

Blind clear that the arrest and Valitova transaction between A1 and VEB - related events have been Valitova "interest" in "Eurodon". A1 good money on the resale, at the same time pushing Benaiah from Eurodon management.

In addition to the corporate interests, Alexandre Vinokourov and faithfully watches over the interests of the family. He and his father, Semyon Vinokourov has long engaged in the pharmaceutical business. Together with Sergey Zhukovsky they own the company "Genfa", founded in 2006, which is engaged in distribution and localization of drugs. Therefore, when turned up the opportunity to seize the assets of a large company "SIA International", after the death of its owner Igor Rudinsky, Vinokourov made it without compunction. Relatives of the deceased appealed to him for help to understand the affairs of the company, and now they are only pitiful minority with the largest shareholder of Sasha Vinokourov. The heirs of the founder of the "SIA International" Rudinsky with difficulty retained only part of the business.

The aggressive policy of "A1" investment company practically designed to attract investments and competent embedding them in the development of the economy. Huge amounts of money in the amount of about $ 1 billion, which manages Alexandre Vinokourov -. It is a means of pressure on other companies, including the state, in order to seize the assets and financial flows. A financial instrument in the hands of raiders trained abroad legally used for the destruction of banking institutions and the Russian industry.