Chubais: “Bloodied corpses will be a picture for the election” 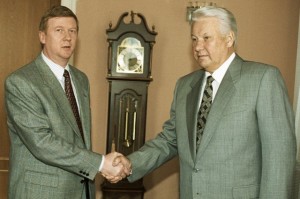 Rucriminal.info continues to acquaint the reader with the “wiretaps” from the archive of Boris Berezovsky. Today we will bring to your attention a very interesting conversation - Berezovsky and Anatoly Chubais. They are talking about Chechnya.

“I talked with Stepashin, he told me everything in detail. They went to this point in a compromise, because of this, the whole agreement came out. True, there is a second phrase that the final decision on the timing of elections is the competence of Chechnya itself. This means that elections will be after the withdrawal of troops. Then the strong pressure of Lobov and Zavgaev began. As a result, they in Rostov convinced the president to go to the parliamentary elections. Contrary to the agreement in Nazran. The president after doubts said, if you are sure that everything will be in order, then okay. As a result, Yandarbiyev stated that the basic points of the agreement in Nazran were violated. Based on this, we believe that our obligations under the agreement in Nazran and the Moscow agreement, signed in the presence of the president, have been exhausted. If the decisions are not canceled, then we proceed to force actions in order to defend our honor and independence. I assess the situation as monstrously risky. I appreciate the assurances of Lobov, as a direct lie. He is unable to control the situation. There are powerful Zavgaev interests. But in the end, they convinced B.N. (Yeltsin - Ed.). I began to break through to serious people. I talked with Stepashin. And he 100 percent confirmed my concerns. In Orenburg broke through to Viktor Stepanovich (Chernomyrdin-Red). He 100% confirmed my concerns. There is an ironic inevitability that bloodied corpses will go to us as a picture for the election, ”says Chubais in a wiretap published by Rucrriminal.info.

“I assess the situation in exactly the same way,” agrees Berezovsky.

“Did the president make any official statement on this matter?”, Berezovsky is interested.

“No, I didn’t. Fortunately, he stayed in a neutral position. He fixed it to Peter, where he said that the decision on the timing of the elections is the responsibility of the republic itself. Zavgaev convened the Supreme Council three times to force him to decide on the election. They did not want to, but under his pressure such a decision was made. And we were on the verge of transition to the combat stage, ”Anatoly Chubais fears.

“I fully share your position. I think that they are unacceptable. They are primitive Lobov and Zavgaev. One way out of the situation. Commentary itself, ”Berezovsky gives advice.

“I made the decision to make my way to him live or by phone and in sharp assessments set out our understanding of the situation,” Chubais supports the plan.

“If I can be of any help, I’m ready,” says Boris Berezovsky.

“Maybe talk with Tanya (Dyachenko - Ed.) ... Tanya is now in the Kremlin, we will redo the speech in Yekaterinburg. If she speaks with her .... ", Chubais asks.

“And you will talk too. She should bring it today, ”says Berezovsky in response.

“She tried at my request and ran into a very sharp reaction. He is concerned about this question, he is tormented by whether he did the right thing. And then she climbed in, and he abruptly besieged her. I ran into Ilyushin. He called Lobov, Zavgaev, Stepashin. Lobov says that he will control everything. But these are fairy tales, game. Then they told him that under your responsibility, then we’ll remove your head with you. I will be an attacker, ”summarizes Chubais.