The largest transit channel led to the ex-owners of Binbank 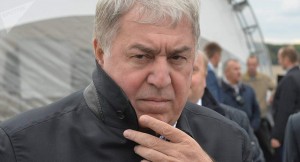 The arrest of the largest underground banker Ivan Myazin can hurt Mikhail Gutseriev and his nephew Mikail Shishkhanov, who owned Binbank, extremely painfully. Testimony on Ivan was given by the former chairman of the board of Promsberbank Boris Fomin, who for many years had been one of the key top managers of the Myazin team. The same Fomin said that he knew about how the notorious "transit" criminal network "Landromat" worked and who was its clients. According to rucriminal.info, the main one was Boris Binbank and now his former masters Gutseriev and Shishkhanov.

According to Boris Fomin, there was originally a single large group of shadow bankers, among them Eugene Dvoskin, Ivan Myazin, Igor Sitnikov (his mother Galina once ran the 2 department of the Moscow State Technical University Central Bank), Alexei Kulikov and Andrei Rozov. (The last character and his relationship with the former adviser of the Central Bank of Russia Sergey Dontsov deserve a separate story, which rucriminal.info will publish in the near future). Then the members of this group split, in particular Dvoskin and Rozov took a great interest in various Crimean projects. However, completely from Meazin and Co. they did not separate. As for Ivan and Sitnikov, they were at the source of the creation of Landromat, the largest money laundering channel in the history of the CIS, registered by law enforcement agencies of Moldova, Russia and the Baltic countries. However, the "Landmoth" he was nicknamed by journalists. Myazin and his partners themselves called this channel Meat. Presumably, this is a reduction from Myazin and Sitnikov. The services of this channel, through which more than $ 22 billion were withdrawn from Russia, were used by several structures. The main one, according to rucriminal.info, Fomin calls Binbank. Moreover, he withdrew from the Russian Federation not so much the money of third-party clients, as much as the funds of its owners, primarily Gutseriev.

One of the witnesses tells interesting details. Myazin always carried a leather folder, in which there were 10 mobile phones in special cells - each tube for communication with a separate client. As if Ivan got something wrong and on one of the tubes passed the information, intended not for the subscriber, but for another client. After that, he attached stickers to each cell with the customer's designation, for communication with which this phone is intended. A pipe, marked as Binbank, constantly cracked. According to the witness, among other things on transit operations for the owners of Binbank Myazin communicated with a certain Zhukov.

Fomin, who was close to Meazin, expressed his readiness to lay out everything that he knows about Ivan's cooperation with the owners of Binbank, and how Gutseriev and Shishkhanov "pumped" billions of dollars from the country. While his testimony was not given, it could happen in the near future. For example, while Fomin, during interrogation, told everything he knows about Myazin and the latter was arrested more than half a year ago.

Landromat operated for four years and allowed shadow businessmen using the same scheme to launder money on a huge scale, which even exceeds the GDP of many countries in the world. In this scheme involved: dozens of Russian banks, as well as banks of Moldova and Latvia; Moldovan judges and bailiffs; poor nominal directors from Ukrainian villages; and the same nominal managers from the Caribbean islands. These operations were carried out on the territory of several countries, but Russia can be considered the only victim, since the money withdrawn to the shadow financial sector was of Russian origin, and no taxes were paid from them, and it is believed that most of them are unlikely to ever return . In total, over a few years, about $ 22 billion has been withdrawn from Russia through Landandmat.

According to the research, the scheme worked as follows: two foreign dummy companies secretly controlled by Russian money launderers conclude a fictitious loan agreement (in reality no money is transferred to the borrower). The guarantors for the debt are a Russian company and necessarily a Moldovan citizen. One of the parties to the contract can not pay the debt, and the "creditor" sets out the requirements for the guarantor. Since a Moldovan citizen is present in the transaction, the case is transferred to the Moldovan court, where a corrupt judge issues an official order obliging the Russian company to pay off the debt. The court appoints a bailiff, who is also part of the fraudulent scheme, and he opens an account with Moldindconbank, where the Russian company transfers money, paying off the non-existent debt.