Sovcombank: deposit for an hour 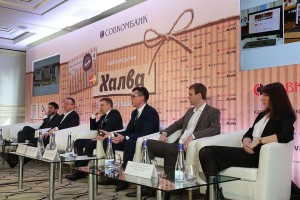 rucriminal.info returns to the story of one of the biggest scams in the banking market. “Sovkombank”, bypassing the instructions of the Central Bank of the Russian Federation, accepted deposits from VIP-clients for billions of dollars, and then refused to pay them. The total debt to privileged investors exceeds 6 billion rubles. Huge sums were accepted by the shareholder and deputy chairman Sergey Peretrukhin and gave out debt receipts as a private person. However, the receipts indicated that the funds are accepted “for investments in shares and deposits of Sovcombank.

In previous articles, we talked about VIP investors Ilya Bychkov, who made unofficial deposits at Sovcombank for 1.2 billion rubles and 702 million rubles, and Marina Shatskaya, who made deposits for 1.2 billion rubles. Both businessmen have not received their money back and have already won all the courts in Peretrukhin. In this publication we will discuss another privileged investor - businesswoman Svetlana Golubeva.

According to the documents that are available to rucriminal.info, Golubeva is one of the oldest VIP-depositors and has been cooperating with the bank since 2011. Moreover, this cooperation on the part of Sovcombank is very strange. So, on May 26, 2011, Golubeva opened a deposit in the Moscow branch of PJSC Sovcombank in the amount of 1 million euros and deposited the corresponding amount. According to court records, on the same day, May 26, 2011, literally in a few hours, the entire amount was withdrawn. Golubeva did not notice such manipulations, since Peretrukhin personally (namely, he worked with similar VIP-clients at Sovcombank) transferred large interest to the necessary accounts, and sometimes paid them in cash. Therefore, we can assume that if you regularly receive interest on a deposit in Sovcombank, this does not mean that your money is in place. At least Golubeva lost her savings.

In 2015, the Central Bank of the Russian Federation began a “war” with banks of vacuum cleaners that pump money from the public at high interest rates and allow them to go to the needs of the owners of credit institutions. “Sovcombank” is a typical “vacuum cleaner” and, after tightening the policy of the Central Bank of the Russian Federation, it could no longer officially and even semiofficially give huge interest on deposits. As a result, Peretrukhin announced to VIP investors that they are switching to a new form of contractual relations with them. He, as a shareholder and top manager of the bank, will issue promissory notes in which it will be noted that the money goes to be placed as deposits with Sovcombank. And, as a shareholder of the bank, will guarantee high interest on deposits.

Most of the VIP-contributors, including Golubev, agreed. According to rucriminal.info documents, on September 1, 2015, Golubeva issued a receipt to Peretrukhin for that same 1 million euro, which spent less than a day on Sovcombank’s accounts. She was promised 10% per annum. September 1, 2016 Golubeva made another contribution of 10 million rubles at 20% per annum. Further, the fate of all other privileged depositors was waiting for it, collaborating on the receipt system, invented by Sovcombank shareholders. In 2017, Golubeva stopped paying interest on deposits. And when the businesswoman demanded money back, she was not returned anything.

The businesswoman had to sue not with Sovkombank itself, but with Peretrukhin, since it was he who issued the receipts. The woman won the hearing in the Savelovsky court, and then in the arbitration court she got into a long line of creditors Peretrukhin (and in reality Sovcombank), which was declared bankrupt.

How Sovcombank itself behaved in this situation, rucriminal.info will tell in the next publication.

According to the information of our sources, the VIP-investors funds were used for the needs of Sovcombank shareholders, who have different types of business. Also, the money went to buy for them real estate around the world and other entertainment. rucriminal.info has already said that the bank’s shareholders, including Dmitry Gusev, Chairman of the Board, are avid poker players and sometimes make bets on huge sums.