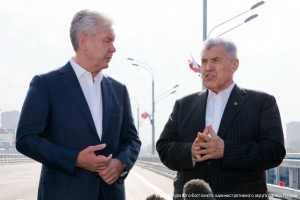 rucriminal.info continues to explore the inner circle of Moscow mayor Sergei Sobyanin. Earlier edition in detail told about the Deputy mayor Natalya Sergunina who is responsible for economy and management of city property. Our investigation showed that, formally, the former spouse Sergunina, a native of Chechnya Movladi Natsaev in bases GU MVD of the Russian Federation in Moscow in the early 2000s was listed as a criminal contingent. And their antics fully confirms similar coloring, assigned him operatives. And now he is a person close to the head of Chechnya Ramzan Kadyrov. This publication will focus on the adviser Sobyanin Vladimir Zotov. If Sergunina, we can say "young" in the team of the mayor, the Zotov, the member of the "Council of elders".

If you look at the official biography of Vladimir Zotov, then from it you can find out that he has a wife with whom he has been married for more than 30 years, and an adult son Boris. On the personal website of the old resident of the Moscow government (Vladimir Borisovich was prefect of the South Caucasus region for more than 20 years) posted numerous photos from the family archive, which Vladimir Borisovich with his 70-year-old wife Valentina. They lead a simple lifestyle, like ordinary hard workers. Rest mainly in the homeland of the prefect-in the notorious village Kushchevskaya Krasnodar region or in the suburbs. On the photo gallery from the wedding of 30-year-old Boris everything is very modest: a small table, a simple room, 8-10 guests, no overseas dishes. At the head of a table together with the groom his parents – Vladimir and Valentina. Together with his faithful fighting girlfriend, the prefect is present at all anniversaries, official events.

However, in fact it turns out that the prefect has long lived with a young lover Zoe. Some sources rucriminal.info it is said that the prefect met the girl back in 2005, when she was 23 years old. According to other interlocutors, their fate brought them together in 2001, when the girl was only 20 years old. Anyway, the young Charmer charmed the elderly official, the novel began, and in 2007 Zoya gave the beloved twins – Ilya and Daria. You can imagine how much joy the prefect had. After all, he also has a twin: his brother one to one similar to Vladimir Borisovich. By that time, Zotov already divorced with Valentina and was the lawful spouse of the young narrowed. However, on all Protocol actions the official still goes with the old wife. Well, to not think anything bad.

It is clear that such a" diamond " as Zoe, requires an appropriate cut. Soon after meeting with the prefect, a girl moved in an apartment on Stroynowski street, located near the metro station "Taganskaya". In the city it began to move but a brand new expensive car, a series of which the owners called "gold"- H177HO177. Soon after the birth of Ilya and Daria, Zotov gave his beloved a chic gift - a more expensive car. This car set no less beautiful room - O999AX199.                        According rucriminal.info the girl is a way of life, characteristic of the young beloved of the oligarchs.  Gradually settles rustic Lodge officer in the suburbs, but mostly prefers is outside of the capital. For months she may be in another family home located in Sochi. Just Zoe once or twice a month is selected with the children outside our country. Favorite places in descending order: Switzerland, France, Austria, Italy, Germany, UAE, Turkey. If the trip is not for a long time, then Zoya is accompanied by her husband Vladimir Zotov. However, the most chic gift Zoe made ... Sergei Polonsky. Back in the days when Zotov was a prefect, and Polonsky construction magnate, whose sites were on the territory of the SE, his company "wrote" Zoe huge apartment in a chic and prestigious new building.

The fact that the prefect has a young wife is nothing shameful. Many officials, having entered old age, prefer to get young girlfriends. However, if their content requires actions that can attract the attention of law enforcement agencies, it is seriously alarming. And besides, as corruption is difficult to explain why Polonsky in his has decided to give Zoya Vitalevna expensive apartment. Or maybe she decided to allocate land for the construction of the complex? Or she created structures Polonsky the most favorable conditions in the SEAD?

And besides corruption is difficult to explain why Polonsky has decided to give Zoya V. Zotova expensive apartment. Parameters of the contract-139 meters in the elite residential complex " Dubrovskaya Sloboda "(old name – "Wellhouse on Dubrovka") for $451 750, that is – $3250 per square meter.