As a Senator "swept" the murder of Frala Shebzukhova 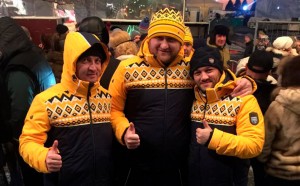 Rucriminal.info continues to publish testimony albert Chukova-former personal bodyguard of Rauf Arashukova. After the guard learned that his boss "ordered" Fral Shebzukhov and" order " was executed, he decided to leave Rauf. And even thought about how to tell about all law enforcement officers. However, it has already begun the hunt detectives themselves. At this point Arashukov have not found support in the face of the employee of the Ministry of internal Affairs KCHR Betuganov Timur, who was involved in the operational support for the murder of Shebzukhova. Learning that the operative looking for Chukov, Rauf scared and ran away from the KCR. Then, having agreed with Betuganov that he would be taken out of the case, the future Senator decided to hide Chukov in his apartment in the UAE. But in the end its just "cheated" and sent to jail.

According to the testimony of albert Chukov, a week after the massacre of Shebzukhov, the bodyguard noticed that he was being followed by operatives. The guard called Arashukov and said that they are interested in connection with the murder of Shebzukhov. Rauf was terrified, together with Ruslan Agaevym boarded a plane and flew from KCR in Moscow. Chukov and he almost got trapped operatives. He was invited to meet the girl. Just the day before, albert sold his white VAZ 2107, which he was driving when he was being watched by operatives. Arriving for a meeting with the girl and becoming to approach her, stopped too close to the white VAZ 2107. Immediately ran up to him detectives and detained the driver. Chukov understood that in reality the ambush was arranged on it and left to Baku, and from there to Ukraine.

According to the testimony of Chukov, which is available Rucriminal.info, from Ukraine, he contacted Rauf Arashukov and agreed to meet in Yalta. There the future Senator arrived with his son-in-law Ruslan Agoev. Chukov began to ask for help. "Arashukov said that he has an apartment in Dubai UAE, where I can live, and I can fly there and stay there until the problems about the murder of Shebzukhov are solved. After that, Arashukov gave me pocket money in the amount of $ 2000, explaining that as soon as I arrive in Dubai, I have to call him and he will tell the address where his apartment is, " - said in the testimony, which publishes Rucriminal.info ahhh! The next day Chukov flew to Kiev and from there to Dubai.

It should be noted that Arashukov all this time did not sit idly by, and negotiated with Betuganov. Rumor has it that the final fee was 10 million rubles. For the money, all traces of the murder investigation. Shebzukhova took an entirely different from Rauf direction. It was from this time Betuganov became a close friend of Arashukov and actually the head of his security service. And Chukov became an unnecessary burden, which also knows too much.

Sending albert to his apartment in the UAE, in reality, Rauf prepared for him a very different fate. The former bodyguard who thought over to give evidences on the chief, decided to isolate. By efforts of betuganov on It fabricated business in illegal storage of the weapon.

However, Chukov himself did not know about it. From Dubai, he began to call Arashukova, but he first did not come to the phone, and then completely turned it off. After living a few days at the airport in Dubai, Chukov flew to Kiev, where he was waiting for the operatives in the case of illegal storage of weapons. Albert was sentenced to three years. Thus unnecessary witness was taken out of the game.

Read the latest news on the" Arashukov case", as well as on who else the security forces are interested in, on our Telegram channel.