Why Boris Usherovich asks for political asylum in England

He brought to this country 2 billion dollars 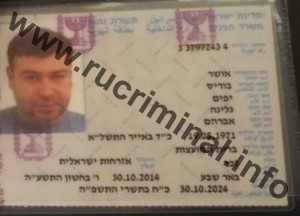 Rucriminal.info he continues to talk about the co-owners of GC "1520", which receives from Russian Railways contracts for hundreds of billions of rubles. We are talking about Boris Usherovich, Valery Markelov and Alexei Krapivin. The first is on the international wanted list, the second is in custody. They are accused of bribery for General support to the ex-employee Guebipk of the MIA of the Russian Federation Dmitry Zakharchenko. Also in the criminal case there are materials about the theft of funds received from Russian Railways, more than 300 billion rubles.

As soon as the TFR and the FSB took in the development of co-owners "1520", Boris Usherovich fled from Russia first to Cyprus, and then – to Israel. He has a long-term Israeli visa (until 2024), but it will not save from possible extradition. The more Osherovich declared in the international search, soon the hunt will start Interpol. And then Boris thought about the safe Bastion of all the fugitives – about England. In London without any warranties Osherovich afraid to go, so briefly landed in the UK's overseas territories – Gibraltar. There he filed a petition for political asylum, calling himself a victim of the Russian security forces. According to Rucriminal.info, Usherovich during the survey said that he was subjected to extortion not only by Zakharchenko, but also by a number of FSB employees. (In reality it is the FSB of the Russian Federation and carries out operative support on the "case of wise). In return for political asylum, he promises the British authorities to give details of their relationship with the security forces, as well as to reveal many other secrets. After the interview, Usherovich again left for Israel. He wants to wait for guarantees that he won't be detained in London.

It is worth noting that Boris is very shy about his relationship with the British authorities and the revelations he made. After information about his application for political asylum got in the media, he shot a video, which shows that Usherovich is in Israel. He's just afraid he might not make it to England. Before his arrest and extradite Russia. Indeed, he is still in Israel. However, Boris has already prepared everything for his arrival in London.

Co-owners of "1520" kidnapped and withdrew from Russia huge sums. By information Rucriminal.info, Usherovich and his business partner Dmitry Motorin (also gave bribes to Zakharchenko, laundered stolen money from Russian Railways) created a Fund in London, which is managed personally by Usherovich (while remotely). The Fund manages the amount of $ 2 billion (funds withdrawn from Russia) and actively invests in commercial real estate in the UK. Mainly – in office buildings.

Do not forget Osherovich about myself. In London, he bought a mansion on Mayfair (a prestigious area in Central London, East of Hyde Park), as well as an apartment nearby, with an area of 500 square meters. It remains only to wait for the receipt of guarantees from England and you can immediately move to London.

In the last publication Rucriminal.info told about the criminal record of Usherovich. In 1988, he was convicted Perovsky court of Moscow for several thefts from apartments. Since Boris was then a minor, he got off probation. His accomplice in the theft was Vitaly Makarevich. Friendship with the young thieves have been preserved and they have become the major plunderers. We found out that Makarevich is a founder of OOO "Setscrollinfo" and LLC "party", which Osherovich received from Russian Railways and its daughter companies contracts for a total amount of 15 billion rubles.