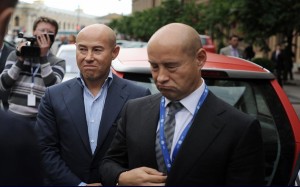 As predicted rucriminal.info "Bank Saint Petersburg" and the structure of Mikhail and Boris Zingarevich - JSC "orange-development" and OOO "Plaza Lotus group" has not found common language and have not entered into a settlement agreement. Now hearings in the Arbitration court are already in the stage of recovery of 400 million rubles.  However, as it turned out, this is only a small part of the trouble Zingarevich. At the same time, as if on command, personally to Boris Zingarevich filed claims for large sums of "MTS-Bank", "Globex Bank" and Bank "Otkrytie". Representatives of the once richest man in Russia talk about the "difficult financial situation." But this, of course, they "chase the tear" from the judges. A significant part of the loan funds that banks are now trying to recover have been withdrawn to BVI. And the ultimate beneficiary of one of the offshore companies is personally Boris Zingarevich.

Brothers Mikhail and Boris Zingarevich are known not only as "kings" of the pulp and paper industry, but also as one of the first employers of Dmitry Medvedev. It was in their Corporation "Ilim pulp" that the current Prime Minister from 1993 to 1998 worked as Director of legal Affairs. And in 1998 he became a representative of "Ilim" in the Board of Directors of JSC "Bratsk timber industry". Recently, people who are usually associated with Medvedev, things are not the best way. Zingarevich was no exception.

Bank "Saint Petersburg" demanded through the arbitration court from the family structures payment of debt under the loan agreement in the amount of 400 million rubles and interest in the amount of 280 million rubles. And this is only a "small part" of what the Zingarevichs have borrowed from the "Bank of St. Petersburg" and return, according to sources rucriminal.info not going to. The Zingarevich, as usual, used the administrative resource, several months of hearings were postponed, as they hoped that the Bank will go with them to the world. But at the last meeting it became clear that there would be no world war. Zingarevich again began to ask for a delay, assuring partial repayment of the debt. The judge demanded at the next meeting to provide supporting documents.

Moreover, Zingarevich will have to fight with creditors on several "fronts". According to Rucriminal.info simultaneously in Moscow the civil courts claims directly to Boris Zingarevich served at once three banks - "MTS-Bank", "Globex Bank" and the Bank "Opening". All they require from him large sums. A particularly comical story arose at the hearings on the claim of Globex Bank. The representative of Boris Zingarevich asked to transfer the case to the Northern capital, referring to the fact that she has a "difficult financial situation" and it is very expensive for her to travel from St. Petersburg, where she lives, to Moscow.  Judges, based on quite other grounds, made the decision on the transfer of the claim for consideration of the Petrogradsky district court of St. Petersburg.

And the troubles of the family ends. At the end of 2018, the family managed to resolve the issue with the compliant Investigative Department of the interior Ministry on the closure of the case against the son of Boris Zingarevich Anton. However, the Prosecutor General's office cancelled this decision and the other day investigation was resumed.  Anton Zingarevich was the owner of GC energostroyinvest-holding (ESIH) and is accused of stealing 2.5 billion rubles., received by the company in the Bank "Globex" and MTS-Bank, which were not returned. Anton Zingarevich was put on the international wanted list in 2017. Now threads of the resumed investigation can lead directly to Boris Zingarevich.

In the framework of the investigation, it was determined that the loans were abducted with the help of the loans to firms registered in the British virgin Islands (BVI). The main accumulating structure of the family business in the British virgin Islands - Global Trans Holding Copr-, as found Rucriminal.info, the ultimate beneficiary is Boris Zingarevich. This is evidenced by the Mossack Fonseca database, which became the property of investigative journalists from OCCRP. Therefore, the case in which the main accused Anton, can easily lead to his father.