"Mostotrest" frisked for theft during the reconstruction of the "Vnukovo» 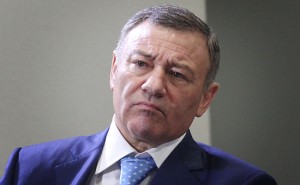 Имя : Arkady
Фамилия : Rothenberg
Отчество : Romanovich
Должность : Chairman of the Board of Directors of OOO Stroygazmontazh

Rucriminal.info tells what kind of trouble with law enforcement there are now the company "Mostotrest" Arkady Rotenberg. It was searched and seized in at least two criminal cases of embezzlement of budgetary funds. And now it became known that the majority stake in Mostotrest allegedly wants to buy VEB. However, more this deal looks like a fiction. As well as VEB's announced plans to buy GC "1520"- one of the main contractors of Russian Railways. In reality, and "1520" in the fall of 2018 in fact controlled by Rotenberg.

According to Rucriminal.info the Moscow interregional investigative management on transport is now the case of large-scale embezzlement during the reconstruction of the airport "Vnukovo". The main persons involved in the investigation, on the one hand, are all sorts of officials who took the work on the amount of which they were not worth close. But on the other hand, top managers of OOO "Transstroymechanizatsiya" and PJSC "Mostotrest".

OOO "Transstroymechanizatsiya"- "daughter" "Mostotresta", which carries out construction and reconstruction of transport infrastructure, such as roads, airports and seaports.

In 2011, OOO "Transstroymechanizatsiya" has concluded the state contract for the reconstruction and development of the airfield, landing, navigation and air traffic control of the airport Vnukovo in Moscow. The state customer for the object was FSUE "Administration of civil airports (airfields)". The contract cost was 7,451 billion rubles.

Investigators felt that the reconstruction of objects "Vnukovo" used cheaper materials than indicated in the invoices, and the objects themselves turned out worse, and therefore cheaper than the declared characteristics.  According to Rucriminal.info, in the summer and autumn of 2018 in the framework of this case, investigators and operatives went to the "Transstroymehanization" and "Mostrotrest" with searches and recesses constantly.

At the same time, these offices were cleaned and employees of the interior Ministry in Moscow. However, in another case – the theft of budget funds allocated by the government of Moscow LLC "Firm Tristan", which was engaged in the export of construction waste from the capital. As suspected operatives, in reality, "the Firm Tristan" was controlled by "Mostotresta".

"Carried out quickly-search actions it is established that the office of the PJSC "Mostotrest", are originals by the co Firma "Tristan", namely contracts for the placement of soils (additional agreements to the contracts), contracts with "Firm Tristan" for the provision of transport services, as-built documentation for the execution of these treaties, namely: invoices, accounts-invoices, invoices, waybills, acts of acceptance, letters of attorney, documents, electronic correspondence, postal and email addresses, and also telephone numbers on which contacts with representatives of LLC Firm Tristan were carried out, permissions of Department of construction of Moscow on transportation of soil on objects...., waybills, purchase books, sales books, trial balance sheets....for the period from 01.01.2014 to the present time, as well as other documents that are relevant to the criminal case," - said in the case file, which is available Rucriminal.info ahhh! On this basis, permission was obtained to search Mostotrest.

According to investigators, unidentified persons created an organized group that had the intent to steal budget money that the city authorities allocated "Firm Tristan" to perform works on transportation and placement of soil and debris.

If we add the total damage in two cases, the figure exceeded 1 billion rubles.

First, in "Mostotresta" decided that the visits of the investigators, "some" Department of transport and the Department of the interior in Moscow, happen by mistake. They say, they know not what they searched "themselves Rotenberg".

However, the two departments made it clear that they know very well who they come to with the activities and it received the good "from above".

After that, according to Rucriminal.info one of zamgendirektora "Mostotresta" urgently left the country. Planting was expected to begin in 2019.

However, they have not yet occurred. Moreover, the other day it was announced that the state Corporation "VEB.The Russian Federation may acquire a blocking stake in Mostotrest by Arkady Rotenberg, as well as a share in the 1520 group of companies by Alexei Krapivin (28.33%) and its partners. According to "Vedomosti", in each of the companies on the web.Russia could buy back 30% to 49%, which will allow the Corporation to the largest share in the group of companies "1520", "Mostotrest" or it will become the second largest or even the largest shareholder (package in 94.2% "Mostotrest" belongs to "TFK-Finans" which on 100% owns owned by Rotenberg, OOO "Stroyproektkholding").

However, the sources of Rucriminal.info in the market believe that this whole "deal" with "Mostotresta" is needed for two reasons. First, the Rotenberg periodically formally withdraw "Mostrotrest" from its possession, but after a couple of years, return the company itself. Given that "Mostotrest" erected Crimean bridge is a forced operation. Secondly, through a deal with VEB, a huge amount of state money can be "pumped" into other Rotenberg structures.

Even more "fun" situation with the deal with "1520", but we'll talk about it another time.