Thieves in law" from the Year Nisanov

The case of the raiders confirmed the relationship billionaire mafia 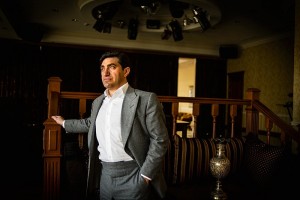 To correspondent Rucriminal.info the reaction of billionaire Nisanov to the scandal after the appeal of businessman Ilgar Hajiyev to Vladimir Putin became known. In it, the entrepreneur claims that his construction business in Russia was captured by persons behind whom there is a billionaire Year nisanov. At the billionaire his participation in raiding deny. "The information that the Year of nisanov is somehow involved in the situation described by you is a lie," radio Liberty said in the press service of Kievskaya square, the company of the Year of Nisanov. However, in a narrow circle the billionaire is more talkative. Our source, so described nisanov's reaction to the events: "I gave money for the project, and me tried "to throw". People got what they deserved." For his reputation, the billionaire is not perejivayu It and so he is not the best. The main thing is to preserve the reputation of a person who can "eliminate" any representative of the Azerbaijani Diaspora. Moreover, "eliminate" sometimes acquires a direct meaning.

In an interview with Radio Liberty Ilgar Hajiyev said that during the conflict with the Year by Niconovum threatened him "thieves in law", and not udivitelno. Rucriminal.info talked about Nisanov close ties with the mafia. In particular, our sources spoke about the possible connection of the billionaire with the Azerbaijani "thief in law" Nadir Salifov (Lotto Guli). In particular, they had a common enemy - "thief in law" Rovshan janiev (Rovshan Lankaran).

When the Year nisanov and Zakhar Iliev opened agro cluster "Food city", their main task was to lure traders and wholesalers to this site.  They preferred to work in the markets controlled by the Azerbaijani mafia, including the "thief in law" Rovshan janiev (Rovshan Lankaran). The main concentration of wholesalers was the market "Four seasons", controlled by brothers Ananiev and Timothy Kurgin. And all merchants-Azerbaijanis who worked on it, obeyed Rovshan. While there was such a situation, "Food city" should not count on large profits.

After long negotiations Nisanov and Iliev managed to find a common language (primarily the financial component of the issue) with Janiev. In addition, he had disagreements with Ananiev and Kurgin. As a result, Rovshan gave the go-ahead for the mass relocation of traders and wholesalers from "Four seasons" to "Food city".

In the pockets of Nisanov and Iliev flowed huge profits. But then, as sources believe Rucriminal.info, between Nisanov, Iliev and "thief in law" there was a conflict. By this time Sara has reconciled with Kurgin. Therefore, threatened Nisanov and Iliev that will surpass all wholesalers and dealers back on "Four seasons". The conflict arose just at the time when the main enemy of Rovshan - Nadir salifov-began to prepare for liberation. Moreover, he expressed to gotovnosti work with merchants with "Food city" to a more loyal conditions than dzhaniyev.

As a result, Rovshan was shot dead in Istanbul.

If you go back to the history of Gadzhievym, according to the businessman in 2017 his company SDI Group has launched the construction of the club house and commercial space "Warnaco" with total area of 48 thousand sq. m. Hajiyev will claim that he is the investor of the construction. In turn, surrounded by Nisanov assure that money for the project was allocated by the billionaire.  In 2018, the company opened a sales office and sold 40 out of 300 apartments in a month. According to the Bell, the business plan of the complex was to bring $200 million. The partners agreed to divide the profit as follows: Hajiyev claimed 70% of residential and 50% of commercial areas, his partner — 30% of residential and 50% of commercial.

But at the stage of the pit Hajiyev decided to sell his share of commercial space, leaving only residential meters. He does not name a potential buyer. "Suddenly for me Nisanov representatives stated that the commercial areas are not sold. Since this is their profile, apparently, they wanted to manage these areas on their own. Then I offered to buy out all my share in the project for about 3 billion rubles," the businessman says.

Negotiations came to a standstill, omits details Hajiyev: according to him, he was simply offered to transfer the whole project to partners.

The businessman describes further events in his statement:

"Since January 2019, unknown third parties, under the leadership of Nisanov Year Semenovich, a number of actions have been taken, as a result of which I was removed from the management of my construction companies. This was reflected in the fact that under threats of physical violence against me and my loved ones, I was forced to leave the Russian Federation, because I took these threats really.

Thus, my business was subjected to raider attacks, which was followed by an attack on one of my construction sites, namely LCD "Varnado". So, 21.01.2009 as a result of attack on this system-a platform, construction works were completely frozen, and builders forcibly forced to leave workplaces. All this served as the basis for the formation of accounts payable and the inability to fulfill its obligations to suppliers and subcontractors.

After that, on January 25, 2019 there was another attack on the head office of my company, for which criminal liability is provided for under several articles of the Criminal code of the Russian Federation.

So, at the end of the working day, about 20 unknown and aggressive armed persons broke into the office of the company which is located at the address: Moscow, Kutuzovsky Avenue, 3. They blocked possibility of an exit from office and forbade all to use means of mobile communication, and also audio and video recording devices. They barbaric way dismantled the video surveillance system in the office and in the surrounding area. These persons took the premises and demanded that all implicitly obey instructions - Teplinskaya Flury of Dardanelov, which is representative of Nisanov Year History.

The fact of illegal possession of property belonging to my company is confirmed by audio and video recordings, which I attach to this appeal.

The next day, the office came cousin Nisanov Year Semenovich – Yusupov Vladislav Ilukevich, recently gathered top managers of the company and announced to everyone that from now on, he is the new owner of the company and that all employees must follow his orders and instructions Teplinskaya Flury of Dardanelov. Also, he demanded to give him all flash drives and electronic Bank keys.

Subsequently, in view of the unlawful interference of third parties, including Teplinskaya Flury of Dardanelov in internal economic activity of my construction companies, was paralyzed construction works at all construction sites, including the construction of kindergartens, clinics, designed for all citizens living in the above residential complexes. Was blocked to made the payment to the contractors and to make payment of taxes, payment of wages to employees, to suppliers for the materials, to contractors for work performed.

I have repeatedly made attempts to use all legal ways to resolve the current conflict situation peacefully, despite the enormous financial losses incurred, because I really fear for my safety and the safety of my loved ones.

However, it is not possible to find a compromise, because of illegal demands from Nisanov And other persons.

At the same time, during my absence, in the city of Moscow, 24.04.2009, repeated raider capture of head office, under the following circumstances was made:

In the office of LLC "SDI GROUP", located at the address: Moscow, Kutuzovsky prospect, d. 3, burst armed men. These persons blocked the entrance to the office and did not allow employees of my company to work.

Seized office persons together with employees of Department of internal Affairs, CJSC in Moscow, in violation of the current legislation requirements, held for inspection and withdrawal of statutory and working documents, stamps, flash drives, servers my construction companies.

After illegal penetration of the specified persons in head office of the company, constituent documents of my companies, the press, electronic Bank keys which weren't withdrawn by police officers, during illegal survey of the room were gone.

In addition, in the period from the end of January 2019, during the illegal removal of me from the management of the company, as a result of interventions in their economic activities by persons beyond my control, actions were carried out to withdraw funds to the detriment of the fulfillment of financial obligations to counterparties. These actions were carried out Teplinskaya Leroy Dardanelles and Yusupov Vladislav Ilukevich, who acted at the direction of Nisanov Year Semenovich and other unknown entities. these actions are the evidence of a criminal offense" 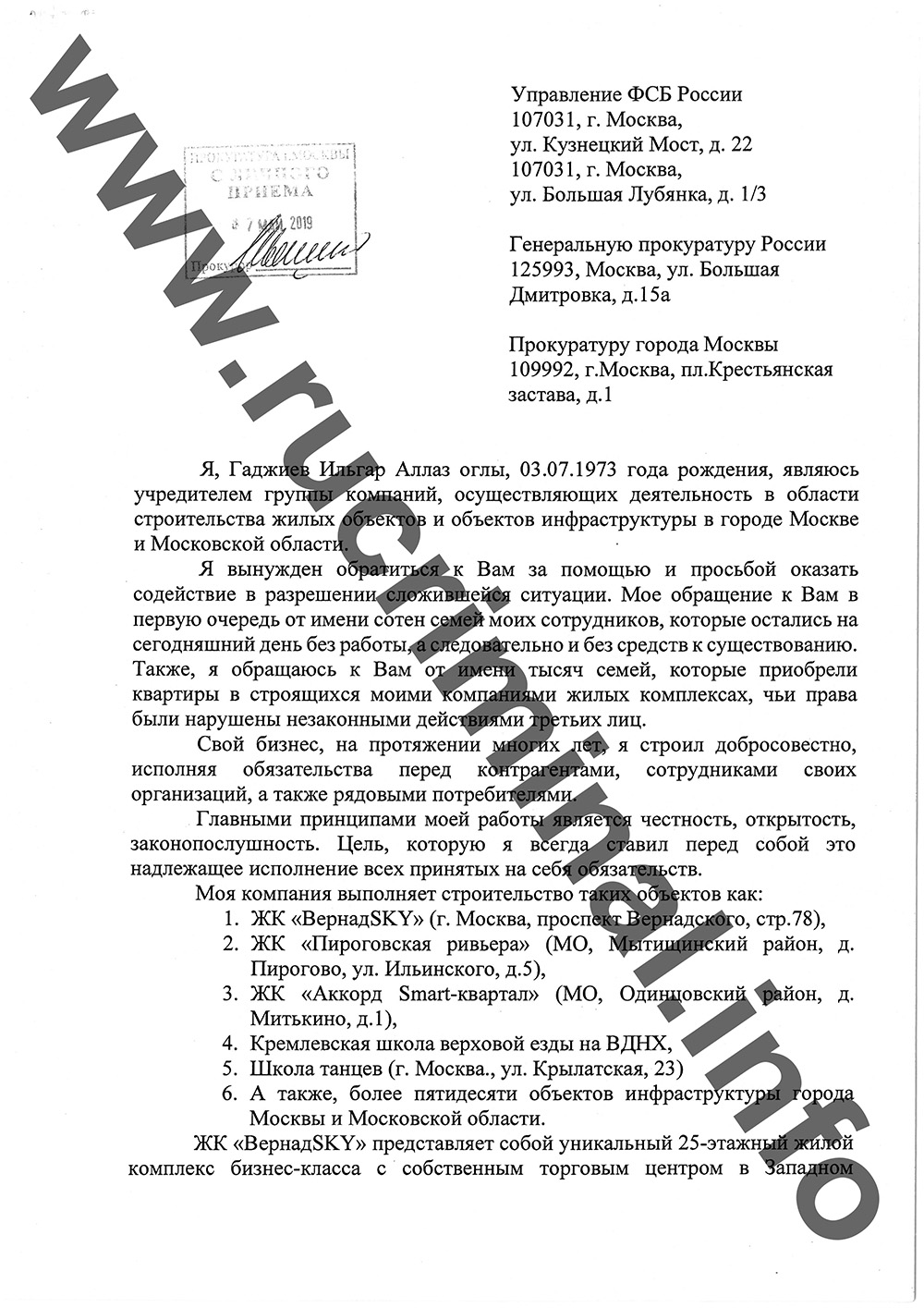 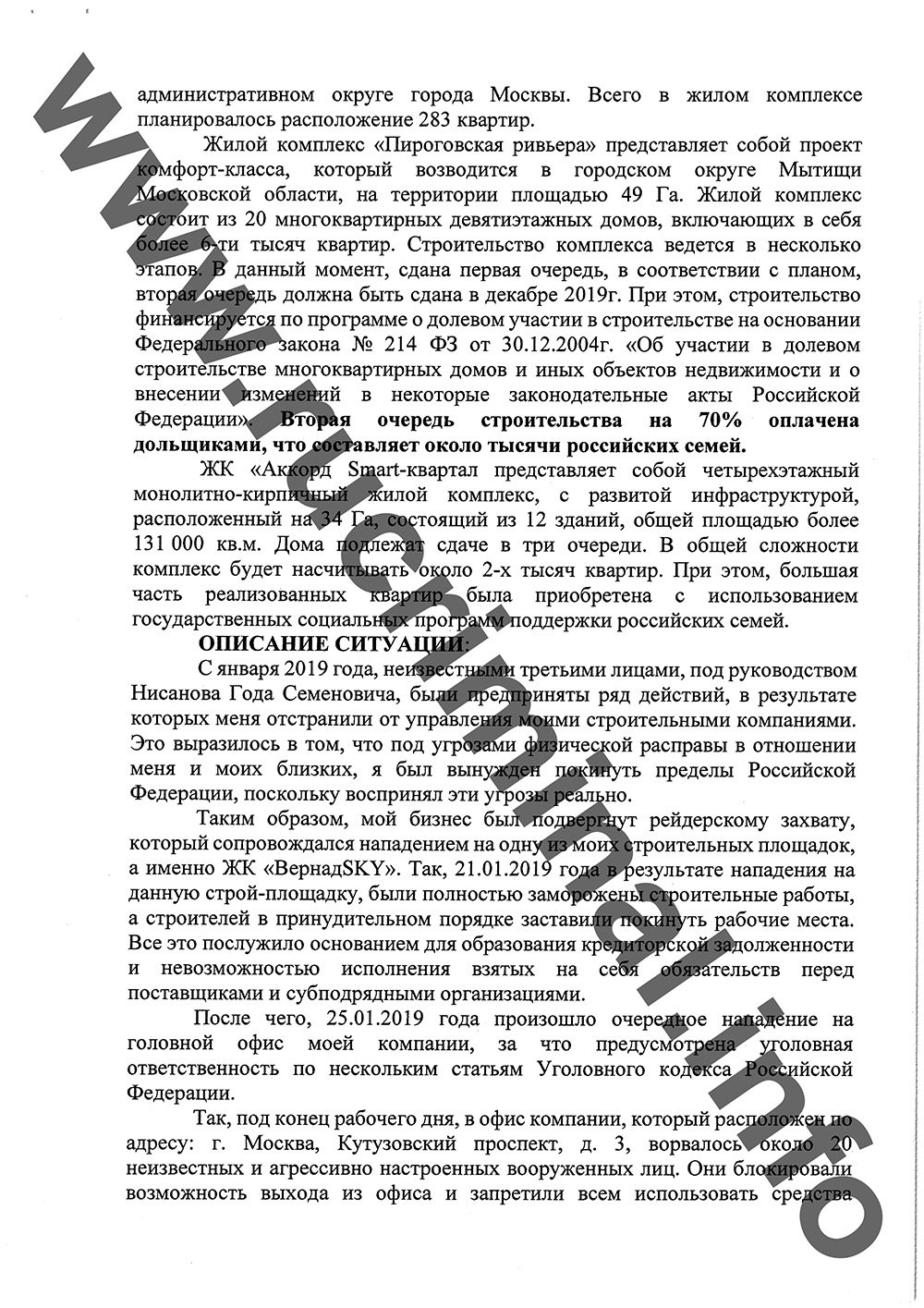 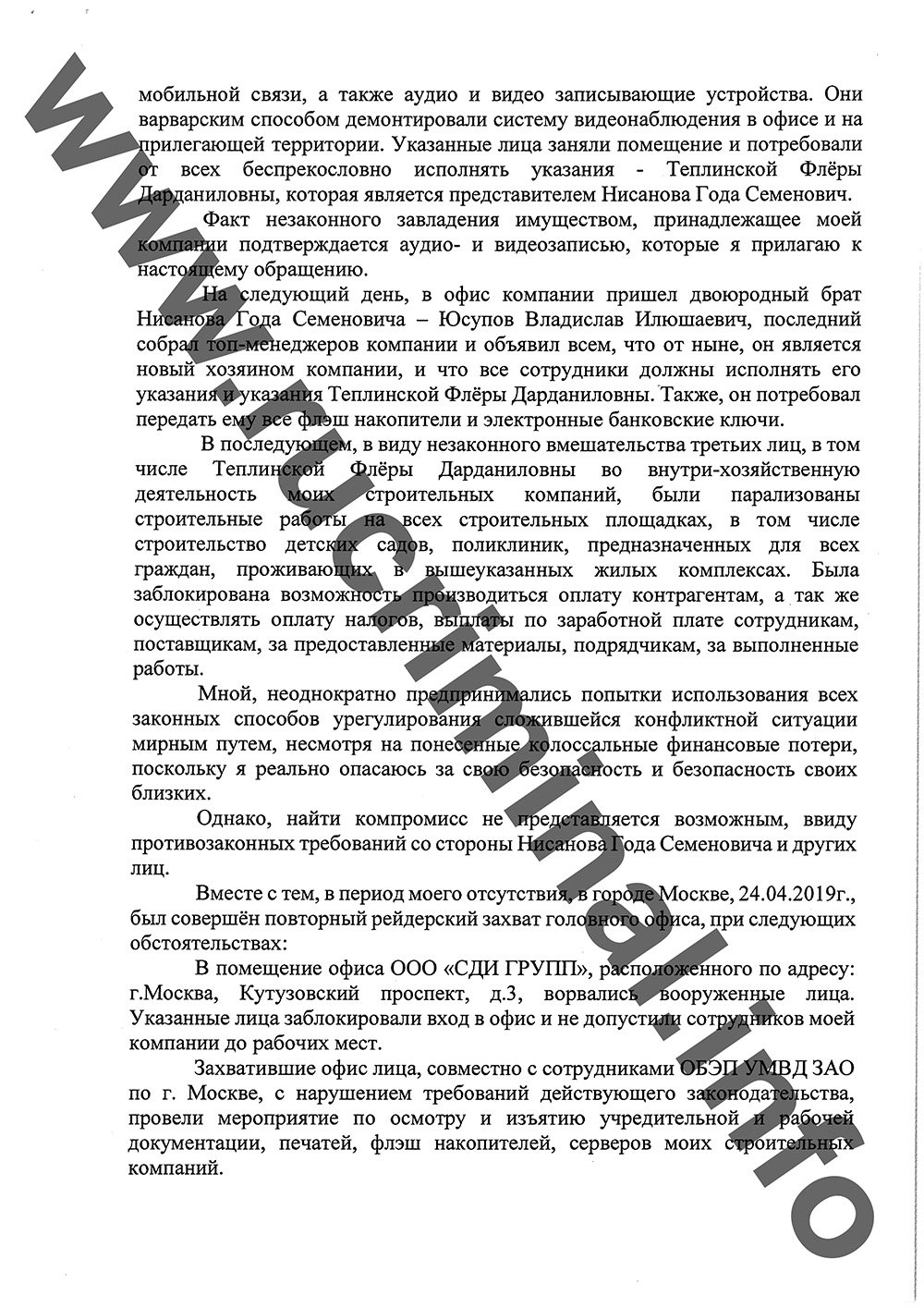 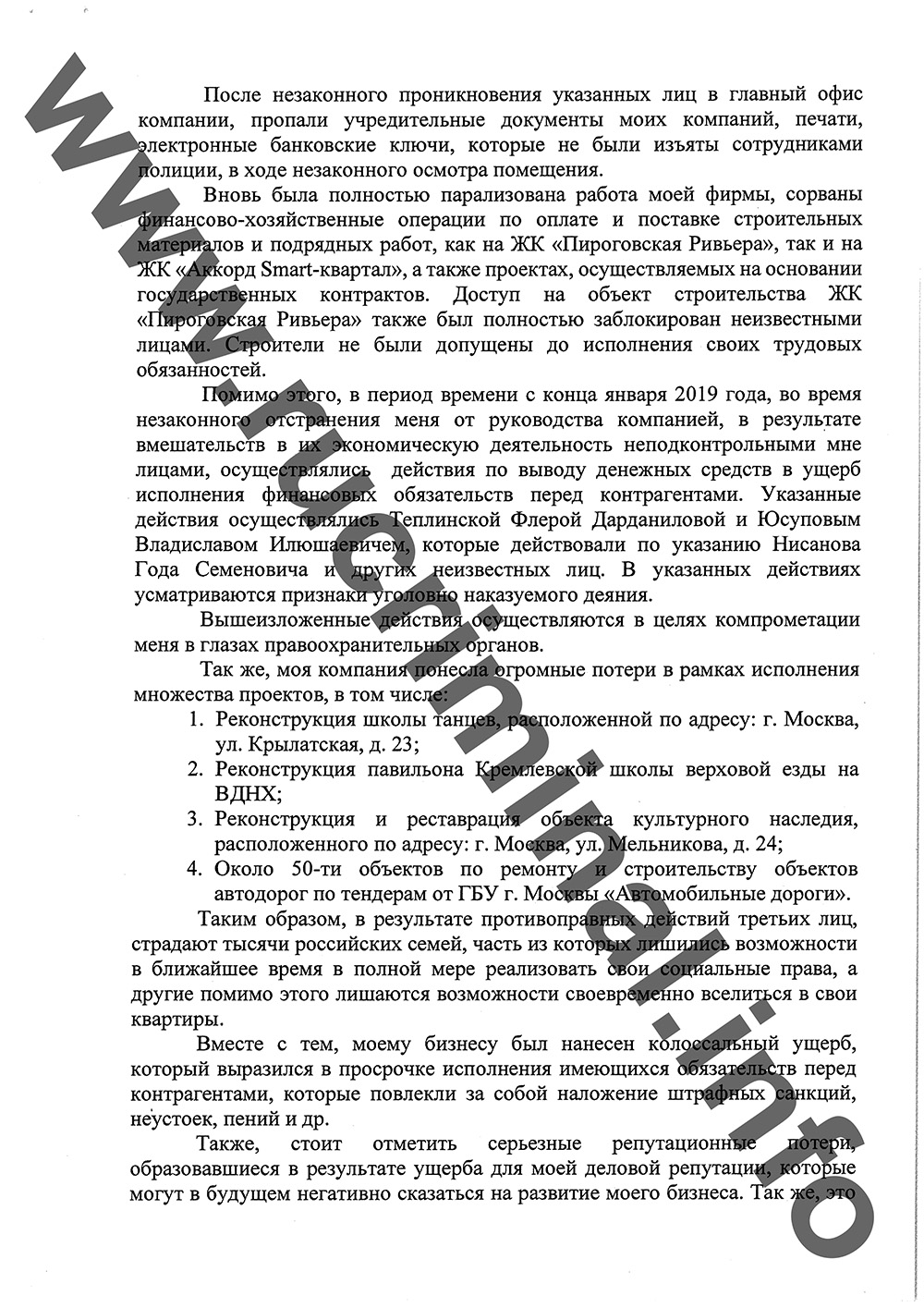 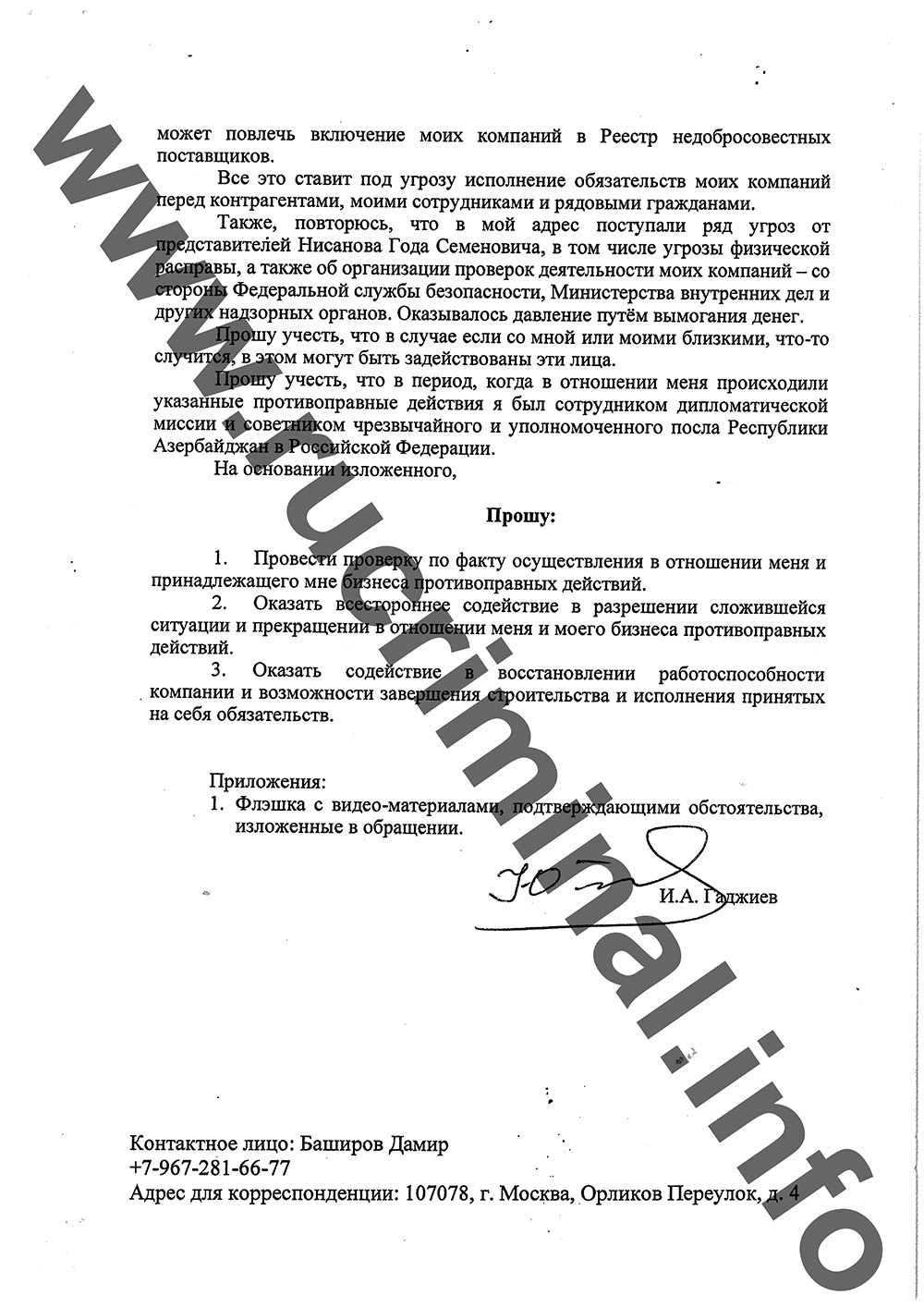