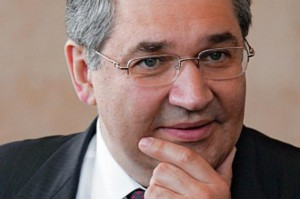 General Director of VGTRK Oleg Dobrodeyev is now considered one of the main information guards of the Kremlin. However, the deluded inhabitants of the Kremlin is not worth it. Oleg Dobrodeyev is ready to serve absolutely anyone who gives him a TV channel and large sums of money. And he has no other principles of selection of "owners". A typical example of "past life" when Dobrodeyev was with Gusinsky and Berezovsky, is recording conversations teledebates archive wiretaps Berezovsky, kotorym publishes Rucriminal.info.. the Second source is WOMEN. During the conversation, Dobrodeyev helpfully informs Boris Abramovich about the "hit-and-run" on him in the newspaper "Business World". Berezovsky says that this is a provocation and the same article is in the "Express Newspaper". They talk about Kislinskaya, the response of the military Prosecutor's office to the request of TASS, the destruction of documents.

D: Boris, listen. You know, you're the target of the Business world today, you know that?

D: So I don't even know what kind of newspaper it is...

D: So, but here is an article titled "Again the same Berezovsky» …

D: Where is published supposedly your green card American.

B: yeah, well, it's not just there, it was published today in the Express Newspaper.

B: Yeah. It's just, it's kind of a provocation from start to finish.

D: It's just... you know what it is, you have to sort of think about how to track the course of all these things.

B: What do you suggest we do?

D: I don't know, like, you know, there's a certain line in all these stories and all these leaks.

D: Where all this is coming from. Here, and in General, I like... Well, look, here are all these articles. Yesterday you know how Kislinskaya gave TASS about the refutation of the main military Prosecutor's office on the fact of destruction of documents in the Kremlin.

B: How she gave the retraction, I don't know…

D: Well, yesterday TASS gave Larisa Kislinskaya, TASS correspondent, that the main military Prosecutor's office (B: Aha) said, in response to the request of TASS, which means that the documents upon the destruction of which the case was opened, were destroyed not (illegible) Korzhakov in the Kremlin…

D: And so, it was just said, in a particularly difficult and delicate situation was the head of the administration Chubais and so on.

D: So just fan go these things, and as I do not know, there is, in the end, there are Sevastyanov, there is someone, as should always (inaudible) go to comment, because they go fan, and I certainly understand that the situation – you can ignore it, but it seems to me, there is already further ignore ... (inaudible) all.

D: And you have to say that it all comes from a single center.

B: Let's make a plan, here I am also going to Volodya, I'm going to Palych, are you there or not?

D: No, I'm always in Ostankino.

B: All Right. Oleg, thank you very much. So I'm gonna think, okay?

B: Thank you very much.

B: Well, there's also the Express Gazette, which is the same thing. …

B: All, thank you very much.