"Borenka, you party task on Chubais"

Valentin Yumashev gives instructions to Boris Berezovsky, what Sergey Dorenko should talk about 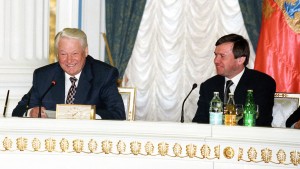 Last week, a lot of noise did interview Valentin Yumashev Andrey Malgin. So the former head of the presidential administration (under Boris Yeltsin) responded to the allegations of Andrei Illarionov that Yumashev only portrayed a Democrat, but in fact has long been associated with the security services and actively promoted their representatives to senior positions in power. According to Illarionov, Yumashev contributed to the fact that Vladimir Putin stood at the head of the state. In response, Yumashev gave an interview to Malgin, from which it follows that Valentine had little influence, was a technical performer. At the same time he distanced himself from Putin.

In connection with these events, rucriminal.info continues to acquaint the reader with "wiretaps" from Boris Berezovsky's archive. Today we have three talks. The first is between Berezovsky and Yumashev.

The first is extremely concerned about the article, which should be published in the MK about Anatoly Chubais. Yumashev wants her removed from the room.   Berezovsky says that if there's room in it to stop anymore, and if it is possible. Passes the phone Zverev, who owns the question. Yumashev says that Tatyana Dyachenko called, worries. Material goes in "MK." Zverev says that he knows, but there is no one in the editorial office, it's Saturday night, if the room is Monday, it is already for sale. Position in the editorial is, people he knows. We should look for a newspaper now. Yumashev suggests that a signal copy from the editorial office is sent to the Ministry of internal Affairs. Zverev promises to find out. Returns the tube to Boris Berezovsky. He reports that after 2 hours flying to Omsk. The question is, how Yumashev feels. The replies, that in Monday, goes on work. Berezovsky asks, as there (in Omsk) someone find. Yumashev says that it will come out themselves, Polezhaev knows everything.

The second entry, published Rucriminal.info again talking Berezovsky and Yumashev. As you can see, the article in MK still came out. Yumashev and Berezovsky gives another party the task asks, is it possible to insert today transfer to Dorenko, the idea that is currently "hitting" on Chubais to break the pivot on which everything rests. He proposes to formulate all theses to Berezovsky himself. Sense only in is, that MK works on enemies. Make an appointment. Berezovsky says that he has a meeting with Zakayev and then it is necessary to discuss everything (plans for Chechnya)

On the third record, which leads Rucriminal.info, Berezovsky talks to Sergei Dorenko and gives him a detailed setup of what to say about Chubais in the program. Exactly executes the instructions of Yumashev. Very detailed "draped" MK. Berezovsky explains how to humiliate MK. Dorenko guarantees an interview with Chubais. He says that the problem with Belarus came to the first place.