The suburbs bandit: authoritative Gogi decided to become a member 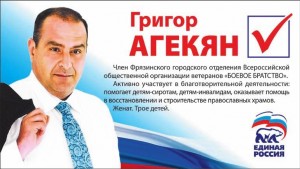 On September 8, 2019, residents of the Moscow city district Shchyolkovo will elect a new Deputy corps. In the lists of candidates from "United Russia" with the number 1 at the first district contained the local businessman Grigor aghekyan, famous in the 2016 fight with fryazinskiy Deputy chief of staff, the late Shipulina by Cecevim. Many of the media and even the Federal TV channels widely replicated that tragic incident ended the criminal case... against the ex-mayor Fryazino Igor Sergeyev, the witness on which now stands... he is a construction magnate Grigor aghekyan. At the same time, lawyers and officials involved in the complicated process are puzzling over a simple question – why did not the "unspoken owner" of the local places Agekyan be imprisoned for the use of military and also unregistered weapons. The upcoming elections, like a mirror of all the intricacies in the relations of business, power and the mass, that is, the ordinary voter, revealed the image of the "Goga"rushing into power. Rucriminal.info begins to publish the investigation in respect of Agacan. 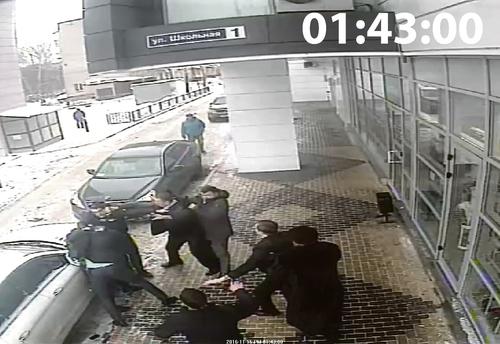 DEATH OF A MIGRANT

The following information is freely available on the website of the Tajik labour migrants social movement:

She, along with her husband by Aliberdieva by Bahodur worked in the construction company "Grand", the mastermind, Creator and President of which is a successful entrepreneur Valerie Grigor aghekyan. Grigor aghekyan promised the authorities of the city of Fryazino in the middle of 2016, "finally close the old and dilapidated housing 6-7 quarters (Gorky street, Nakhimov and Popov)". And this promise was in a hurry to fulfill the deadline.

08.04.2016 year in connection with the delivery of the residential complex on Nakhimov St. (adjacent to building 14 a) and the arrival of the admission Commission of the city administration, Directorate of LLC "Grand" was brought in to wash the Windows of multi-storey residential houses of its workers from among the women.

The workers were promised a payment of 600 rubles, but were not instructed in safe working methods and did not ensure compliance with safety standards.

As a result, 08.04.2016, approximately 15 hours. 30 min. Moscow time, when washing Windows from the 8th floor of a multi-storey building fell out of the window and crashed to death 40-year-old citizen of Tajikistan Muminova Mukhabbat. A criminal case was opened on the fact of her death. OOO "Grand" in the person of the President Grigoriy Valerievich of Agekjan decided to pay the promised spouse of the deceased Muminova to pay costs in the amount of 30,000 rubles for sending the body Home to Tajikistan.

As reported by migrants from Tajikistan rucriminal.info working at this firm, the management of LLC "Grand" ... put all the responsibility for what happened on lost. With this purpose the real culprits in the death Muminova Muhabbat influenced the result, so her husband Bakhodur Aliverdiev ... contained in the investigation Committee of the city of Shchelkovo.

Directorate of LLC "Grand" provided Aliberdieva the Bahodur lawyer Gavrichkova Oleg Vladimirovich, whose task was to convince her husband to make false statements to the investigator.

Husband Muminova Muhabbat was to assert that his wife did not work in OOO "Grand", but it was on the 8th floor of a multistory building only because he brought my husband's dinner to the workplace.

Participants of the all-Russian social movement "Tajik labor migrants" bring their condolences to the husband, 8-year-old son, parents and friends of the deceased Tajik citizen Muminova Mukhabbat. We mourn together with all the Tajik people.

As for the President, OOO "Grand" Gregory Valerie of Agekyan, the members of the movement hope that he will find the courage, is guilty of the Directorate of construction, the company will pay compensation to the family Muminova Muhabbat, who died in the workplace.

To this end, we remind the candidate for district No. 1 in the city district of Shchelkovo from "United Russia" Grigor Agekyan said the same words:

"Unfortunately, the word "conscience" in the modern world is outdated, gone from the lexicon. And I consider it the most important, I live on conscience itself and I demand the same from the subordinates. Neither in life nor in business can you cheat and betray. Someone may think that the momentary benefit of lying will justify itself, but in the end it is always the way to destruction."

It turns Out that you, Mr. agekyan, contradict yourself if you say one thing and do quite the opposite, that is, you live not in conscience and shame! »

Egregious case occurred with the change to the construction project of Agekjan of the General Plan in the area of the sacred place where in 1943 rd in the old building of school No. 1 lived and trained in the basics of landing illustrious participants Bukrinsky landing on the Dnieper. Among the veterans was Gregory Chukhrai, the author of " the Ballad of the soldier "and" Forty-first", but even this name did not help. Master plan local MPs changed quietly, stealthily in July 2018.  Deputies, among them school principals –shifters Irina Konovalova and Alex as a peasant - not confused, that the present building of the school №1 is bursting at the seams from duhomenko (by the way, these so-called "teachers" is very uneven breathing to the side of the "benefactor" with the criminal reputation of Agekjan).  And, despite petitions of citizens not to encroach on sacred, "elect" decided to build a residential elite house instead and on the place of school.  Because, they say, the Governor of Moscow region Andrei Vorobyov still not in a hurry to build schools in Fryazino (none appeared for more than 30 years!), and with the General Plan did not even think to understand, although he was asked about it by his colleague in the party , the Chairman of the defense Committee, General Shamanov.     The problem of building the second building of the first school, which was finished by the son of Agekyan, was not interesting at all .

- But isn't it time to remind Goga that today is 2019, not the 90s? – in one voice write to the editor rucriminal.info zahorany, presence, vranovci, Losino-Petrivtsi and shilkovci, knowing that today's methods of "extraction" of land for the construction of high-rise buildings at this oligarch is not civilized.       Dirt, filth, meanness, chaos. Within the memory of many local Armenians to the murder of the former construction tycoon Kochayan, but who ordered it? This question is being asked by representatives of the Armenian Diaspora in Fryazino. A sharp signal to the Public chamber of the Moscow region was the address of the resident Fryazino Timothy Balyko, that at the public hearing opposed the building of an apartment house in Grebneva of Agekian in the buffer zone of the estate. But instead move to the highway at 50 – 100 meters, angry Gogh was personally threatened with violence Timothy (oral that will put the young teachers in the trunk of a car and drive where necessary), and the house was built in the protected zone. AU, where are those who were obliged to monitor the violation of the norms of protected areas of monuments of Federal importance? Surely all bought with impunity and not react?!

Earlier Rucriminal.info already published detailed help of the security services in respect of Agacan. It follows from this that G. V. aghekyan in the mid 90-ies got a job to the head of the pilot plant in Fryazino and well-known businessman – Senovo Alexander Alexandrovich. Having gained the confidence of the wife Zenova A. A., was able to ingratiate himself with the inner circle of relatives Zenova A. A. and became indispensable to the family.

At the end of may 1998 Zenov AA, carrying a large sum of money at the time, was in an accident and after a long stay in a coma died. In this case, the money was in the car, and a larger amount who were in the safe of the enterprise, after a tragic accident has disappeared, and while the victim was in a coma, the owners of the main real estate became G. V. aghekyan it is known that the keys to the safe were only Zenova, A. A. and G. V. Agekyan

A similar incident occurred in mid-2006, when he was killed Kochoyan Gevor Milosevic – to begin a highly profitable business in the field of construction of residential houses, the sole owner of which, after the tragedy, was G. V. aghekyan, participating as a partner in only one small project. More detailed information is contained in the copy of Protocol of interrogation of the wife Chocoana G. M. – Ulgulan Marina Ashotovna in criminal case No. 132589, drawn up by the investigator for particularly important cases of the Prosecutor of the Moscow region (5L.). 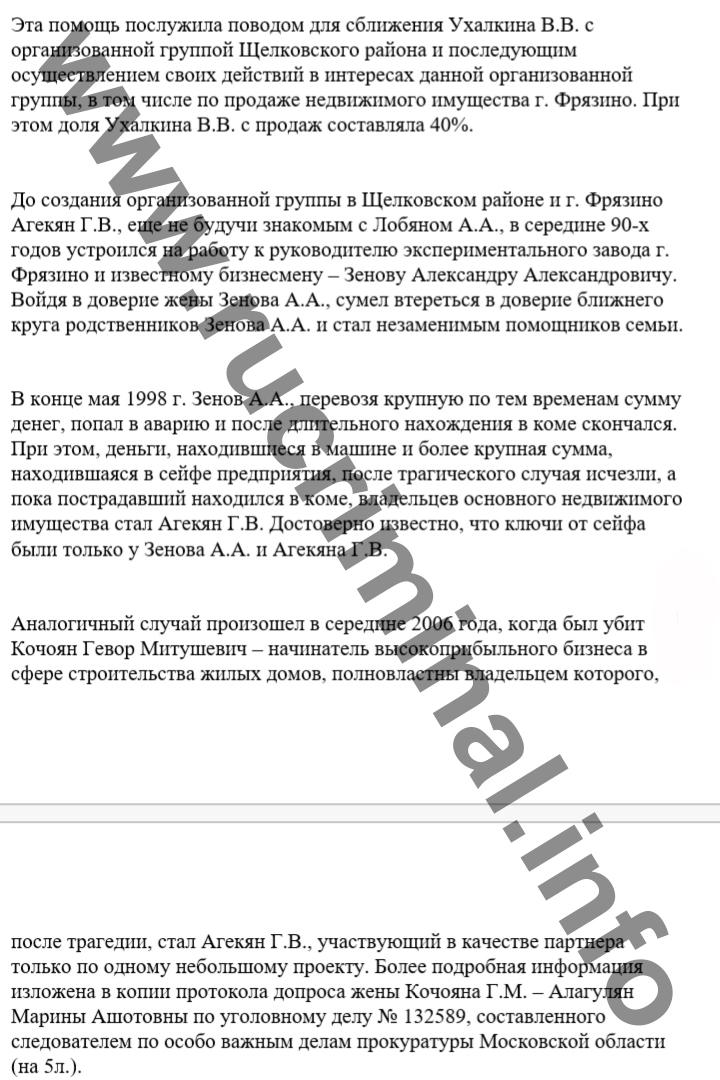