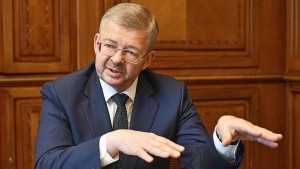 One of the main topics for discussion in the banking sector in recent years is the situation with Genbank and its ex-owner Yevgeny Dvoskin, a longtime favorite and good friend of the first deputy chairman of the Central Bank of the Russian Federation Dmitry Tulin. Dvoskin, having an extremely reliable cover in the Central Bank of the Russian Federation (in addition to Tulin, his deputy chairman Vasily Pozdyshev defends his interests), did what he wanted. “Genbank” almost openly engaged in “cash out”, “envelopes” and other illegal banking operations. Received funds, including budget, Dvoskin disposed of as he wanted. The government of Sevastopol, which through the Ministry of Property and Land Relations owns 25% of Genbank, tried unsuccessfully to include its representatives on the board of directors of a financial organization. However, Dvoskin sent them to hell. The Central Bank of the Russian Federation did not respond to numerous appeals.

Recently it became known that the “hole” in Genbank is 25 billion rubles, but Tulin and Pozdyshev stubbornly did not want to notice it. However, the situation became critical and was noticed by the government and the presidential administration. Dvoskin in 2016 with the support of the Central Bank of the Russian Federation has already received 1.3 billion rubles from the budget for recapitalization of the bank. They were quickly dissolved. In the spring of 2017, he asked for the same purposes from the budget already 10 billion rubles. But Genbank was denied. At the same time, it became known that Dvoskin has fictitious Russian citizenship. Clouds began to gather over Dvoskin and his “brainchild”. Everyone wondered how this story would end for him. It ended with the direct participation of Tulin just fine. With the active participation of Tulin, it was decided that Genbank would be reorganized and would join Sobinbank, the “daughter” of Rossiya Bank, the Kovalchuk brothers. Thus, the withdrawn 25 billion will forever remain with Dvoskin and he does not face criminal cases.

Why does Tulin treat Dvoskin with such reverent love? The history of their relationship lasts from the 90s. In 2004, Tulin for the second time was appointed to the post of deputy chairman of the Central Bank of the Russian Federation. At the same time, Alexey Ulyukaev, with whom Tulin is on friendly terms, took a similar position. According to sources at rucriminal.info, at that moment there were several major mega-groups of cash-in-cash groups: Evgeny Dvoskin and his partner Ivan Myazin; Jumber Elbakidze; Boris Sokalsky .; father and son Alexander and Vladimir Antonov. Elbakidze had a powerful "roof", Dvoskin did not dare to fight with him openly. But he considered Sokalsky to be the main competitor and was ready to finance the operation to remove him from the business. With the arrival of Tulin in the Central Bank, a real hunt began for the banks controlled by Sokalsky. Clearly, in the interests of Dvoskin. The licenses of the banks Imperial, Vertical, Rodnik, NEP Bank, AKA Bank, etc., were sequentially revoked. Sokalsky managed to get one of the tanks in Yaroslavl under his control, and immediately, on the command of Tulin, his license was revoked. At this time, Sokalsky was already in the “development” of the Interior Ministry, who recorded the conversation between Sokalsky and his partner Sergei Turbin. During her, they discussed that Tulin needs to be "removed" somehow, since he is hunting them after the "order" of Dvoskin and Myazin. Then the meeting of Sokalsky and Myazin took place, on which the parties tried to agree. Sokalsky asked to calm down the man Dvoskin and Myazin in the Central Bank of the Russian Federation. However, they did not find a common language. Having decided that Sokalsky could reach the physical elimination of Tulin, the information was transferred to the Central Bank of the Russian Federation. The most interesting thing is that Tulin urgently asked not to give her a move (not to initiate an appropriate case). At the Central Bank, his help to Dvoskin and Myazin did not go unnoticed, so he preferred to quit.
There was another reason for the dismissal - the murder of the first deputy chairman of the Central Bank of the Russian Federation, Andrei Kozlov. Tulin and Kozlov have been familiar since the 90s, when both worked in the Central Bank of the Russian Federation. Then Tulin was the head of Kozlov and almost “broke” his career. In 1993, Deputy Chairman of the Central Bank Dmitry Tulin instructed Kozlov to develop a borrowing scheme in the market. Together they thought through the whole chain of T-bills (state short-term bonds), but authorship was entrusted to Kozlov. After the default, which led to many T-bills, Kozlov resigned.
When Tulin returned to the Central Bank in 2004, he had already become a subordinate of Kozlov. According to sources of rucriminal.info, it cannot be said that there was a “war” between them, but the relations were rather cool. In particular, due to the different attitude towards Dvoskin, Myazin and their banks. Despite the requests and warnings of Tulin, Kozlov consistently revoked the licenses of banks controlled by Dvoskin and Myazin. For example, banks Europrominvest, BELCOM, Neman. And by this time, Dvoskin and Myazin broke into the leaders of the markets. Tulin was just actively wetting Sokalsky. The security forces then began to press Elbakidze, and one of the members of his former empire, Alexei Frenkel, joined Myazin and Dvoskin.
And here is September 14, 2006 Kozlov