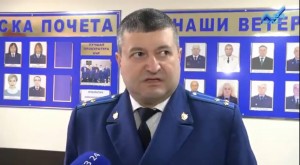 In early December, a large group of security officials from Moscow will arrive in Karachay-Cherkessia. The purpose of the visit is to detain law enforcement officers, on whom evidence has already been collected, and also to take a "note" of those who only recently came into the view of investigators and investigators. We are talking about law enforcement agencies for many years helping the Raul clan and ex-Senator Rauf Arashukovs. When Afaunov worked in leadership positions in the prosecutor's office of Cherkessk, he provided services to Rauf for a slightly different kind. Once Arashukov Jr. “laid eyes” on a piece of land in the area of ​​the motor-race track, which belonged to the structures of businessman Arasul Bogatyrev. On the go-ahead, Rauf Afaunov organized inspections at two Bogatyrev construction sites on Panfilov and Frunze streets. Work there was suspended. As a result, after long negotiations, Bogatyrev managed to solve the problem not with land, but with a large sum of money. Moreover, the help of Afaunov to the clan did not end after the arrest of the Arashukovs. In particular, this fall, close communication was recorded between Zurab Afaunov and Mikhail Arashukov, Raul’s older brother. Now in custody is his son Ruslan, who headed the gas distribution "daughter" of Gazprom in Astrakhan. According to investigators, he was part of Raul Arashukov’s group and participated in large-scale theft of gas. Ruslan is in custody and was recently transported from Moscow to Cherkessk. Almost immediately after that, Afaunov began to promise Ruslan's relatives, in particular his father Mikhail, that he had to “wait a bit”, and then he would arrange everything so that he would be transferred to house arrest. It is worth noting that Afaunov holds all such meetings and conversations in a regime of increased secrecy. He communicates only in restaurants where he has directors familiar with him (for example, in the August restaurant), and asks during his visits to turn off surveillance cameras.

The ebullient activities of Afaunov for the benefit of the Arashukov clan bring very good incomes. Afaunov owns 25% of the shopping center "Orange" (Cherkessk, Kavkazskaya St., 30), and a number of gas stations. Zurab is also currently building a luxury mansion in the center of Cherkessk (13 Tupikovy Lane), the cost of which, together with the land, exceeds 30 million rubles. The land and the unfinished building were recorded on the mother of the prosecutor.

In private conversations, Afaunov himself said that he “wanted to spit” on guests from Moscow and on local inspectors, as he was friends with the first deputy prosecutor of the KCR, Mikhail Shabunin, he knew a lot about him, and he covered him through his connections. Sources of Rucriminal.info highly doubt the veracity of such statements by Afaunov.