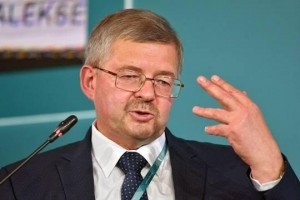 Rucriminal.info continues to publish an investigation about the first deputy head of the CBR Dmitry Tulin. He then came to the Central Bank, then left after scandalous stories. Another such return of Tulin to the Central Bank of the Russian Federation took place in 2015 and he immediately connected Evgeny Dvoskin, deputy chairman of the Central Bank of the Russian Federation Vasily Pozdyshev, to the “protection”. However, Genbank is only one of a large number of banks that ensure a worthy existence for two deputy chairman of the CBR and their families. For example, Tulin has a son Oleg Dmitrievich Tulin, an extremely wealthy young man. Officially, he held the position of Advisor to the General Director (he is Alexander Braverman) of the Federal Corporation for the Development of Small and Medium Enterprises JSC (SME Corporation JSC). This corporation has its own bank-SME-bank. Also, Oleg Tulin was and remains an affiliate in the following structures: Soyuz Bank, Russian Capital Bank, Emergency Insurance Company OJSC, Inogosstrakh Investment Investment Company OJSC, Mashprodukziya OJSC, Ingosstrakh Insurance Company, etc.

Dmitry Tulin is an active participant, built together with Pozdyshev, bank levy schemes. According to the source of Rucriminal.info in the market, rates and services are like that. The Central Bank checks the bank and artificially lowers the cost of collateral for loans and reserves. In order for this amount to increase to the bank you need, you need to pay 10-15% of the difference between the cost of collateral and reserves, designated by the Central Bank of the Russian Federation, and the value that the bank needs. The amounts obtained are very significant. Tulin and Pozdyshev specifically lobbied for a number of changes in various acts in order to deal with the following requisitions. Let's say a bank receives loans from shareholders and third parties. He wants to get them back. Tulin, thanks to these changes, imposes a ban on the pretext that the transaction is suspicious, reminiscent of the withdrawal of assets or laundering. If you want a ban, there is a need to pay 5% of the amount that the bank wants to return to the shareholder or a third party. Separate construction are: checking the Central Bank without consequences; controlled bank rehabilitation, etc.

Another “load” fell on Tulin’s shoulders. He personally conducts interviews with those who control the bank, but do not appear among its participants. Moreover, these are often businessmen who own oil assets, which Rosneft has “laid eyes on”. Thus, it is known that he personally persuaded Mikhail Gutseriev to officially take control of Binbank and MDM Bank. Thus, he framed Gutseriev. According to the plans developed jointly with Rosneft, further under the leadership of Pozdyshev numerous checks of banks follow with the identification of a large "hole". Everything is accompanied by leaks in the media. As a result, “Binbank” and MDM Bank “drew” “holes” of tens of billions of rubles. In the framework of claims for subsidiary liability, all these tens of billions can be claimed from Gutseriev, who earlier (after Tulin’s convictions) recognized the ownership of banks. Under these lawsuits, the state may take away from Gutseriev the entire oil industry, which Rosneft will then get. The situation with the Ugra bank and its owner Alexei Khotin, who also owns oil assets, developed according to a similar scheme.