How an oligarch escapes from an escort girl, mafia and sanctions 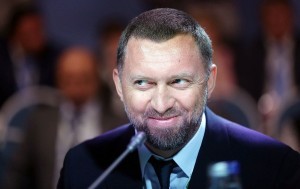 Oleg Deripaska became interested in censorship. He managed to get a ban on the release of Alex Leslie’s book “Go To Fish”, which published a continuation of the story with the amusement of Oleg Deripaska and his friend Sergei Prikhodko, current first deputy chief of staff of the Government of the Russian Federation, on a yacht in Norway with escort girls, including Nastya Rybka (Apprentice Alex Leslie). Deripaska also concocted a court decision in the Krasnodar Territory, with the help of which he tried (unsuccessfully) to remove from the American media publications about his ties to the Izmailovo criminal group. In both cases, Deripaska’s motivation is understandable. He really wants the United States to delete Deripaska from the sanctions list. And he was introduced there, just for the things indicated in the book of Alex Leslie and in the articles of the American media. Firstly, for close relations with Kremlin representatives who appear in the Democrats’ investigation into Russia's interference in the US presidential election. Secondly, for communication with the mafia. At the disposal of Rucriminal.info were documents confirming the last argument. The fact that Deripaska may be related to the criminal world is indicated in the materials of the Spanish investigation on money laundering by the oligarch. The Spaniards handed over the materials to Russia, where they promised to investigate, but in reality they quietly “buried”. We will provide excerpts from these documents. We also publish evidence that behind the fact that Alex Leslie's book “Go To Fish” will not see the light through the efforts of Deripaska. Formally, its publication was banned by Eksmo Publishing House, which received all rights to the book from Leslie, and then itself decided not to put it on sale. However, we have at our disposal an examination of “Go To Fish” ordered by Eksmo in the fall of 2019 from the professor of Kaluga State University, Vali Engalychev. This expertise was transferred by the publishing house to Roskomnadzor. So, the respected professor did not find any reason or violation of the law in order not to publish a book. Well, just that it is not intended for minors. Here are his conclusions:

"one. In the text of the electronic layout of Alex Leslie's book “Go to fish. What is Nastya Rybka hiding? ”There is information that is prohibited for distribution to children in accordance with the requirements of Federal Law No. 436-ФЗ“ On the Protection of Children from Information Harmful to Their Health and Development, ”namely, a socially unapproved lifestyle and a negative attitude towards the institution are postulated Families, traditional family values, use foul language. In terms of content and subject matter, this publication is intended for an audience of adults (adults). Age category "18+".

2. In the text of the electronic layout of Alex Leslie's book “Go to fish. What does Nastya Rybka hide? ”There are no signs of propaganda of non-traditional sexual relations (homosexuality) and signs of information of a pornographic nature. An analysis of this text shows that all the episodes described that mention the action with girls naked on the street, imitation of death recorded on a video camera, rape, sexual relations between men, situations of seduction of rich men, suicide incidents are general in nature, do not contain naturalistic details and used to enhance the emotional impression of the main plot of the book and maintain interest in the author, 3. In the text of the electronic layout of Alex Leslie’s book “Go to fish. What is Nastya Rybka hiding? ”There is no information aimed at inflicting damage on the honor, dignity and business reputation of specific individuals, especially since the author himself said in the Preface that the book describes the story that he invented and in which he directed. There is no reason to doubt his words. ” Now Rucriminal.info goes to the mafia part of the epic with Deripaska. Here is a document from the Prosecutor General’s Office that this department received from Spain criminal case materials against Deripaska and his partner Iskander Makhmudov. The list of charges is also indicated there: "The Prosecutor General of Russia

At your request, I inform you that on April 10, 2007 the Central Investigation Court No. 4 of the National Audience of the Kingdom of Spain instituted criminal proceedings (No. 101/2007-D) in respect of Makhmudov I.K., Deripaska O.V., and other persons under Art. . 515 (creation of a criminal community), Art. 301 (money laundering) and Art. 305 (crime against the State Treasury) of the Penal Code of the Kingdom of Spain. This is a criminal case, with the qualification of a crime under Art. 174, 210 of the Criminal Code of 12/07/2012, was transferred by the Deputy Prosecutor General of the Russian Federation in accordance with Art. 151, 459 Code of Criminal Procedure for further investigation in the Investigative Department of the Ministry of Internal Affairs of Russia.

The term of the preliminary investigation in the case was extended to 10/10/2015.

Deputy Head of the Supervision of the Investigation of Particularly Important Cases V.V. Ignashin. ”

The materials collected by the Spanish law enforcement officers, there was an extremely interesting reference. Just about the connections of Deripaska with the mafia. Here is a small fragment of it, we will publish the rest in the following articles:

“Deripaska ... was closely associated with transnational organized crime, and this fact is widely recognized ....

Deripaska is currently making special efforts to separate himself completely from the criminal circles with which he had previously collaborated. And, as indicated above, this applies to the Black and Izmailovsky criminal groups. To be precise, the main goal of this approach is to achieve an appropriate role in the group of oligarchs closest to the Russian administration ”...