The authoritative Paul Cho and the rich cry 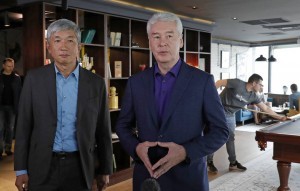 In the “City of Capitals” Tower, owned by the Capital Group, owners of premises cannot get into their apartments. The conflict between tenants and owners of luxury apartments in Moscow City and the management company Capital Group (Chairman of the Board Pavel Cho) has been going on for more than 7 years. Moreover, the owners of the apartments have a hard time, since Pavel Cho has rich criminal experience. He himself was tried, and maintains close relations with representatives of the criminal world. According to Rucriminal.info sources, the reason for the disagreement is the desire of the owners to rent out their premises, which sometimes cost millions of dollars. This meets with fierce resistance from the Criminal Code. Under the tacit direction of Capital Group Pavel Cho, the reception staff will not issue a pass and access card to tenants and their guests.

In 2012-2013 with the Criminal Code, litigation initiated by a group of owners in which the Capital Group lost.

In 2016, a group of residents of the City of Capitals tower tried to change the management company by creating TSN. The reason was that the Capital Group management used elevators in priority mode for personal purposes, forcing the rest of the owners to wait a long time for them. In a multi-story tower, such an expectation could drag on for almost an hour. In addition, the management company increased the cost of operation for owners every year. At the same time, she did not index the cost of operating her own premises in this complex. As a result of the dispute, Capital Group was able to maintain management of the complex by simply changing its legal entity and entering the board of TSN. Restrictions on use rights are not available to all tenants and owners. The management of the company allows someone to fully use their space, and someone poses obstacles. For example, for some tenants, access to the premises is allowed only through technical floors, from which the priority of the elevators is indicated the lowest and the wait is from 10 to 30 minutes.

Another part of the owners is completely limited in their rights to get into their apartments without explanation.

In early April 2020, a group of owners, by whom the Criminal Code completely blocked access to their premises, seized the reception desk of the City of Capitals tower and accessed visitors independently. The Criminal Code and the "invaders" regularly call the police, which can not do anything. The confrontation continues at the moment, sources told Rucriminal.info, the owners continue to keep the reception, the Criminal Code cuts off their electricity, closes the toilets. Representatives of the Criminal Code flatly refuse to meet and discuss the current situation, and the owners are preparing a new appeal to the court.

Similar problems are observed in the other Moscow City complex owned by the Capital Group - in the OKO tower.

Here, the company involved in the rental and management of apartments of different owners (Sky Apartments) is faced with similar problems by the UK. So, in December 2019, Capital Group disconnected the apartment in which the guests were at that time from the power supply.

At the same time, Pavel Cho’s employees are imprisoned for conducting provocations against owners, they receive threats. Given Cho’s past and connections, these threats make them extremely serious. . The documents found at Rucriminal.info indicate that Pavel Te was convicted in his native Uzbekistan. On August 10, 1988, he was arrested and then sentenced to four years on charges of committing a crime under Article 147 of the Soviet Criminal Code (Large-scale fraud or organized group). Pavel Cho served time in ITK-29 of Navoi, Uzbek SSR. And on February 16, 1990, the Navoi court decided to replace Those with the remaining term (2 years 3 months 15 days) by a conditional one. Then he went to Bukhara, and then he appeared in Russia and became a co-owner of Capital Group in 1993-1994. What is noteworthy, four years after this, Pavel Te was registered with the IC as a convicted citizen. When electing a deputy, the head of Capital Group forgot to indicate his criminal record. One of the main defendants in the case of giving a bribe to employees of the Investigative Committee for the release of “authority” Andrei Kochuikovav (Italian) was his friend, also “authority” Oleg Sheykhametov (Oleg Sheikh). In recent years, the Sheikh has been engaged in business, primarily construction. And his partner in these projects was the co-owner of Capital group Pavel Te. In particular, Sheikh and Te had a joint project - the construction of the residential complex “Faces”.