Crabs and champagne for bankrupt 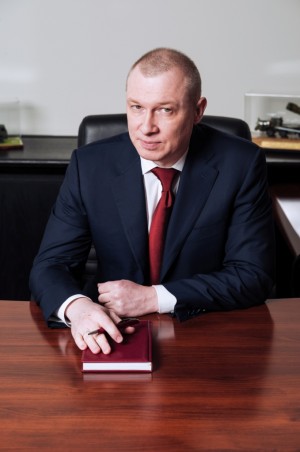 Motovilikhinskiye Zavody (MZ), performing state defense orders, is truly a long-suffering enterprise. First, top managers close to the owner of Tashir Group of Companies Samvel Karapetyan launched his funds into his funds. And now it turns out that his former director general, Alexander Anokhin, was literally booing with the money of the plant. In the case of Karapetyan, the criminal case was “hushed up”. Anokhin’s actions have yet to be evaluated by the investigation. Details are in the investigation of Rucriminal.info. 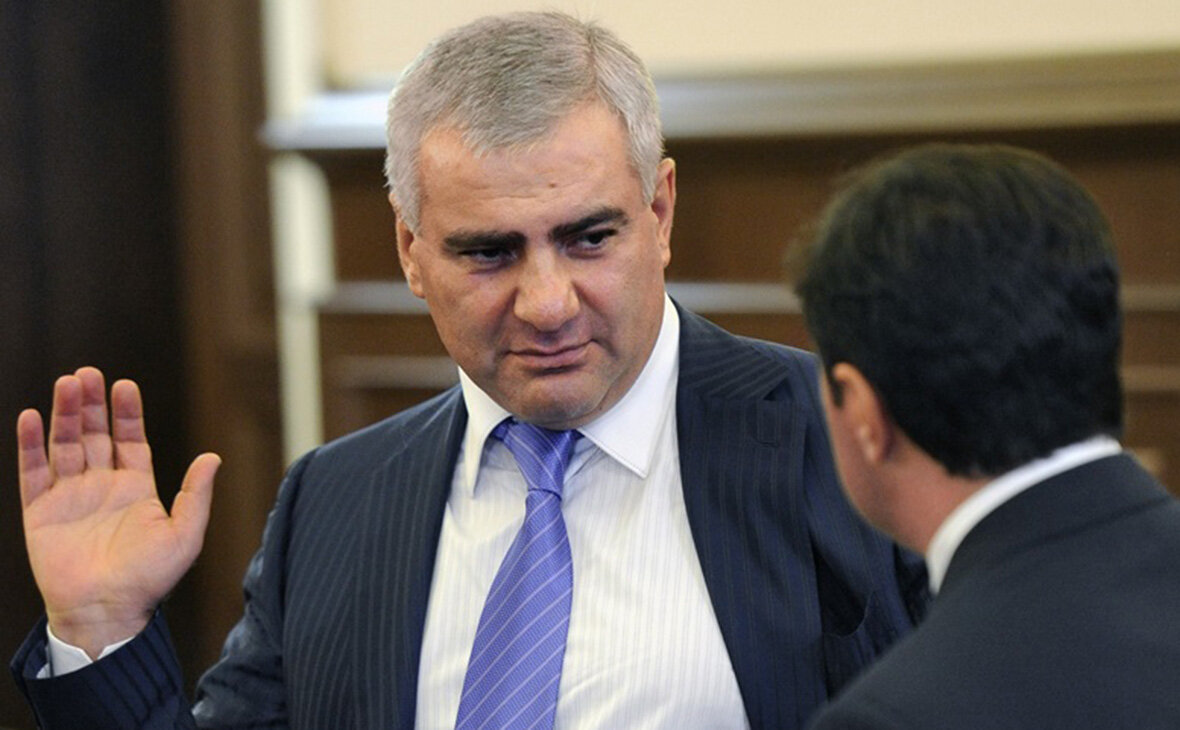 The owner of the Tashir Group of Companies, Samvel Karapetyan, is a businessman extremely close to the family of ex-Prosecutor General Yuri Chaika. For his sake, Yuri Chaika even somehow went into conflict with the head of Rostec, Sergei Chemezov. In 2016, according to a statement from Rostec in the Perm Territory, a case was brought against Vagarshak Sarksyan, co-owner of Motovilikhinsky Zavody (MZ). He was suspected of large-scale embezzlement of funds of the Ministry of Health. In reality, the factories were controlled by Karapetyan, Sarksyan is his friend and business partner. The local prosecutor’s office immediately reversed this decision. Then the head of Rostec, Sergey Chemezov, personally wrote a letter to the chairman of the Investigative Committee of the Russian Federation, Alexander Bastrykin, with a request to understand this issue. Bastrykin, in turn, turned to Prosecutor General Yuri Chaika with a request to cancel such a decision. But long-standing, good relations with Karapetyan were more important for Chaika. As a result, Chaika refused to Bastrykin and Chemezov. The investigation was never resumed.

Now, his former director general, Alexander Anokhin, is suspected of using the MH funds. As it became known to Rucriminal.info from a source close to the Motovilikhinsky factories, the enterprise’s security service is conducting an internal investigation based on the results of the previous team, as a result of which the subsidiaries of the plant were in a crisis. According to the results of the first quarter of 2020, the Motovilikha-Civil Engineering subsidiary received less than RUB 500 million in revenue, net profit fell 20 times, effectively “nullifying” the cash balances in the accounts and thereby driving the company into deliberate bankruptcy. No less sad are the results of SKB CJSC, which is already disrupting the terms of the state defense order, jeopardizing the country's defense capability.

Such results were the logical result of the work of the team of Alexander Anokhin, who threw all his strength not at restoring the enterprise, but at stuffing his own pockets with state money. Even realizing that the hour of reckoning was near, instead of stopping, he methodically emptied the accounts of subsidiaries by paying for the maintenance of an expensive Moscow office and increasing his own payments. As a result, today the company has nothing to pay the salaries of 5,000 employees and mandatory payments. It was an outrageous fact that the bankrupt enterprise in one building in Moscow had redundant representations of MGM LLC and SKB CJSC with a full staff. An interesting fact is that in the list of employees of representative offices in different positions there are acquaintances and friends of the glamorous director with an average salary of 200 thousand rubles. The cost of their maintenance of Moscow offices cost the company 130 million rubles annually, withdrawn from the article on modernization of the enterprise. As a result, today depreciation of the main equipment exceeds 90%.

A little background, Alexander Anokhin officially employed himself as the general director of all subsidiaries and appointed himself a more than decent salary: in terms of the aggregate of payments, his monthly salary amounted to 3.4 million rubles, which is 80 times higher than the salary of a simple locksmith for enterprises and even higher than directors of large defense enterprises. Anokhin did not shun anything to increase his salary, taking every penny from the enterprise. By special decree, he made himself a 75% allowance for working with classified materials, with a norm not exceeding 50%. Receiving such a salary, his appeal to Rostec looks particularly cynical with a request to compensate for the rental of an apartment in Moscow in the amount of 230 thousand rubles a month, indicating in a letter that his salary does not exceed only 30 thousand rubles. The cunning manager “forgot” to indicate that he already had a salary of 1 million rubles in another Motovilikha organization and that he was able to pay for himself an apartment.

But this money was not enough for him, and in February 2020, he lobbied for a double increase in his salary at MGM LLC, and in March 2020 he paid himself and his team bonuses based on the results of “successful” work in 2019 and compensation for dismissal totaling 35 million rubles. Personally, Anokhin wrote a “golden parachute” of 27 million rubles. Given that according to the time sheets A.V. Anokhina In 2020, he stayed at the workplace in Perm for only 22 days, in 2019 - only 45 days. The table below shows the actual work schedule in 2020. White indicates the actual time spent in Perm, red indicates official holidays and weekends, blue indicates the time of business trips.

Taking advantage of his official position, Anokhin himself sent him to Switzerland or the United Arab Emirates, then on a trip to Russia - Moscow, St. Petersburg, Sochi (all again at the expense of enterprises). The costs of his business class flights and accommodation in five-star hotels cost the company 14 million rubles. Some business trips still cause bewilderment, what production issues was solved by the director in the cultural capital on New Year's Eve (from December 30)?

After examining his advance reports, the auditors first doubted that they had documents from the director of the defense enterprise, and not checks from the purse of a glamorous Moscow party-goer and a millionaire throwing money left and right. But in the end, it turned out that Anokhin with special chic and zeal spent the representative money of a bankrupt enterprise on his own pleasures: on personal basketball training, ordering VIP lodges at top sports competitions, expensive gifts, such as hundreds of thousands of gift cards from TSUM, expensive restaurants such as La Maree, drinking expensive wines worth 20 thousand rubles per bottle and seizing it with crab and seafood. The editors have at their disposal documents confirming the scope of his spree. Our motot for one visit to the restaurant could leave there three monthly salaries of a locksmith at the factory. Instead of indexing salaries to his employees, he gladly stuffed his stomach with delicacies. Renting stands, paying for basketball training cost the company an additional 742 thousand rubles.

It is worth noting that in Moscow no one saw him at the workplace either, however, the company regularly paid maintenance costs and gasoline for the car on which he drove to restaurants. At the same time, he stole even gasoline, fueling the car daily for 100 liters. Judging by the documents submitted to the accounting department, the glossy director collected checks at gas stations to confirm expenses. The checks always reflected different refueling bonus cards. I wonder where he went to 100 liters of gasoline was not enough for a day? The costs of car maintenance also raise a lot of questions. Each visit to the station cost at least 100 thousand rubles, expensive repairs were carried out endlessly. It would seem that the car should be straight away, but the photos suggest otherwise. The editors have several photos of the car at their disposal. It was on this car, ushatanny in the trash and unsuitable for further operation, that Anokhin spent 5.5 million rubles in two years.

Summing up all his expenses, the inspectors found that Anokhin spent more than 21.5 million rubles on his own pleasure in two years, while the former top manager spent over 1.3 million rubles on the purchase of expensive gifts by purchasing Apple phones and laptops that no one else had seen. Whether they were presented to someone and for what merits one can only guess. 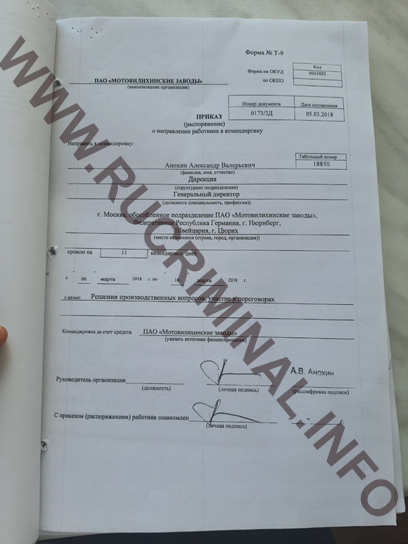 But this is not the only evidence of the rampant revelry of the former director of the Motovilikhinsky factories; the company’s overseas business trips were especially expensive. So, a business trip to Germany and Switzerland for a period of 11 days cost the company half a million rubles, and a business trip to Dubai for 7 days more than 800 thousand. One expense report was at the disposal of our editorial staff. We publish it. 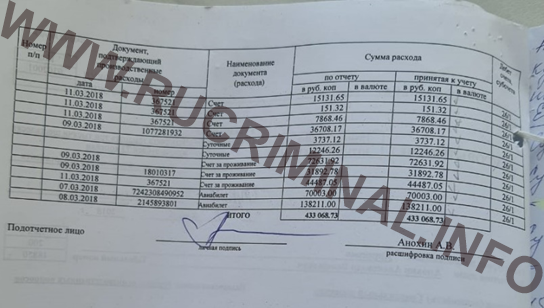 And all this at the expense of the budget of the company, which is in bankruptcy and has obligations to creditors. And such a case is not an isolated one. Taking advantage of the imperfection of the Russian legislation in the field of bankruptcy of enterprises in the Russian Federation, such CEOs can spend millions of rubles of state money with impunity on their private whims and increase their welfare, since they practically do not bear responsibility for anything, are not accountable to the advice of creditors and behave like actual owners of industrial enterprises, forgetting that here they were hired managers whose tasks include the rehabilitation of enterprises, and not their destruction.