Clients began to "hunt" for the lawyer Efremov

Elman Pashayev has dozens of victims 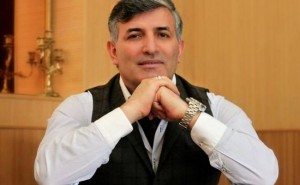 Clouds are gathering more and more over the head of the lawyer Mikhail Efremov Elman Pashayev. According to the telegram channel VChK-OGPU, the Moscow prosecutor's office found out that in recent years more than ten allegations of fraud have been filed against the defender. However, almost all of them were not given a "move". Only one victim managed to obtain the initiation of a division under article 159 of the Criminal Code of the Russian Federation (fraud) at the Arbat police station, but the investigation was suspended, allegedly due to the impossibility of identifying the person subject to prosecution. This is especially funny, given that there are no other defendants in the case besides Pashayev. In all cases, the story is the same. When meeting with a potential client, Pashayev promises to guarantee a suspended sentence and asks for his service from 2 million to 10 million rubles. It is especially worth making a reservation here that money is paid not for legal work, but for receiving a 100 percent suspended sentence with the help of Pashayev's connections. In all cases, clients received real terms, Pashaev did not return the money to them. 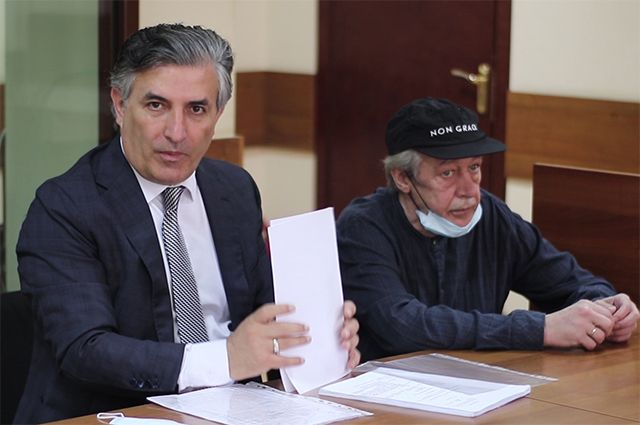 As Rucriminal.info found out, in the list of "100% promises from Pashaev" there are not only suspended terms, but also the initiation of a case in the interests of the client. This story was faced by a Muscovite Valentina Akhapkina, whose statement to the police was at the disposal of the editorial office. The woman had bad relations with her neighbors in the country, who literally terrorized her. Akhapkina turned to Pashayev for help, he gave a guarantee that he would sue the neighbors, achieve the demolition of their house and make sure that a criminal case was opened against them. For his services, Pashayev asked for 2.5 million rubles. Upon receipt of the money, he refused to issue a receipt. Then Pashayev took another 500 thousand rubles from the client for examination, allegedly necessary for a positive decision on the demolition of the building. Then Pashayev unexpectedly announced that he had failed to achieve anything and “washed his hands”. And Akhapkina found out that for her own money, Pashayev, having a power of attorney, simply withdrew all claims from the courts to her neighbors. There were no objective reasons for this. Akhapkina believes that the lawyer received money from her neighbors, after which he quietly terminated the courts. He did not return the money. In this connection, Akhapkina demands to initiate a criminal case against him.

Rucriminal.info continues to acquaint readers with the statement of another victim from Pashayev - the ex-head of the FMS department in the Yuzhnoye Butovo district Alexei Arsenovich. Pashayev guaranteed him a suspended sentence for 5 million rubles, but deceived him. Arsenovich got a real term.

“As it turned out later, Stepanov C.The. contacted Pashayev E.M.o. and entered into negotiations with him regarding the termination of the Agreement and the return of these money. As I learned:

Having phoned E.M. Pashaev by phone, announcing my desire to terminate the Agreement and receive funds in the amount of 5,000,000 rubles. (five million rubles) for failure to fulfill obligations Stepanov S.The. received from E.M. Pashaev. an invitation to a meeting at his office located at Moscow, Bolnichny per., 1, apt. 3. Later, all meetings with Pashayev took place at this address.

At the meeting, he demanded to bring a copy of the Agreement dated 03.02.2014 No. 045/14 and the Power of Attorney for the right to represent my interests in this case.

At the first meeting, E.M. Pashayev, after listening to Stepanov S.V. regarding non-fulfillment of obligations under the Agreement and the need to return funds in full, E.M. Pashaev. stated that the work had been done is the result of re-qualification of article 3 of article 290 of the Criminal Code of the Russian Federation to a softer composition of a criminal offense, liability for which is provided for in part 1 of article 286 of the Criminal Code of the Russian Federation and asked him to contact me to revise the amount, subject to return, which, taking into account the remuneration of E.M. Pashaev, according to his (Pashaev's) proposal, should have amounted to 3,000,000 rubles. E.M. Pashaev he himself offered to leave the amount to be refunded in the amount of 3,000,000 rubles, having coordinated this issue with me. Original Power of Attorney E.M. Pashaev left at home.

After discussing with me the proposed Pashaev E.M.o. amount to be refunded, Stepanov C.The. met with E.M. Pashayev again. at the specified office.

At this meeting Pashayev E.M.o. drew up with his own hand, and Stepanov S.V., at his direction signed, a document. According to Stepanov S.V. it was the Act of completed works indicating the termination of the Agreement, in which, at the end, Pashaev E.M.o. wrote with his own hand that the work under the Agreement had not been completed, and the money had not been returned. After these words, this document did not contain any other entries. On this document, below, S.V. Stepanov put his signature with a decryption. Other signatures Stepanov S.V. in this document did not.

This document was compiled by E.M. Pashayev. in one copy and its copy Pashaev E.M.o. Stepanov S.V. did not give. As Pashayev E.M.o. said, he needs it to provide the founders in support of the refund.

To which founders Pashaev E.M.o. was going to provide these documents and why, if he himself was the founder of LLC "Legal Center" MINARA, "neither me nor Stepanov S.The. not known. I believe that he introduced Stepanov S.V. misleading about their intentions to return the money, in order to obtain from Stepanov C.The. a sample of his signature as my attorney.

E.M. Pashaev told Stepanov S.V. that he would contact him as soon as he agreed with the founders and would be ready to return the money.

In mid-January Stepanov S.V. met with E.M. Pashayev again. in his office and Pashaev E.M.o. stated that the founders and his business partners refused to reimburse any money, referring to the fact that the services were rendered to me.

It is noteworthy that, according to S.V. Stepanov, at the end of his conversation with E.M. Pashaev. the latter suddenly announced that he was ready to pay Stepanov S.The. 100,000 RUB for the fact that he will give Pashaev E.M.o. original of the Agreement. At the same time, as Pashaev said, Stepanov S.The. will be "extreme" in the current situation, since I will blame S.V. Stepanov for the final result. in the non-return of this money.

Pashaev told Stepanov S.V. approximately the following: "... And you will earn money yourself and help me deal with Arsenovich."

Stepanov S.V. told me all this.

Since the money was not returned to me, I filed a statement of claim with the Butyrskiy District Court of Moscow to recover it from the MINARA Legal Center and E.M. Pashaeva.

During the consideration of this case, Pashaev E.M.about. presented to the court a written receipt dated 13.01.2015 g. (hereinafter - the Receipt) on behalf of Stepanov C.The. (a copy is attached), indicating the receipt of S.The. 5,000,000 rubles, which for me and Stepanov S.The. was a complete surprise.

In this Receipt, after the record that the work under the Agreement has not been completed, it is indicated that S.V. Stepanov received the money in the amount of 5,000,000 rubles, which Stepanov himself denies.

It is noteworthy that after these records of receipt of money there are three signatures that are similar to the signature of S.V. Stepanov, but which he denies, claiming that in this document, after the record that the work under the Agreement has not been performed nena, nothing else was written, he did not put his signatures there, but signed only in one place - at the bottom of the document with the decryption of his signature.

Thus, as I believe, the content of the document compiled by E.M. Pashaev and gave to sign to Stepanov S.V., it was changed - it was added (added) the phrase about receiving money and executed three signatures imitating the signature of Stepanov S.V. " 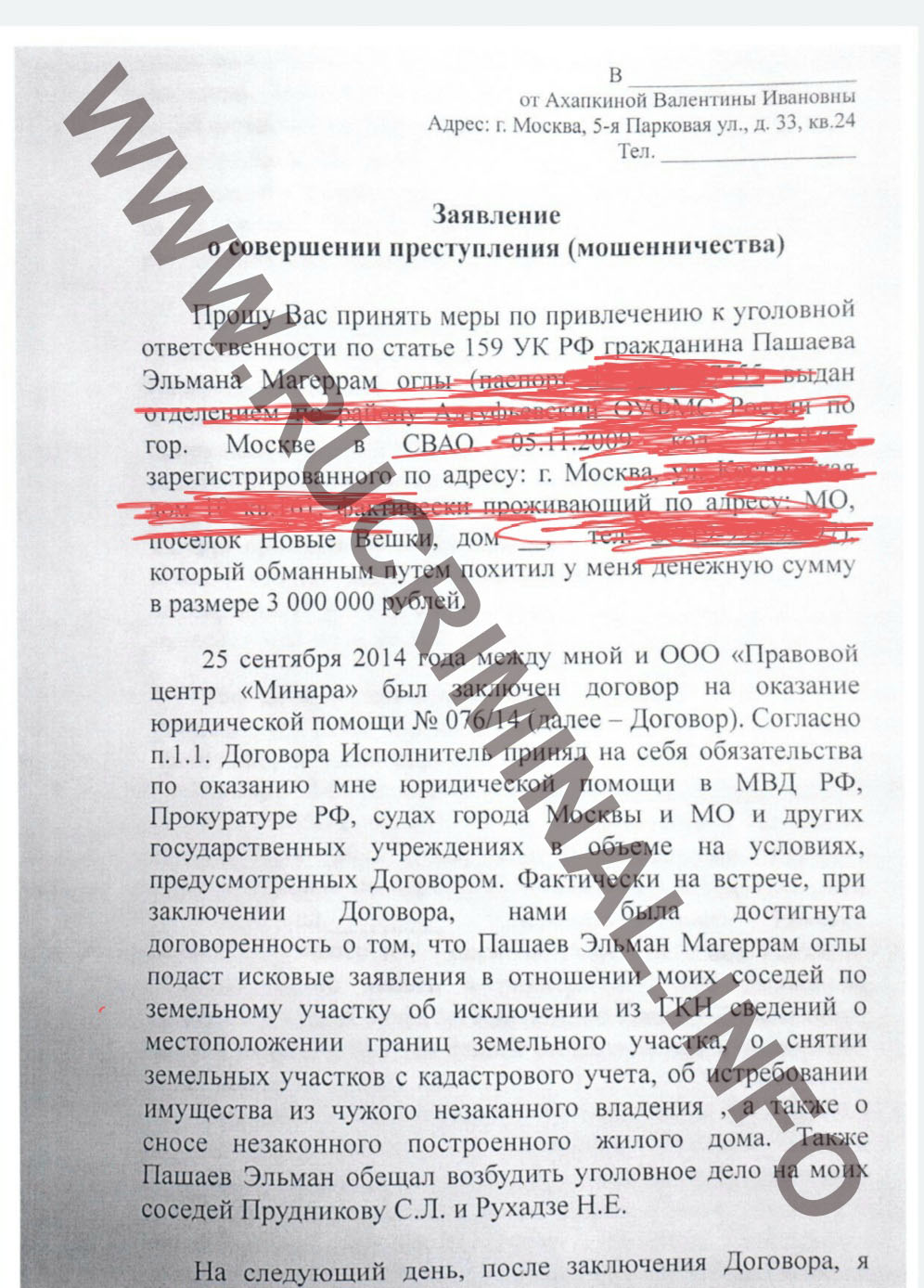 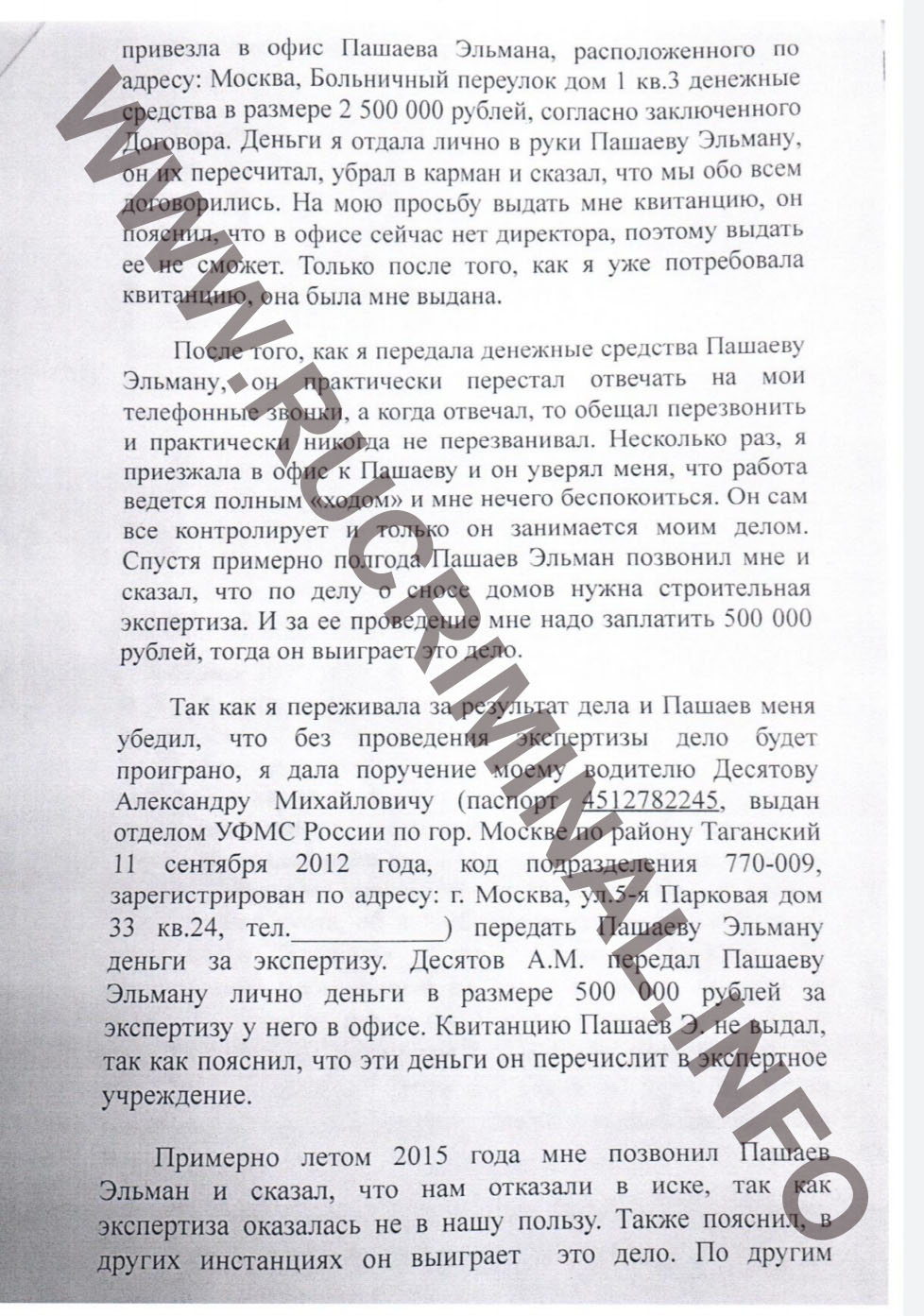 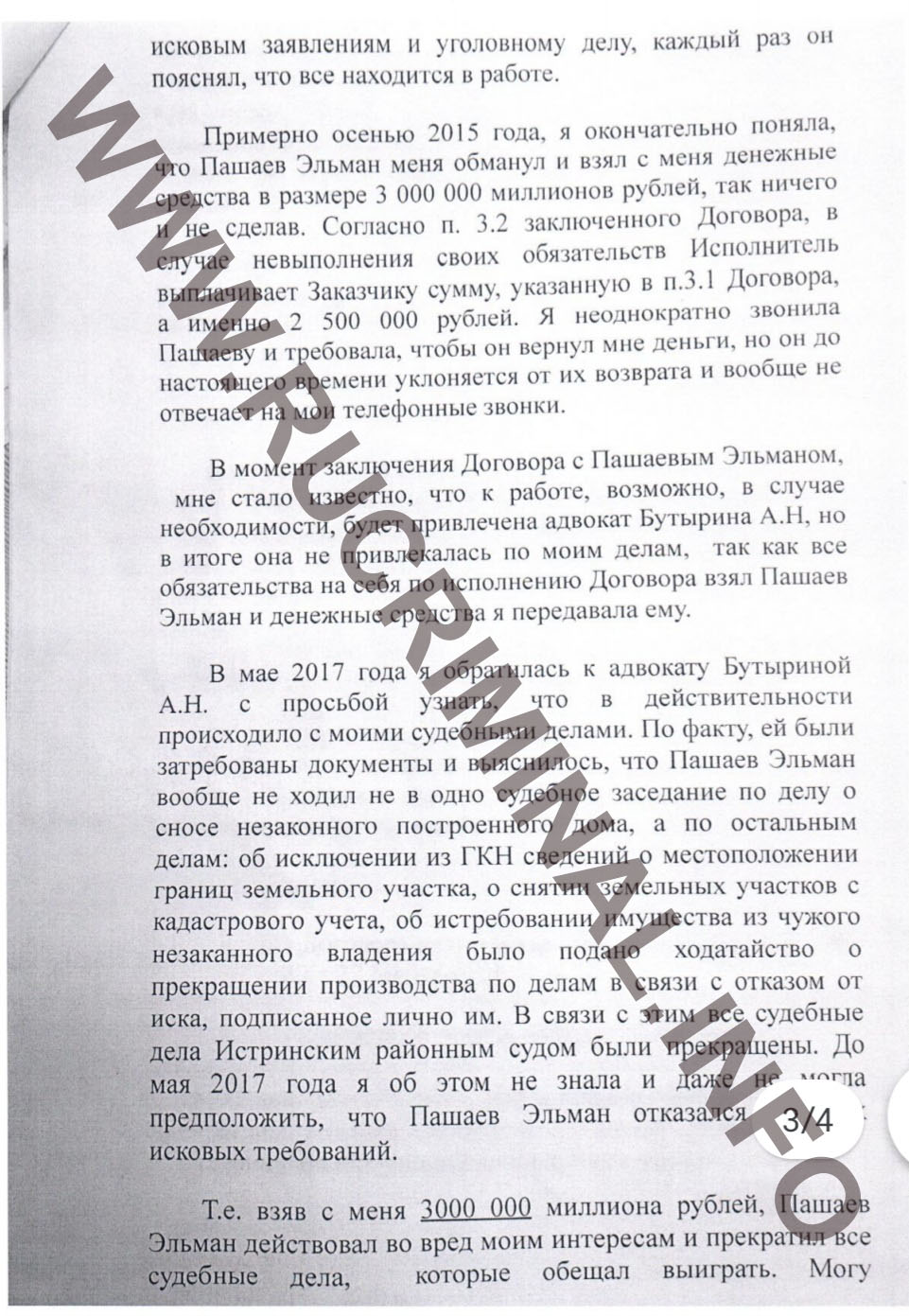 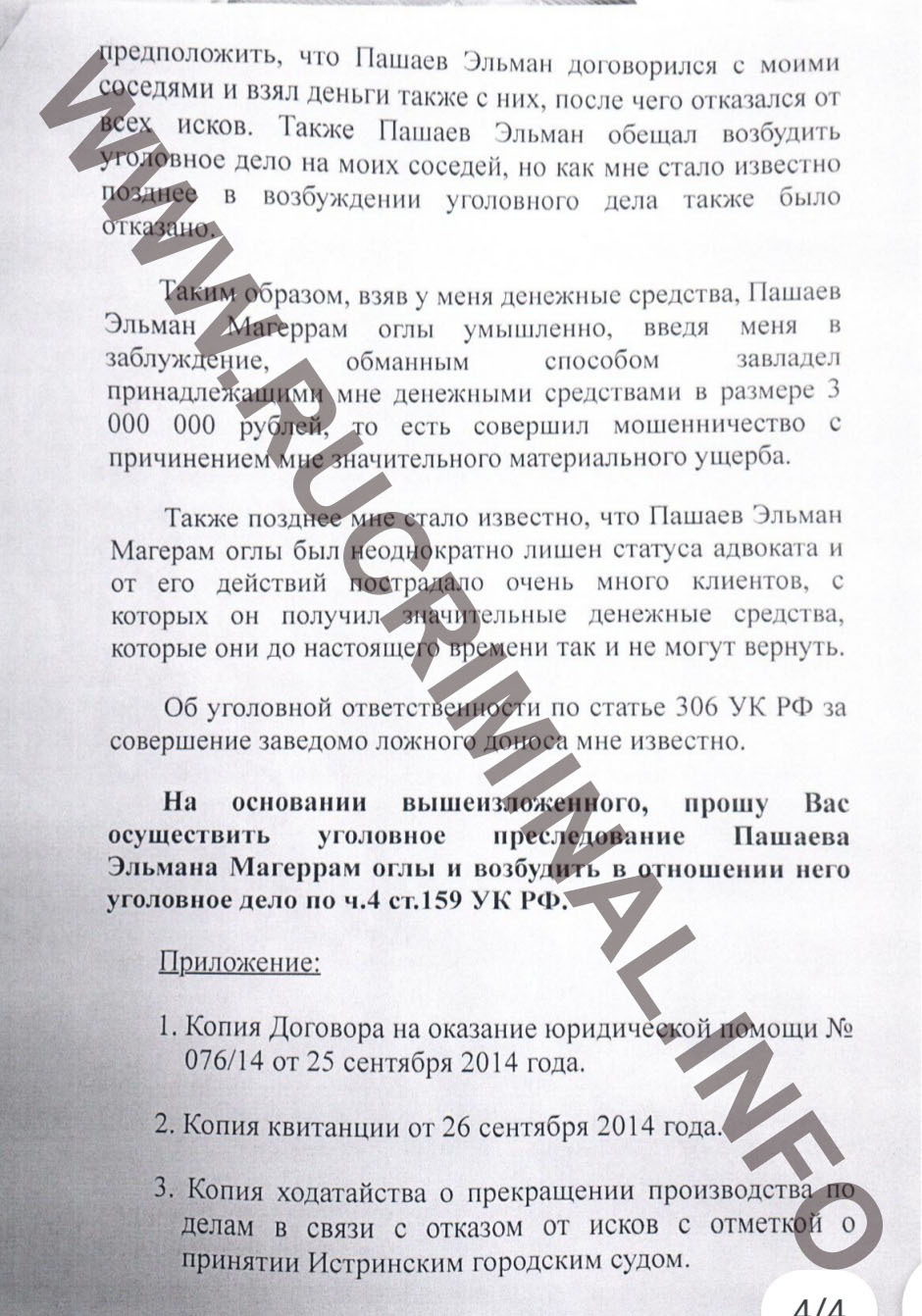