"Father" of the FSB is being driven to prostitutes 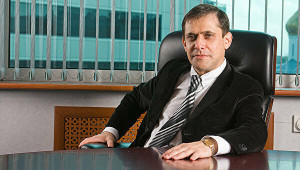 In the Tverskoy court, the hearings of the former owner of Fondservicebank (FSB) Alexander Volovnik are coming to an end. He is accused of creating an organized criminal group that stole more than 6.4 billion rubles from the bank. Investigators believe that Volovnik issued deliberately bad loans to firms, and the money was taken abroad. When the banker started having problems, he transferred many of his assets to his daughter Irina. However, he managed to "let go" and in 2021 the court declared her bankrupt. The Rucriminal.info source jokes that at such a pace, Volovnik, after his release, will have to return to where he started. And he began by buying up foreign exchange earnings from prostitutes. How Volovnik continued to build his career to Rucriminal.info, was told by banker Anna Etkina, who is familiar with Volovnik.

According to her version, in 1998 Volovnik played on the stock exchange until he made his first serious deal. Then one of the banks associated with Roscosmos collapsed. Then Volovnik began to buy up the bills of this bank on the cheap and presented them for payment to Roskosmos, which, unexpectedly, agreed to buy it out for as much as 100 million rubles. Part of this money went to the then head of Roscosmos, Yuri Koptev, and the remaining Volovnik was acquired by the FSB, which they tried to make the main bank for Roscosmos's settlements. But there was a problem - the FSB did not have a foreign exchange license and the necessary branches. The then chairman of the board, Tatyana Nikolaeva, opened a branch in Baikonur, managed to arrange for the bank to obtain a foreign exchange license, after which Roskosmos enterprises began to transfer to the FSB. Big money flowed to Volovnik, and he dreamed of a big "roof". A native of Tbilisi, Alexander Volovnik, all his life tried to appear as what he had never been. Volovnik was ready to pay fabulous money for all sorts of beautiful "crusts", license plates, etc. With all these attributes, as well as the abbreviated name of his bank, Volovnik in every possible way demonstrated his closeness to the FSB of the Russian Federation. However, Rucriminal.info sources say that all this is nothing more than a legend invented by Volovnik. In reality, Alexander did not have any permanent "roof" of the FSB of the Russian Federation and he was constantly looking for it. A Rucriminal.info source told how Volovnik handed over a successful company related to the space industry to Alexander Andreev and Maxim Kretov - businessmen closely associated with Marina Sechina, and all in order to talk about his closeness with the clan of the head of Rosneft (Marina is his ex-wife ). In Volovnik's business card holder was Marina Sechina's business card, which he often showed to his friends. Business cards of "people of influence" were Volovnik's passion; he laid them all out on the desktop and literally admired them.

And in 2013, fate did not bring Volovnik to Valentin Gonastarev. As Rucriminal.info already told, in the 90s, Gonastarev worked in the law enforcement agencies of St. Petersburg and provided assistance through his own line to a number of novice small businessmen, in particular Boris Rotenberg. I went with them, as well as with novice St. Petersburg officials, other security officials to the bathhouse. Then these "small businessmen" turned into billionaires, the officials moved to Moscow, and the siloviki, who received responsible posts, also moved there. So, Viktor Voronin became the head of Department K, after which the welfare of Gonastarev began to grow sharply. How this happened can be seen in the example of Volovnik.

Gonastarev promised that he would make all of Alexander's dreams come true: he will finally have a mega-roof of the FSB of the Russian Federation. Then the usual meetings began at the Savoy Hotel, where Gonastarev in every possible way demonstrated to Volovnik the power of his friends and made it clear that he was ready to share it. The conditions were also voiced - 1 million dollars in cash for getting to know the "almighty roof" and then, after getting to know each other, over $ 10 million must be paid. This, so to speak, is for general patronage.

Volovnik agreed. Moreover, he did it with joy, expecting that his dream would come true. Indeed, Gonastarev soon introduced Volovnik to Voronin and Dmitry Frolov at the Savoy. He was promised that from now on this is his "roof".

And then it was time to pay off. Volovnik apologized and said that he would not be able to pull out more than $ 10 million in cash and asked to arrange everything as a loan for the corresponding amount in rubles. It is clear that there was no need to repay the loans, and they were arranged in such a way that the return was not particularly foreseen. As a result, loans were issued to companies controlled by Gonastarev, including Nova Development LLC. The corresponding document is published by Rucriminal.info.

Having obtained such a "roof", Volovnik began to withdraw money en masse from Fondservicebank, whose main client for a long time was "Roskosmos". In total, according to the Ministry of Internal Affairs of the Russian Federation, over 7.5 billion rubles were stolen.