Ministry of Internal Affairs forgave Tyurik for the title of thieves 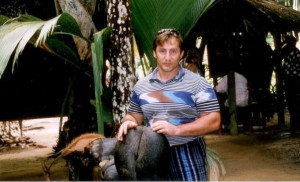 The Main Investigation Directorate of the Main Directorate of the Ministry of Internal Affairs of Russia in Moscow issued a refusal decision on the application of the opera singer Maria Maksakova in relation to the father of her two children, thief in law Vladimir Tyurin (Tyurik). According to the telegram channel VChK-OGPU, investigator Elvira Mamadalieva did not find grounds for initiating a criminal case under article 210.1 of the Criminal Code of the Russian Federation (the highest position in the criminal hierarchy). Everything rests on the fact that Tyurin did not appear for additional questioning by Mamadalieva herself, who considered the explanations received by the Moscow Criminal Investigation Department as of poor quality. However, there is nothing surprising - the Ministry of Internal Affairs has historically sympathized with the thieves in law. As it became known to Rucriminal.info, opera singer Maria Maksakova complained to Prosecutor General Igor Krasnov about the refusal decision issued by the Main Investigation Department of the Main Directorate of the Ministry of Internal Affairs of Russia in Moscow in relation to Vladimir Tyurin. The mood of the ex-deputy, apparently, is very decisive. She is very persistent and consistent in translating the situation into a public plane.

Attention should be paid to the arguments of the investigator of the State Investigation Department Mamadalieva, who refused to initiate a case: allegedly there is no structure 210.1 of the Criminal Code of the Russian Federation, because the norm was introduced in 2019, after which Tyurik's actions did not confirm his status as a thief in law. This is a precedent that threatens to form the practice of "forgiving" any "old regime" authorities. And at the same time to open another loophole for the earnings of various fixers from the Ministry of Internal Affairs.

Vladimir Tyurin himself should pay attention to the fact that Maria Maksakova hits the most urgent point, demanding to initiate a case under Article 159 of the Criminal Code. Here we are obviously talking about the theft of shares in a company that owns a mansion on Podkopaevsky lane in Moscow.

Vershinin was earlier an assistant to Maksakova in the State Duma, that is, he had a limit of trust. Tyurik offered the singer to sell him 75% in ILM AG JSC (inheritance after the death of Maksakova's father), which owned an office with an area of ​​950 square meters in 9/2 Podkopaevsky Lane. The share was estimated at 1,000,000 euros. Under the contract of 17.527 euros. The deal was executed by the lawyer Vershinin, for which he flew to Riga, where Maksakova was giving a concert. As usual in the underworld, life is bad without a sucker - the seller did not see real money. Considering that the scheme was cranked by lawyer Alexander Vershinin, who recently received a conviction for the divorce of thief in law Vasily Khristoforov (Vasya Voskres), a new term for fraud may prevent him from claiming parole.

At the disposal of Rucriminal.info was Maksakova's appeal to the Prosecutor General, which we publish: According to the resolution, V.A. Tyurin was again summoned to the Main Investigation Department of the Ministry of Internal Affairs of the Russian Federation in Moscow, but the latter did not appear. Investigator Mamadalieva E.R. indicates that since Art. 210.1 of the Criminal Code of the Russian Federation was introduced in April 2019, then the circumstances indicating the manifestation of V.A. themselves as a person occupying the highest position in the criminal hierarchy, operational officers were not obtained.

In my explanation, information about the crossing of the Russian border by V.A. Tyurin was indicated. on forged documents, participation in banking crimes on the territory of the Russian Federation and Europe. No information was requested from Spain, where V.A. is wanted. Also, no check was carried out regarding the illegal acquisition of Russian citizenship.

During the verification of the material (KUSP No. 39269 of 05/18/2021), at the request of the operational staff, I submitted another application (KUSP No. 45977 of 06/04/2021). This statement contains a request to check the actions of V.A. Tyurin, R. Karpov, A. Vershinin, L. Fedorchenko for the purpose of committing a crime under Art. 159 of the Criminal Code of the Russian Federation. However, this statement was sent to the Ministry of Internal Affairs in the Central Administrative District of Moscow, thus an attempt to obscure this material is visible. I believe that the above information should be checked within the same material, since the same persons appear in these statements. Based on the decision to refuse to initiate a criminal case, there is an unsatisfactory work of the operational staff who, with a limited amount of time, did not conduct a comprehensive check. Based on the above, I ask you to take personal control of the verification of the materials. "