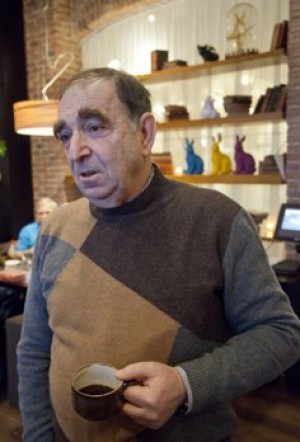 A month ago, the bank "Our House" solemnly announced that he was connected to the service "Golden Crown", through which his clients can make instant money transfers. It is unlikely that this news greatly pleased the depositors of the bank, many of whom already had the pleasure of "transferring" their funds in an unknown direction through the bank "Our Home". The transfer of other people's cash into their own pockets was successfully handled by the former chairman of the JSC AKB "Our Home" Lev Granovsky - previously a very respected banker, a well-known photographer and even a member of the board of trustees of Moscow State University. Small investors Lev Borisovich was not engaged, he worked only with VIP-clients, taking them personally in his office. Obviously, wanting to save important people from the hassle of making a deposit, he himself took money from them, issuing a receipt for their receipt. Clients got rid of the bureaucratic fuss with the papers, and Granovsky left taxes, illegally replenishing bank assets. However, after a while it turned out that not all the money was in the bank's cash department, they often "left" in an unknown direction, known only to Lev Granovsky.

When the machinations were revealed, Lev Borisovich "unexpectedly" disappeared. His wife even filed an application to the police, which then for some reason took back. All this happened in March 2016. Bank "Our Home" made a good face in a bad game, saying that Chairman Granovsky is on a regular vacation and improves his health somewhere in France. After that, Lev Borisovich did not appear in Russia, quietly resigning from the bank on April 1, 2016. Deceived depositors rushed to "Our Home" to help out their deposits, and were terribly surprised when the bank refused to issue money on receipts issued by a private person, who was Lev Borisovich Granovsky. People were shaking, and the bank fevered-over the past year the volume of corporate funds in the bank decreased by 91.6% or 997.7 million rubles, private deposits - by 39.8% or by 603.7 million rubles. Individuals and legal entities hurried to withdraw their money, fearing that the bank would be deprived of the license, and the DIA (Deposit Insurance Agency) would not be able to cover all losses. But the bank resisted, although by the efforts of Granovsky lost his "good" name. At the end of last year, "Our Home" occupied 444th place in the Russian banking system with assets of about 2 billion rubles.

To people who were so unpretentiously "thrown" in his office by Lev Borisovich Granovsky, it remained only to go to court and present the receipts received from him. To date, part of the claim for debt collection from the banker Granovsky is satisfied, and some are under consideration. The total amount of claims so far is difficult to establish, but according to law enforcement agencies, it ranges from 20 to 50 million dollars. Money to the cunning banker who promised high interest on deposits, brought a variety of people: well-known in the capital's business circles people, criminal authorities and even single mothers who gave last savings. Among deceived creditors there are law enforcement officers, including colleagues of the "golden" Colonel Zakharchenko.

On November 7, 2016, the Moscow Arbitration Court found the ex-chairman of JSCB "Our Home" Lev Granovsky bankrupt. The application for bankruptcy was filed by Denis Sklyarov, who "invested" 25 million rubles in Granovsky's pocket, which was confirmed by the Nikulinsky court in Moscow. It follows from his decision that the former head of "Our Home" has debts to three more individuals and two banks, one of which is his former place of work. The Moscow Arbitration introduced against Granovsky the procedure for selling the debtor's property for a period of six months. Lawyers see in Granovsky's activity a whole bunch of crimes: signs of fictitious bankruptcy, fraud, illegal banking activities and concealment of assets from creditors. They also suspect that the former banker secretly owned a controlling stake in the bank "Our Home", although according to the documents Granovsky only headed the bank, owning only 8% of the shares of the financial institution. The remaining shares were issued for his two deputies and chief accountant, who after the scandal with deception of investors from these shares. Now the bank is owned by people who are supposedly not connected with Granovsky. But, if you carefully examine the register of shares of this bank, you can understand that the shares are moved only among a limited number of persons who are obviously interested in maintaining the integrity of this asset. It turns out that you can easily remove one shareholder, declare it bankrupt, while keeping the bank in the right hands.

Customers are little concerned about the change of the owner of the bank, they are concerned - where the money was stolen and whether it is possible to return them. This is a very interesting question, considering that the bank's own capital is several times less than the claims of creditors to the banker. One thing is clear - the money of depositors passed by the bank's cash desk. It turns out that the bank was only a "cover" for Granovsky, who accepted the clients' funds for his personal purposes. According to the former employees of the bank, the chairman of the board could invest this money in the mining projects of his son Boris, the Canadian Silver Bear Resourses, one of whose projects is the development of the Mangasei silver deposit in Yakutia. Also, there is an opinion that Granovsky used the stolen funds for joint projects with former high-ranking official Danilov-Danilyan. Now this is no longer important, since the runaway banker Granovsky is declared bankrupt and the bailiffs unsuccessfully try to find his property. Unfortunately, in Russia, law enforcement practice on the deliberate or fictitious bankruptcy of individuals is not yet available due to the novelty of the procedure for the bankruptcy of individuals. One can only guess whether the court will be able to find and arrest any property of Granovsky comparable to its debt obligations. But for this it would be good to first detain the culprit of the scandal and interrogate "with a passion".