Who committed the undisclosed carnage 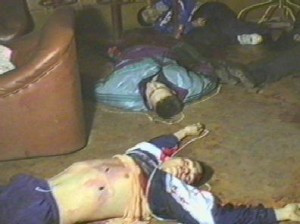 Closer to midnight on November 25, 1993, three submachine gunners in camouflage uniforms and masks entered the club of the Ryazselmash plant, where the leaders of the Ayrapetovskaya organized criminal group were waiting for a meeting of the leaders of the elephant organized criminal group, and opened fire in the bar. Some of those present managed to turn the tables over and hide. The riflemen had handicraft assault rifles from parts stolen from Tula factories, and the cartridges were not ordinary for mufflers, so the barrels got hot and just spat bullets that bounced off the countertops. There could have been more corpses, but one of the machine gunners was wounded. According to the official version, Andrey Podlinny hit him with a pistol. According to an unofficial version, Viktor Airapetov himself shot back - in the official position of director of television programs of the ARS company on Ostankino and a personal friend of composer Igor Krutoy and singer Alexei Glyzin, who in the 80s was a frequent visitor to Ryazan and sang drunken songs with a guitar on Pochtovaya Street (in Soviet times, Podbelsky) in the legendary "Ayrapetovsky" bar "Vecherny" (now ThePeashem), which the future head of the "Laskovy May" group Andrei Razin began to build in 1987 and then sold vodka there.

According to one of the leaders of the Ryazan Organized Crime Control Department, Alexander Susarin (for many years, the confidant of the head of the Ryazan Organized Crime Control Department, now the head of the Main Directorate of the Internal Affairs Directorate of the Ministry of Internal Affairs Alexander Makarov), the crime was solved by him, the customers and executors were identified, a detailed certificate was drawn up on 7 pages, but on the advice of the head of the regional militia of Vladimir Palchenkov, it was destroyed.

Accordingly, thanks to the support of a personal friend of the head of the Security Council of the President, Alexander Korzhakov (in the book "Boris Yeltsin: From Dawn to Dusk" - a general photograph with a handshake) of the former paratrooper, vodka smuggler of the mayor of Ryazan, Valery Ryumin, the elephant organized criminal group gained full control over Ryazan. Previously convicted Oleg Sevryugin, nicknamed Yashka (junior), became an assistant to the State Duma deputy from the Liberal Democratic Party of Russia Alexander Filatov with certificate number 4039 (based on the book of Andrei Konstantinov "Gangster Petersburg 20 years later"), the author of books on local history "I'll show you Kadom", "In Silver Field "," Zapovednoye "and a deputy of the Ryazan Oblast Duma, in which he was replaced by friends in a bloody biography, the repeatedly convicted Alexei Kirilin, now Kirillo-Pokrovsky (Ochkarik, Astronomer, Pontus, Emigrant) and Alexander Glazunov (Glaz).

Father Alexander Sevryugin lectured at the school of the Ministry of Internal Affairs and was friends with the head of the regional police Ivan Perov, who constantly prevented Alexander Makarov from fighting the organized crime group. With the beginning of the investigation after the 11th volume of the criminal case on the Slonovskaya organized criminal group, the names of all the main leaders disappear from the case materials: Oleg and Sergei Sevryugin, Alexey Kirilin, Alexander Glazunov, Sergei Sapfirov (Tooth), Sergei Kotov (Cat), Vladimir Talalaev (Talalay), and it turns out that Andrei Mokhov (Mokh) and Vitaly Akhmetov (Akhmet) met by chance in the house of the killer's uncle Leonid Stepakhov (Bubble), previously convicted Viktor Gromov (also Bubble) and decided to go and shoot Togliatti authorities on their own.

Vyacheslav Ermolov (Elephant) freely visits Ryazan on military aircraft through the Diaghilev airfield, being on a long-asleep wanted list and several years ago tried to legalize himself through his lawyers, who asked the regional court for access to the materials of the criminal case on the Elephant organized criminal group, since there is not a single piece of evidence there. that he was the leader of the gang, for which special thanks to Ivan Perov.

The lawyers were unlawfully denied access, otherwise the meeting with the hometown of the famous fugitive could overshadow the return of Alexander Solzhenitsyn.

Lunatics (sleepwalking), drug addicts, alcoholics were convicted in the elephant case. The episode with the shooting of the Ryazselmash disco was not included in the verdict.

Oleg Sevryugin, witness number 1 on the prosecution list, was not even summoned to court. The official reasons are unknown. The investigation into the shooting of the Ryazselmash disco was resumed when Yury Kupriyanov (Cooper, Nero), twice convicted, gave an interview to blogger Andrei Karaulov about the leadership of the Ministry of Internal Affairs in May 2020, after which he began to urgently sell his assets and fled to Belarus. For a year, the renewed investigation was able to establish DNA from machine guns - there was no such possibility 30 years ago, and also to determine in the same way who drank from a glass in the bar, when in front of the arrow between the "Ayrapetovskaya" and "Slonovskaya" organized criminal groups came to the disco to check the presence there Viktor Airapetov himself, who was the new target of the attack. The corpse of a wounded submachine gunner, who was then finished off with a shot in the stomach from a sawn-off shotgun, was discovered in the summer of 1994 in the sewer manhole of a ravine near the disco building. The Tula gunsmith Albert Alesov, who sold to Oleg Sevryugin the assault rifles assembled from his stolen parts, was detained in another case as part of an organized group, served an impressive term, but, oddly enough, is still alive and has not been eliminated. In 2010, during the trial in the regional court over the Osokinskaya organized criminal group, the driver of the late leader, boxer Roman Romanek (formerly Denisov), testified with reference to Alexander Osokin that one of the submachine gunners was the shared Osokinskaya OPG Dmitry Lukin, nicknamed Lukich, a hockey friend of Aleksey's brothers and Pavel Ksenofontovs from the garden of the owner of the Ryazan brewery Alexei Kirilin. During this trial, Dmitry Lukin, when asked for what merits he became a shareholder, replied that he simply grew up in the same yard with the founder of the Osokin organized criminal group Dmitry Golovanov (Golovan).