"The guards could have been shut down along with the main goal." 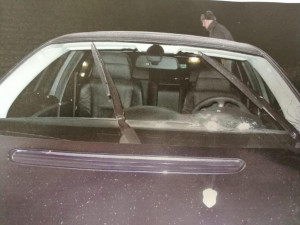 The famous Krasnoyarsk journalist Aleksey Tarasov, who made great efforts as an investigative author of the criminal activities of Anatoly Bykov, far-sightedly and aptly compared him with the Minotaur. There is only one essential difference with the ancient Greek monster. If the Minotaur watched his victims in the intricacies of the labyrinth, then Bykov himself lured people into secret passages and bloody dead ends of his paranoid thoughts, passing death sentences and those who disagree to bow their heads to businessmen and yesterday's friends. This cup also did not pass by Andrey Grabovsky, Bykov's close associate. Details in the investigation by Rucriminal.info.

Grabowski (Coffin) appeared in Bykov's orbit for a long time, they studied together on physical transport and were engaged in boxing in the 80s. However, the rapprochement took place already in the 2000s, when Bykov, who had already sat down instead of cold prison bunks in the chair of a deputy of the Legislative Assembly, was unable to engage in crime on the ground. He, who for a long time completely subjugated the Central Market of Krasnoyarsk and previously held Aktay and Struganov there by his protégés, charged Grabovsky, who had never before been convicted, to control not only this commercial site, but, in principle, all issues of the so-called “street” in Krasnoyarsk. In the regional center, those people passed through Grabowski, those situations and those problems that the newly-minted politician Bykov was no longer able to personally solve according to his status.

Grabovsky drove to the Bykovsky house on Ovinka, at the suggestion of a reputable businessman, he became vice-president of the Boxing Federation in the Krasnoyarsk Territory. Then, collection of donations from businessmen for various sports tournaments was added to its functionality.

But friendly relations, student memories and the status of "right hand" in Bykov's entourage could not save anyone from a sudden change in the mood of authority. To Grabowski Bykov cooled sharply. Moreover, this cooling did not have to be really good reasons. Bykov, from whose inner circle for the period of the 90s only a few remained alive at that time, he himself was completing the schemes of possible betrayal in his mind.

According to a Rucriminal.info source, for Grabovsky, the final chord of Bykov's death sentence was a trip to Moscow that was not coordinated with the criminal authority. There, as Petrovich was told later, he met with people from the environment of a Moscow businessman named Pestov. Bykov had a tense attitude towards Pestov for some personal reasons, about which he is still silent. The coffin, being surrounded by a conditional "enemy", became splendid and secured the status of a traitor. Later in 2009, Bykov will, during interrogations in the Nazarov murder, pass off his disappointment in Grabowski as a clear strategy. Allegedly, Petrovich had seen Judas sent by the enemies in the Tomb in advance, but he specially brought him closer in order to follow and patiently wait for the fears to be confirmed.

The last pieces of the chthonic mosaic in Petrovich's head were formed when one of his security guards said that Grabovsky supposedly prepared a sniper's bed on an island not far from Bykov's residence, from which all the authority's possessions were perfectly visible. Grabovsky, having played his role in Bykov's entourage, essentially repeated the path of Vilor of Struganov's "Color Music", who was also sentenced to death by Bykov and for organizing the attempt on whom Bykov was sentenced to 6 years probation.

Soak the coffin was entrusted to a native of the Struganov group, Alexander Zhivitsa, nicknamed Bul. The latter already had an order in development from Bykov for the entrepreneur Nekolov, one of the rare characters who refused to bow his head in front of the gangster king and, moreover, was engaged in business in a field adjacent to Bykov's interests. Nekolov also aroused Bykov's indignation by the fact that the previously mentioned Muscovite Pestov provided him with help in business. We will definitely tell you about this order in the next episode.

The urgency of the order for Grabowski added almost six months to Nekolov's life. For the wet case, Zhivice was promised a solid jackpot in the amount of 50 thousand dollars. The killer hoped to overwhelm Grabowski when he once again returned with security to the country cottage on Ovinka delegated by Bykov. Grabowski never drove alone; his BMW always had at least one person from his bodyguard. This, however, did not constitute a big problem for Zhivitsa - the security could be shut down for the company with the main purpose.

There was only one problem - the killer could not cope alone. One shoots, the other steers - he established such a distribution of duties, calling on his sidekick in the Struganov group, Alexander Yatsenko, nicknamed Dupre.

Having prepared a Niva car for contract murder and armed with a Kalashnikov assault rifle, Boulle and Dupre on November 1, 2004, in the vicinity of Ovinka, began to guard Grabowski's BMW. And everything, it would seem, should have worked out in favor of Zhivitsa, but luck smiled at the victim. Killer He fired at least 7 shots at the BMW, but the bullets flew from Grabowski past, as if from a conspiracy. The "Boomer's" had bullet holes pierced through the windshield, hood, front panel, but not a single bullet hit either Grabovsky or his guard. Yesterday's Bykovskiy's attendant turned the steering wheel abruptly and drove the BMW down the mountain, escaping the shelling. After that, the driver and passenger disappeared from the car and began to go even lower to the houses, leaving the killers with nothing. Boulle and Dupre, fearing that the police would soon come to the noise, retreated. Here, if life were a computer game "GTA", the screen would flash that "MISSION Failed". Grabowski then, immediately after the assassination attempt, desperately sought a meeting with Bykov, but the authoritative deputy refused yesterday's "right hand" the right to visit, thereby only confirming that the order was entirely his creature. Excommunicated from the Bykovsky court, the Coffin hastily hid in Moscow, where he eked out an inconspicuous and even miserable existence for yesterday's market tycoon. True, before leaving, he managed to prove that the work for Bykov did not pass without a trace for him and clearly influenced the way of thinking. In the same November 2004, he himself ordered the killer Koval to murder the former deputy head of the murder department of the regional police department, Sergei Nazarov. The difference between the attempt on the life of Grabowski himself and the crime he planned, which was crowned with success, is three weeks. The evidence base in order to close the Coffin for this major atrocity was collected by law enforcement officers only 14 years later, when he himself was in the dock in this case. Only Bykov himself can know about the rest of Grabovsky's sins, but he is silent for now.

By the way, Grabowski never gained a criminal authority - he went to the colony for this business as a “first move”. As you can see for yourself, people from Bykov's entourage, if they did not disappear without a trace, then morally rotted, adopting from the "godfather" revenge, paranoia and a craving for murder by someone else's hands.

Today, when Bul, Tatarenkov and Struganov and other Bykov's fighters testify and are not afraid to tell the truth, law enforcement officers can form a solid evidence base for all of Anatoly Bykov's activities. In which there are still white spots, but even if you look closely, they will most likely be covered with blood. One thing is clear - Bykov will finally have to answer according to the law for this and other contract killings. The materials of the criminal case will soon be sent for judicial consideration.