There is a hunt for "criminal generals" 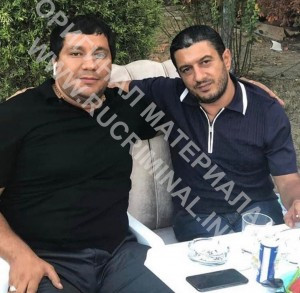 In the Turkish city of Mersin, an attempt was made on the thief in law Rafik Eyvazov (Rafik Massalinsky). He was hospitalized with four bullet wounds. Sources of the VChK-OGPU telegram channel and Rucriminal.info said that the crime boss Namik Salifov and his “right hand” Polad were behind the attack. They are very successful in hunting down everyone who was involved in the murder of Nadir Salifov (Lotu Guli).

Eyvazov knew that he was being hunted, and chose asylum in Turkey. It is located in coastal Mersin, which is extremely far from Istanbul and Antalya, but close to the border with Syria. Rafik tried not to advertise the place of his stay, only a few knew about him. Despite this, they figured him out and tried to kill him.

Sources connect the incident with the "Azerbaijani" "star" entering the sky. This is the second cousin of thief in law Nadir Salifov (Lotu Guli) Polad (Folad) Omarov. As reported by the Cheka-OGPU, during the life of Guli, he was not part of the inner circle of the lawyer, but after his murder he became extremely close to Guli's brother, also a thief in law Namik. In particular, Polad promised to deal with everyone who was involved in the massacre of Guli. It is he who is now taking over the organization of the execution in December 2021 in Odessa of Nazir Aliyev. The latter was close to Guli and actually served as the head of his security service. Before the attack on Salifov, he arranged everything in such a way that the chief was actually without numerous guards. Later it turned out that Aliyev was instructing the perpetrator of the murder, Lot Guli. After the crime, he hid in Odessa, where, on the instructions of Polad, he was found by Guli's former bodyguard Shokhraddin Guliyev. He was detained at the scene of Aliyev's murder and takes all the blame.

The biography of Polad Omarov is appropriate. As the VChK-OGPU found out, Omarov was put on the international wanted list by Ukraine for the kidnappings and murders of two people. And this is not the whole list of his Ukrainian victims. He was also put on the international wanted list by Kazakhstan for kidnapping and murder. He was also put on the wanted list for kidnapping and the creation of a criminal syndicate by the Czech Republic and Bulgaria. But Polad Omarov does not lose heart, he expects to become a thief in law and names a huge list of people, including thieves in law, whom he intends to kill. Just the other day, he announced a reward of 3 mln dollars for the shooting of the brothers of the late crime boss Rovshan Dzhaniev (Roshan Lenkoransky). In general, mostly his potential victims are those who at different times said something bad about Guli, well, or simply do not like Polad. In the Salif clan, Polad is considered a very effective boss who works exactly in the style of Guli himself. Now Polad is trying through proxies to take control of the business of selling flowers and greenery in the Moscow region. Moreover, he began to impose tribute on Azerbaijani merchants in the large markets of Moscow, including Food City. Attempts to intervene on the part of thief in law Vagif Suleymanov, to put it mildly, did not find understanding with Polad.

Lotu Guli was shot in Turkey in August 2020 by a bribed person from Salifov's entourage. Customers gradually became known and there are three of them. These are thieves in law Heydar Aliyev, Rafik Eyvazov (Rafik Massalinsky) and authoritative businessman Zaur Akhmedov. They all had reasons to hate Guli and each made an effort to ensure that he was gone. Aliyev and Salifov were old enemies. Guli's people cut off Rafik's ear. Akhmedov's brother, thief in law Rovshan Dzhaniev, was killed. It is believed that this happened at the go-ahead of Loto Guli.

Albert Ryzhiy belonged to the clan of the once thief in law No. 1 Aslan Usoyan (Ded Khasan). The war between Nadir Salifov and Ali Heydarov began at the end of 2013. Lotu Guli announced his claims to a number of markets controlled at that time by Albert Arkhangelsky Ryzhy. However, Ali Heydarov refused to share profitable objects. Several unpleasant telephone conversations took place between the thieves in law, ending in a serious conflict.

On March 17, 2014, employees of the Main Directorate of Criminal Investigation of the Ministry of Internal Affairs of the Russian Federation detained two killers with weapons in St. Petersburg, who, as it turned out, had arrived in the northern capital to eliminate Ali Heydarov. During the investigation, it was established that the mercenaries were sent by the “right hand” of Lot Guli, Ilgam Hajiyev. In early April 2014, operatives detained him in Moscow, and they had to use weapons. As a result, the "authority" was injured.

In 2016, Heydarov was arrested for robbery and later sentenced in St. Petersburg to seven years. In the summer of 2020, Albert Ryzhiy was released on parole.

At the end of January 2021, Heydarov celebrated his 40th birthday on a grand scale. According to the documents, he was born on February 2, but in reality this event happened earlier. On the occasion of such a significant event, Albert gathered a lot of honored guests at a restaurant in Moscow. And in the midst of the fun, special forces soldiers in full uniform burst into the premises. A common thing for banquets (in the official language of "gatherings") of "lawyers". Separate sob fighters were already about to lie down on the floor and put their hands behind their heads. The spetsnaz behaved uncharacteristically. They went to the table of the hero of the day and fell on their knees in front of him, apologizing. It turned out that it was a cheerful gift from one of the guests with mummers. The hero of the day was very pleased.

Heydar Aliyev was shot dead on April 12, 2021 in the fitness center of the Scarlet Sails residential complex in Moscow. Arrested immediately after the execution of Aliyev, the performer Matlab Sultanov said during interrogations that the decision to deal with the thief in law was his personal, because of some offensive words. The operatives, of course, did not believe it. And not in vain.

As the source of Rucriminal.info told, then the kid went around the pre-trial detention center, the meaning of which was that it was necessary to deal with Sultanov, as with the killer of a thief in law. For security reasons, he was transferred to Matrosskaya Tishina, even kept alone in a cell. However, it is clear that it will not be possible to protect Sultanov forever. But he had an intercessor. The detectives established that thief in law Namik Salifov (Guli's brother) repeatedly called the pre-trial detention center, who persistently asked influential inmates not to do anything against Sultanov.

Having brought the information, the operatives found out that Namik was already a special person and did not hide among those close to him that the elimination of Aliyev was the work of “his hands” and this was revenge for his brother.