The wife of the head of Rostec begged him not to tell him that built the house, uninhabitable 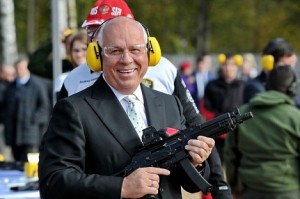 The sites for the sale of the VIP-property for several months, you can see an advertisement for the sale of a 4-storey house in the suburban village of Zhukovka very immodest sum of 1.9 billion rubles. Those who prefer to pay currency can pay for a house for $ 30 million. Sellers estates are not specified, but they are known. This chapter "Rostec" Sergey Chemezov and his wife Ekaterina Ignatova. However, we expect that there will be buyers do not have to. And it is not in crisis. Chemezov and Ignatov managed otgrohat for a huge sum, perhaps, the most expensive in the world wreck. Correspondents Rucriminal.com learned the details of the construction of this object.

Ekaterina Ignatova has positioned itself as a very successful businesswoman. However, all her achievements in business and banking occurred after a rapprochement with Sergei Chemezov. But that, as they say, is another story. Several years ago, the couple decided to build another house. It is worth noting that Chemezov and Ignatov enough real estate in Moscow. For example, they own a beautiful piece of land with a river running along it in the village Akulinin. It is a beautiful and big house, but it is no different from the other inhabitants of the houses Rublevki. In Zhukovka I am supposed to appear a huge palace with an exclusive exterior and interior trim. Manual work Ekaterina Ignatova decided to take into their own hands. As she chose builder LLC "TVT RUS". The choice, of course, was a bit strange. This company has not previously been seen in the construction of exclusive homes, mostly built swimming pools, and its main activity in general stated "Production of shells, sink, baths." However, a decisive role in the choice of contractor was the fact that Catherine has long friends with the owner of "TVT RUS" Semyon Goldenberg. Conditions of work the company were offered chic - 7% of the cost of materials. It is easy to calculate that Goldenberg was to receive for his work to approximately $ 1.5 million.

First partnership went well. However, it lasted until nedolgo- works directed, invited by a professional architect. Then Ignatov decided that spent on the architect is no longer needed and refused his services.

When the construction of the house was nearing completion, it is time to think about the external and internal decoration. Here Ignatov did not change himself and turned to the old znakomoy- architect Nana Hernandez-Getashvili. The latter makes the internal decoration of the mansions of many inhabitants Rublevki, was well received in their home, and she knew many secrets. For example, someone who has to change. In short, the person tested. Hernandez-Getashvili designed rooms, meeting rooms, swimming pool, offices and so on. D. Mansion with all the decoration (the thumbnails in the photo). As a result, Ignatova and Chemezov was billed at EUR 8.5 million. What it is not surprising. Senior wife wanted to have mats for dogs and schtory by famous Italian designers, flooring they needed mosaic, part of the walls of Italian marble, the other part of the panels and ceilings are made of precious wood, doors - of sandalwood and mahogany and so on..

Ignatov and Chemezov issued Hernandez-Getashvili requested amount of cash. As a result, Italy were purchased interiors, delivered to Russia by 30 trucks and otkruzheny one of the warehouses of the Office of the President. It is time to move on to the exterior and interior design. But here's the problem. Hernandez-Getashvili insisted that the house is not ready for final finishing.

Problems there really enough. Chief among them was the roof, which put a crooked and openings in relation to vnenshim walls. As a result, the mansion numb precipitation, wet walls, so that all the time remained wet. Moreover, these wall panels were curved and install them was impossible. Thus Tolya wall was 1 meter, and even more overlaps.

Chemezov, when he was at the construction site, to come into a rage and began to shout at all. Ignatov, in turn, yelled to the representatives of "TVT RUS". Then she chose a different tactic. It became all plead, "Do not say anything more than Sergei," in the hope that the situation "on the quiet" will be able to fix it. However, the pool builders from "TW-RUS" is only bred rukami- their ability to remedy the situation was not enough. Representatives of other companies, including already built for Chemezov and Ignatova home, too, refused to take up the "mess", saying that it is easier to build a new house. As time went on, the warehouses were the interiors of 8 million euros, and the house is increasingly fell into decay.

Then "all dogs" have decided to "hang" on Hernandez-Getashvili. She put the blame that it does not keep track of how the final stage makes the house that did not start on time finishing otddelku, although the money received, and announced that she was awarded a large sum when buying interiors in Italy. First, the claim expressed Ignatov, and then supported it and Chemezov. Next story banal. ATC CAO initiated a case on the architect, she leaned on the run.

A Ignatov Chemezov and put up for sale mansion. Leads the reader entirely classified, which high-ranking pair, looking for buyers for the most expensive "wreck":

There is a project house plan:

On site there is a mixed forest with a predominance of conifers, designed landscaping.

Gas supply: GRSH on your site (the average goes low).