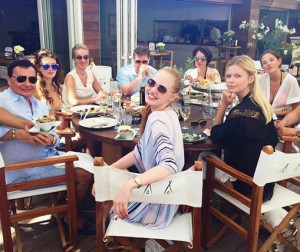 Rucriminal.com continues to talk about the most depraved of top managers of Russia. In this article, we'll discuss the managing director of "LUKOIL" Valentina Ivanova. He owns a palace in Singapore and a lot of real estate around the world, is the clock for one hundred thousand dollars, the world moves on a personal yacht and private aircraft. It is understood that 55-year-old Valentina Albertovich hard to impress a beautiful girl. He needs them to ten, and preferably from 6-7 th grade school.

This summer many glossy magazines spared the news of the wedding chic 17-year-old model Lisa Adamenko and slave owners of LUKOIL Vagit Alekperov and Leonid Fedun Valentina Ivanova. However, these celebrations were displaced. Shortly before a significant event wide discussion in the blogosphere generated information that meet Lisa Lukoil top manager began when she arrived from his native Kansk to Moscow to try to build a career as a model. And it happened when the girl is only 14 years old. And then she looked like this:

Rucriminal.com can be assumed that near Lees old guy who has it, and "rescued" Valentin Ivanov. Maybe it cost him great effort and money. Uncle Valya immediately introduced Lisa to his harem Singapore (described later), where she quickly took the position of his beloved wife. The top manager of Lukoil has surrounded his new passion concern: Putting it into a "Disneyland", photographed next to Hello Kitty. Well, where in 14 years will meet this gentleman?

Then Valentin Ivanov, like Pygmalion, Liza began to sculpt in his Galatea. Under the knife of the plastic surgeon gradually changed the lips and other parts of the face Adamenko. While Ivanov did not get the desired result.

However, in the shower, it, of course, is still a child.

When the scandal erupted around the novel top managers "LUKOIL" and schoolgirls, all human rights, Ombudsman for Children, etc., as "clams." For them, it is quite normal position, if it is a "difficult" person, and a visual signal "from above" is not. However, "Lukoil" have reflected on the company's reputation and the wedding has been organized fairly quickly. At least all pleased and photos of Lisa Valentine in their wedding clothes. Although the stamps in my passport has not been seen, the passions more verse. Now it's not a girl, to which the oil company's top manager lives with her 14 th birthday, and the legal wife.

There is no doubt that long this marriage, if it happened, and in fact, is not. Usually, Valentin Ivanov Albertovich lose interest in their passes as soon as they turn 18-20 years. No, they remain in his numerous harem, which is exported to Singapore and at various resorts. At times, it may be a dozen models, some of which have access and other top managers "LUKOIL".

But the 20-year-old "old lady" has already deprived of the status of "beloved wife." This place certainly takes the new 6-7-mi klassnitsa. Before it was a model Lisa Anastasia Rozhkova (Asya Roche).

In front of his wife Asya Uncle Wali was Alain Filinkova which even bore him a daughter.

However, the list of all the young concubines Valentina Ivanova business long and tedious.

About a year ago she commented Lisa relations with Ivanov in the group Kosti Models "VKontakte". "Why do you think if a person deals with a man older than himself, that person automatically becomes a whore, and he" wealthy man "? A new level of communication, that's what I'll tell you. Stay on your" herd ": level, and we all together are going to celebrate 55 Anniversary of my man! "- wrote Adamenko.