Producer Michael Jackson's personal physician, and Yeltsin in the arms of Russian gangsters 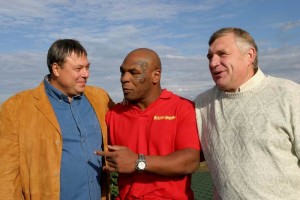 Rucriminal.com continues to acquaint readers with the secret report of Interpol, which includes intelligence information, reports of national offices in different countries, "wiretaps" materials and surveillance against people from Russia (primarily members of the Solntsevo) and related persons, among which the weight of big businessmen, former and current officials. In the fourth article we present new persons from the list of persons associated with the Mafia. Among them respected businessman Alimzhan Tohtuhunov, bought judges at the Olympics. Also on the list is present, Professor, former first deputy general director of Medical Center of the Russian Government Valery Volodin, who treated at the time of President Boris Yeltsin. According to Interpol with Russian gangsters they have been connected and the two interior minister of Austria Franz Loeshnaka and Caspar Einem.

Alimzhan Tokhtakhounov (d.r.1 January 1949) is a "thief in law" (1) and is considered a person exercising control over the "thieves in law" in Europe. He has close ties with the underworld, for example, Ivankov group in the US, Solntsevo and Mazutkinskoy organizations. He also has connections with politicians and businessmen.

(1) According to another source of information, it is not a "thief in law" and "authority" and therefore can not control the activities of the European "thieves in law". He is independent and has a relationship with the Solntsevo criminal group. A professional gambler is rotated in the artistic and show business.

July 31, 2002 Tohtahunov was previously arrested in Italy, pending extradition to the United States. July 22, 2002 the US government issued a warrant for his arrest on charges of conspiracy to fake telegraph messages, as well as bribery in sports competitions (the Winter Olympics in Salt Lake City). According to open sources, Tohtahunov was under investigation in connection with the investigation conducted by the Italian police in relation to the transfer of money from the Bank of New York, the Cayman Islands and the direction to the accounts of Russian citizens. Also it had information that the proceeds of crime re-invested in expensive furniture, which is exported to the Russian companies from the Venice surroundings.

According to the information Interpol in Jerusalem, Valery TOMEL (dob 20 December 1963) was due to Solntsevo. He was the owner of an Israeli identity card number 313858037, and led a criminal organization in Odessa (Ukraine). Israeli citizenship has been obtained it fraudulently.

Anatoly VALUSHKIN - law student who took part in an attempt to assign enterprises, owned by the victims and Anatoly Kobrin Kobrin Lucy, who emigrated to Santa Monica (CA). Following a series of threats, VALUSHKIN hired two Russians from Brighton Beach (New York) Alexei Nosov and Nathan Gosman to attack Kobrin October 22, 1995. VALUSHKIN was arrested on May 25, 1996 on charges of breaking the law and ITAR Hobbs. Nosov launched into a run.

Valery Vlasov - a well-known Russian businessman and organizer of concerts. He was killed in Moscow Solntsevo participants shortly after the trip to the US in 1994. Vlasov performed in the organization of the role of financial expert, and was killed (in 1993) during a dispute over the misappropriation of funds. Vlasov organized a performance in Moscow American singer Michael Jackson.

Volodin, Valery D. - Doctor of Medicine, Professor, Deputy Director of the Government Medical Center of the Russian Federation. He was also the personal physician of President Boris Yeltsin and managed the activities of all Russian government hospitals. He was an accomplice Tofig Azimov and Vladimir Koshelev, involved in fraudulent contracts for the supply of medical equipment and medicines. Volodin had a secret bank account "Creditanstalt Bank" in Vienna (Austria), which was 50,000 US dollars.

* Note analyst. Dr. Caspar Einem was the Minister of Internal Affairs of Austria, from 6 April 1995 to 27 January 1997. He was also a member of the Austrian Parliament.