Was the deputy head of Rostransnadzor ready for landing? 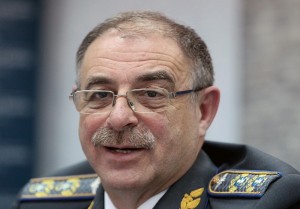 In the aviation sphere of Russia, a scandal is inflaming, which may cost the post and freedom to deputy head of Rostransnadzor Vladimir Chertok. His son Dmitry is a figurant of the case of an attempt to raid the capture of the airline "Nordavia". In the latter they say that Vladimir Chertok is trying to influence the course of the investigation. Also, using his official position, he is obstructing the activities of Nordavia. At the disposal of Rucriminal.com turned out to be correspondingly the appeal of the airline.

"05" June 2017, the head of the department of the Supreme Council of the Supreme Court of the Ministry of Internal Affairs of Russia for the North-Western Federal District, Major of Justice, RS. Butin was prosecuted against Chertok Dmitriy Vladimirovich on the grounds of the crime provided for in Part 4 of Art. 159 of the Criminal Code.

According to the circumstances of the commission of the crime, set out in the Decree on the initiation of criminal proceedings NQ 11701009701000052, Chertok DV Together with other unidentified persons, by deceit and abuse of the confidence of representatives of JSC Nordavia-RA, gratuitously turned in their favor the ownership of the shares in the authorized capital of LLC Nord Teknik and OOO Poliklinika Aviatorov owned by JSC Nordavia-RA , Which caused the latter to damage in an especially large amount for the amount of 48,383,926 rubles.

Chertok Vladimir Borisovich, who since November 31, 2012 is the deputy head of the Federal Service for Supervision in the Transport Sector, is the father of Chertok Dmitriy Vladimirovich, against whom criminal case N2 11701009701000052 has been instituted.

Representatives of the airline JSC "Nordavia-RA" became aware of the appeal Chertok VB. In the leadership of the transport department of the Ministry of Internal Affairs of Russia with verbal accusations against the JSC "Nordavia-RA". Chertok V.B. Accused the representatives of the airline of mercenary actions related to the institution of criminal proceedings against his son, allegedly a criminal case NQ 11701009701000052 was initiated by law enforcement agencies for cash consideration.

Also, representatives of JSC "Nordavia RA" learned that Chertok VB. Appealed to the deputy heads of the Federal Air Transport Agency (Rosaviatsia) with inquiries regarding the current affairs of the airline, including on the issues of limiting the validity of the operator's certificate, introduced by the Decree of Rosaviation NQ 436-P of May 31, 177. It has a significant impact on the operating Activity of the airline.

The JSC "Nordavia RA" considers similar interest in the financial and economic state of the airline and its operating activities as a potentially possible negative impact on the airline's position related to the investigation of the criminal case concerning the theft of the assets of the JSC "Nordavia-RA", the person of whom is Chertok D.V.

Considering all the above, we ask you to verify the facts set forth in this appeal and take appropriate response measures in case of clarifying the circumstances of the intervention of a civil servant - Chertok VB. In the course of the investigation in the criminal case NQ 11701009701000052 and the financial and economic activities of JSC Nordavia-RA.