Chief godfather of the State Duma 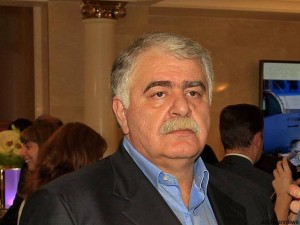 The unprecedented scandal erupted in the State Duma and the party "United Russia". On YouTube video was found, depicting one of the largest commission "thieves in law '90s for an important event - a birthday party at the time one of the most influential" criminal generals "Rudolf Oganov (Rudik Baku). Among this interesting public, according Rucriminal.com, was ... the current State Duma deputy, member of the Committee on Foreign Affairs edinoros Zelimkhan Mutsoev.

Actually, he provoked a scandal MP. It is not clear what place thought his subordinates when posted on YouTube a complaint that some videos violate individual rights, and therefore they should be removed. YouTube Administration forwarded the complaint to the channel owners - Agency Primecrime, which for many years specialized in the collection and publishing of large volumes of information on the activities of "thieves in law". Requirements Mutsoeva representatives, to put it mildly, were astonishing. On all these commercials were shots magnificent birthday celebration "criminal General" Rudolf Oganov, which took another 15 December 1997. As a result of his actions made Mutseov Rucriminal.com closely review the footage almost 20 years ago. And only after that it became clear the reason the deputy concern.

On the video you can see that the table with the guests of honor, to which he constantly sits and birthday, located a little fat man with graying hair and a bushy mustache. Near the barbel are all close friends Rudika- "thieves in law" and Jemal Mamuka Mikladze (jams and Mamuka) Roman Jafarov (Romik), Givi Gordeladze (Givi) Farizyan Nodar (Nono), etc. The behavior of mustachioed men are seen, he Oganov and other mafia-such as his own, as well as all the "thieves in law" in the hall. Moustache very cheerful, embraces guests and Rudik, raises his glass, loud claps toasts, such as: "For Rudolf Sergeevich, godfather!".

Toward the end of the holiday "thieves in law" started up in the fiery Caucasian dances to the song "The share of thieves." And then their round dance joined mustachioed guest who walks in a circle on the arm of Rudik, Vladimir Oganov (Vachikos Six-fingered), Revaz Tsitsishvili (Tsitska), brothers Mikeladze, Nono. In this dance all only "thieves in law" and, of course, you can decide what and barbel is also a prominent mobsters. But no. According Rucriminal.com, is our main geroy- current State Duma deputy from the "United Russia" Zelimkhan Mutsoev.

Rudolf Oganov was killed soon after the day of birth. He was killed in a battle with his chief enemy "thief in law", Aslan Usoyan (Ded Hasan). But most members of the close-knit family of thieves Rudik alive and relatively healthy. And they are, as it turns out, has its representative at the highest level. (And why all this talk, that the criminal breaks into the power he has long been there).

It is worth noting that in this connection Zelimkhan Mutsoeva the mafia does not end there. It turns out that in 1998, the brother of the deputy - Mutsoev (Mori) Amerkhan Alikoevich, the number of bases in the Interior Ministry, as a "thief in law". That's so gay parliamentarian teaches Russians observe the laws. And, perhaps, the general public and not to reveal the secret Mutsoeva if he had not decided what the YouTube «clean up».