Rakishev in US court told the truth about letters with minors 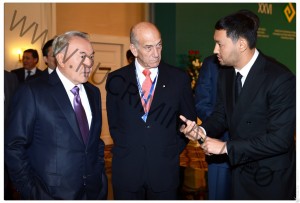 For a long time there has been a scandal over the addictions of Kazakh businessman Kenes Rakishev. On the site Kazaword was published a vast correspondence businessman. In addition to business messages, there were also personal ones. And, very specific. In particular, Rakishev's correspondence with Pogrom No. 1 by Peter Listerman. What was discussed in it, rucriminal.info will tell a little later, but for now we will describe the reaction of Rakishev and Listerman to what happened. Listerman immediately achieved the removal of video clips with presentations of girls for Rakishev from the Internet. Like, this video is from a personal archive, not intended for public display. Which is not surprising. Girls call their age and it's very interesting.

Rakishev has never publicly spoken on this topic. But his lawyers, as undermined, in various regional courts of the Russian Federation "stamp" the decision to remove the content about "Kenes youngsters" under the pretext that this is a complete lie. They say, "fake" correspondence, Rakishev decent family man and underage girls did not write to himself.

And, probably, you could believe it. But at the disposal of rucriminal.info was the transcript of the protocol of Rakishev's interrogation in the US court, where the lawsuit of BTA Bank was examined against the former owner of the bank Mukhtar Ablyazov, the ex-head of the capital of Kazakhstan Viktor Khrapunov and his son Ilyas Khrapunov. Rakishev testified under oath, and if he were "caught" in a lie, he would go to prison. As a result, Rakishev with great reluctance acknowledges the fact of breaking his personal mail, which he used from 2004 to 2014. Why does it reluctantly? In fact, in this way, Rakishev confirmed the authenticity of his correspondence with "pimple No. 1" Peter Listerman, who had earlier leaked to the network. Now the question arises: how does Russian legislation relate to entering into sexual relations with a person under the age of 18? And it is unequivocal, for this is a long time. Whether he is waiting for Kenes Rakishev time will tell.

An analysis of the correspondence shows that the cooperation began in 2007, when Peter Listerman's assistant sent Rakishev photos of two girls with comments that one of them was designed for Kenes himself, the second "for the elder". The speech may go as a son-in-law of Nazarbayev Timur Kulibayev, with whom Rakishev is closely associated. One of them is the 18-year-old Dasha Konovalova, the other is Alina Garayeva.

In 2012, the situation takes an interesting turn. July 11 Listerman sends Rakishev letter about "Elenu S.", which contains only a video with 15-year-old Elena Selezneva. On the record the girl defiles and it seems, her age is clearly heard. Rakishev's minority does not bother, he immediately answers Listerman: "Super! Skolko? ". Instead of the answer, the oligarch gets another video with 21-year-old Matilda Romanova and 17-year-old Alina Marasik, another minor girl. Both unassuming young men Kenes Rakishev calls "super variants".

Next time Листерман writes in July, 2013, sending video of certain model which dreams to act in film from James Kemerona and carries a nickname "Avatar". Rakishev, without thinking for a long time, answers: "Give her to Kazakhstan!" Then Listerman sends another video with a dancing girl, for which she asks $ 100,000 for three days.

There is the following correspondence, which ends with a letter from Rakishev: "Let's contact after the Ramadan after August 8!". It should be noted that Kenes Rakishev, as a Muslim, prefers not to sin in the holy month, even the pictures from his hajj to Mecca appeared in the press. Listerman does not share the religiousness of the oligarch, and writes that "such a beast is sold once a year." Rakishev concedes and asks to send the girl to Kazakhstan "this week." Listman continues to send letters with photographs of the girls whom he calls "translators" and in 2014. Obviously, the seller and the customer have some kind of additional communication channel, exchanging by mail only photos and video.

And now rucriminal.info publishes a printout of Rakishev's testimony in the US court about alleged "fake" correspondence.

Question: Mr. Rakishev, has BTA Bank never been a victim of hacking email?

Q. At the moment, I'm not asking you to provide any details about the hacking. This is a simple question, do you know that BTA mail was hacked?

R. I'm not sure I can answer this question, because I'm not an expert in IT matters.

Q. And have your personal letters ever been hacked?R. I believe I can say-yes. More precisely, by my personal e-mail, I can not say that it was hacked. I just lost access to my email, which I used from 2004 to 2014.

Q. Did the contents of your letters ever appear in places beyond your control?

R. Can I clarify? Are you asking this question in this particular case? Because in my personal letters, there was nothing relevant to this matter.

Question: Maybe. I'll ask more broadly. Have your personal letters ever been stolen?

R. I want to repeat again, starting in 2014, I did not have access to my personal, not corporate, email address

Q. Mr. Rakishev, have you ever heard of the Kazaword website?

Q. BTA Bank and you took the position that Ilyas Khrapunov is responsible for hacking an email that appeared on Kazaword?

R. In fact, you answer your own question.

Question: Mr. Rakishev, my question is this. Do you know that the lawyers of the bank in which you are chairman of the council took a position in the US Federal Court that Ilyas Khrapuny is responsible for the theft of letters that appeared on Kazaword?

R. Actually, different lawyers have different theories in relation to this issue. I believe that the court will be able to answer this question.

Q. Let me say. I do not want to know what your lawyers told you privately. I want to warn you not to go this route. Do you believe Mr. Rakishev that Mr. Khrapunov is responsible for hacking an email that appeared on Kazaword?

MISTER. SCHWARTZ: Objection. This is so important, what does he think about this?

MISTER. Curly: He can just answer the question I asked three minutes ago and we'll go through this.

R. Counselor, can I ask a question? How relevant is this issue to the proceedings that are taking place now?

Q. Let me state it differently. Have you ever discussed hacking email with Mr. Nurgabylov?

Q. So you say that your personal email account contains messages that you did not send, is that correct?

Q. Mr. Nurgabylov discussed the Kazaword website with you?

R. There are many people in Kazakhstan who are discussing this site.

R. I would like to repeat, if this situation had even the slightest relation to this particular case, I would be ready to discuss this with you.

R. It's not my duty to seek proof.

MISTER. Curly: He did not answer, that's the point.

R. I believe that I answered this question with a question. This is not my technical expertise. How can I tell you whether this is true or not?

Q. Did anyone ever tell you that they suspect that Mr. Ilyas Khrapunov is responsible for hacking an email that appeared on Kazaword?

MISTER. SCHWARTZ: Protest, and I advise you not to answer this question.